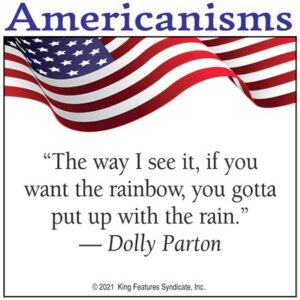 To the person on lower Camp Branch with the nine or 10 black angus cattle running loose: Please pen them up. We live at the top of Little Colley and they are destroying our yard and carport. We are going to have to call animal control. This is the second time I have warned you. Thank you.

I am responding to the comment about the thief and liar in McRoberts: The caller better get his story straight. I have never stolen from anybody over in Deane and I am not a thief.

To all you unvaccinated people out there: I don’t hate you, but please consider getting the shot before our way of life is damaged even more than it already has been. I would be lying if I said I wasn’t a little fearful of getting the shots myself, but I did get them, and it feels great knowing I am protected from dying of COVID. With this new Delta variant of the virus, it is just a matter of when — not if — you or one of your loved ones gets sick and dies.

Major stock market indices are up from eight to 13 percent in only the six months since President Biden was inaugurated. What good news for my retirement investments.

They ought to do away with food stamps and welfare checks. These people who draw food stamps go to the grocery store and get more than what they need to eat. Some of them also get away with pawning their food stamps for things they don’t need.

This is concerning the person who called in about the vaccinated versus the unvaccinated in Letcher County. If you’ve been vaccinated, take a magnet and put it at the spot where you were vaccinated and see if it sticks. I tried this on my friend who had the vax, and yes it sticks. Tell me what you think about that. I am waiting.

This just in from the Real News Network: Donald Trump is no longer is office. He’s been out now for about seven months. Pass that along to CNN.

I’ve lived in the Linefork community, on and off, for 35 years. I was over there last week and could not believe the shape the Lilley Cornett Woods are in. It is in disarray and looks so, so bad. What has happened to our Lilley Cornett Woods that Linefork residents have held as such an honor? Whatever has happened needs to be addressed. It needs to be cleaned up. Weeds up our eyeballs? There has to be some other place to plant them besides where you pull into.

I am surprised by how you yellow-root ginseng hunters never come down to Doty Creek to dig. It’s around here; all you have to do is find it.

It is sad to watch our United States Senate protect the filibuster to protect the rights of a minority party that stole two Supreme Court seats, stood by while more than 500,000 Americans lost their lives to COVID, and refuses to take part in the insurrection instigated by their leader that killed and maimed police officers.

To a certain person: If all these people know so much about me, just imagine what they know about you and your lowlife family.

I once knew a small girl who used to live on Turkey Creek. She was one of the nicest girls I ever met. I would like to know whatever happened to her. She was as old as we were, but she looked like a little girl.

Concerning the comment about the need for daycare, back in early- to mid-1970s, I took care of six children in my home. I had a license. Look at all the young people out here today who don’t work or won’t work. They could babysit in their home. It doesn’t cost much to have a license. Back then I charged $40 a head, and it was from eight in the morning until five in the afternoon, ages infant to five years old.

The Democrat Party in Washington, D.C., is holding the American people hostage. What is wrong with that bunch?

To the caller who answered my comment about ‘wokeism’ and said I was the local Klan representative: I must have struck a nerve in your weak mind because you know my conclusion about wokeism was based on the truth. Furthermore, I think it would be wise for you to see a shrink concerning your severe case of narcissistic megalomania. And as for me being a local Klan representative, I am not a member of a clan, especially the wokeism clan.

To the person who keeps telling me I am going to die and meet God: Sooner or later we all are. I know who you are, and you are not knowledgeable about worldly things, let alone the Bible. When you have such little knowledge, you should keep your opinions to yourself, because on Judgment Day you will have to give account for every word.

Now that the Republican Party has a terrorist wing, why don’t they carry out attacks against North Korea or Iran instead of hating the United States even more?

To the person who commented about tattlers: I know who you are talking about. That’s just fine. I had rather be a tattler than a rip, because when you are married you are supposed to be true to your husband, not everybody else’s man.

I don’t think it’s right that those of us who have been vaccinated against the COVID will also have to start wearing masks again. We should be able to show our vaccine proof and remain free to live our normal lives. Only those who don’t have the vaccine should have to wear the masks again.

To an old grouchy person: I will keep giving you all the dirty looks I want to. You know why I am giving them to you. When I come face-to-face with God, He will be my judge, not you and not the neighbors.

To a certain person: I don’t look like Grandma Hog, and I smell like a rose. I have a good life and you are not included. You don’t have to worry about people leaving you alone. You are alone, period.

I would like to leave this comment for Judge Adams concerning the help the county will get to help clean up the flood damage: If you haven’t looked at the Lilley Cornett Woods bridge, it is really congested. The workers who used to be there kept it clean of debris, but that is not happening now. If this isn’t addressed the bridge will be gone.

You know, you need an address to get a job, but there is no place to live in Kentucky, which doesn’t have much to offer. Everybody lives off the federal government, but you can’t get a job if you don’t have a home.

Who is the person who blocks the exit of the rec center with their big black urban attack vehicle? Are they just trying to show how rude they are? Or are they unaware of what those parking space lines are for?

I take it these people who refuse to take the COVID vaccine would be okay with bringing back polio and smallpox.

The Republicans are now trying to blame President Biden for prices going up. When the prices went up under Donald Trump, they didn’t blame anybody. When the prices go up, who makes the money? It’s the billionaires, and then they try to blame it on the working people. They can pay people honest wages and still make billions of dollars, but they won’t do that. They pay them the least they can and squeeze them and then blame them for getting welfare when they can’t afford to live.

I went through Whitesburg the other day and saw a certain woman walking into an apartment. Wonder what happened — did her man finally catch her with her lover? I guess she finally got what she wanted.

To the person who called in and said they won’t get the COVID vaccine: Have you never been vaccinated throughout your life? Not for chickenpox, measles, mumps, and all that? Unless you have lived under a cliff or in the head of a hollow so deep you can’t find the sun shining, you have had shots. You know, sometimes are colors truly show and so does the percentage of our mind that works. I believe yours is at 38 percent.

I’m calling about Texas and Oklahoma wanting to join the Southeastern Conference. If you want to run with the big dogs, you have to come where the big dogs are, but I can’t imagine Alabama and Texas playing in Texas Stadium. I don’t know how many seats that place holds, but they would have to put some more seats in there, because it would be flooded with fans. Just looking forward to it and thinking about Texas coming to Lexington to play the Wildcats. That would be something to see, too. Texas and Oklahoma will be getting into a tough conference, I’ll tell them that right now.

Why does this county even have a dog warden? You ought to see all the dogs on Thornton at Goldenrod Drive. The county won’t do a thing about it. We don’t have anyone who will do anything.

Every last person who took part in or helped plan the January 6 insurrection and continues to help whitewash and defend it needs to be executed. And mealy-mouthed preening pukes who call themselves patriots while betraying the United States need to be treated to a real special exit.

To the person who said 62 percent of Letcher County people are smart enough not to take the vaccine: I had the vaccination months ago. Not a single issue because of it, not even a sniffle. If you think it makes you look smart or tough to refuse it, go ahead and you kill yourself off, but don’t get in my face puffing and blowing and spitting, or you won’t need to worry about the virus putting you down.

Mr. Biden needs to keep his mouth shut when it comes to Israel. The nation of Israel does not need to hear anything from him. Israel is a sovereign nation and most of all they are God’s chosen people. The Biden administration is working against anything that is right for our own nation, but I have some good news for Israel. Every nation that comes against them will be destroyed. Israel will be a nation long after Iran is buried in the sand. Also, Mitch McConnell is useless. No more will I vote for him as he has taken sides with Democrats to destroy our nation. We the people must stand for what is right in our nation and stand with Israel.