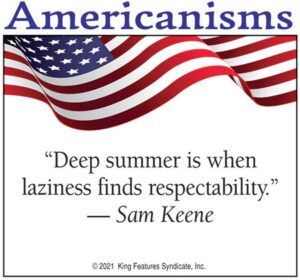 I’m sitting here in my house next to Wright’s Hollow trying to watch TV. I have no air-conditioning, so I have my windows open. At about 3 or 4 every morning a dog is barking constantly in Wright’s Hollow. I guess we don’t have a mayor or police force that cares. If they do care, they will go up in Wright’s Hollow and just listen to the dog that barks constantly. You can also hear it on Brickyard Hill and on B&O Hill. For God’s sake, please, if we have any kind of mayor and police force in Jenkins, do something about this.

It’s nice to see Kentucky Fried Chicken fit right in with our other fine dining establishment. This makes twice I’ve been there since it opened, and twice I have ordered the classic chicken sandwich and received the spicy sandwich instead. That makes me so very happy, especially when they don’t bother to include napkins as well. The fries are pretty good, though, and the workers were trying their best with the large crowd they were dealing with. While I don’t like the spicy sandwich, it did appear to be well prepared. Hopefully, they can get my order right the next time.

This message is directed to the slumlords of Burdine. You need to do something about the dog and puppy farm one of your tenants currently operates. You need to take action before you are found liable for this.

To all you good people out there: Quit sending your money to these lying preachers out there. The Apostle Paul said he would preach without charge, and that if he did charge, he would be abusing his power. You all are good and wonderful people. Do not pay that trash.

I love Speak Your Piece, but I believe each comment should be cut down to 20 words or less so we could all get our fair share of comments in. The people with computers take up too much space. Thank you, Speak Your Piece. I am so glad you are there.

Speaking about Taiwan, the leader of China said that any foreign government that goes up against China’s 1.4 billion people will be going up against steel Great Wall. My question to you, President Biden, is what are you doing about China? I am concerned about my children’s children and right on.

I was pleasantly surprised to find four coupon inserts in this past edition of The Mountain Eagle. I don’t think I’ve ever seen that many before. Yay. This is awesome and thank you. Keep them coming.

Why are all the employees at a certain pharmacy so rude and hateful to customers? I’m just trying to pick up my prescription. It’s not my fault you hate your job.

Why have the Fleming-Neon Police not questioned anyone in the murder of Thomas Wright?

This is in reply to the caller who said a magnet stuck to somebody’s arm after they took the COVID-19 vaccination: My whole family has been vaccinated, and a magnet didn’t stick to anybody’s arm. So, I think the magnet thing is kind of a joke.

After everything that we’ve been through as Americans in this country during the past year, don’t you think it’s time — at least in Whitesburg — to stop spewing our guts at each other and start speaking God’s peace to each other?

Well, Jenkins, we have a problem. We have a brand new football scoreboard, but we do not have a football team.

In this comment, I am not trying to minimize or justify the event that took place at the United States Capitol on January 6. But on July 27, a Capitol Police officer testified they were not equipped or prepared for what happened. Why? How could a group of flag-waving people armed with bear spray overrun and occupy the U.S. Capitol? I am very concerned why this was allowed to happen. Why was the Capitol Building so easily breached? Maybe it’s time to investigate all the people in charge of Capitol security. We need the whole truth.

Bill and Josephine Richardson have contributed more than perhaps most in Whitesburg may realize. I was sad to hear that Cozy Corner is closing its doors. That small, but significant location was an oasis of hope in the city. Through Josephine’s inventory, the citizen and the tourist could celebrate the best and brightest of Appalachian heritage. There is so much nobility in the history of Whitesburg that needs to be discovered and celebrated. There is also so much nonsense today that needs to be addressed. Sometimes it takes an outsider to remind us of those things. Through their love and respect for the people of Letcher County, the Richardsons — and Cozy Corner — offered a way to learn and to grow a more healthy and loving community.

To all those idiots out there: When you see a poor person working their hindend off on the road, at least go a little slower instead of acting like you are trying to run over them. At least they are out trying to make a living out in this hot weather. I saw some of you rev up your engines. Have the courtesy to let those folks do their work. I saw some of you doing it.

The trips down to Austin, Texas, and Norman, Oklahoma will really be something for UK basketball and football, and I am really looking forward to it since the invitation to join the SEC has been given to Texas and Oklahoma. But what I’m really worried about are folks like myself who will have to pay the price. The SEC will want more money no matter who your satellite or cable provider is. There is always a price to be paid.

First, I want to say that I love the Levitt AMP concert series. I enjoy going up there and listening to the music, but I think people should leave their dogs at home. I know people want to socialize their dogs but doing at a concert setting with kids around is not the place. Leave them at home and come and enjoy the music. Be more considerate. That is not the time or the place to socialize your animals.

What are the millions of people going to do when the Colorado River dries up? The Hoover Dam has already lost enough of its water table to reach the Statue of Liberty.

Where is the drug enforcement task force for Letcher County? Aren’t you ever going to clean is up and make it better for the people? It’s getting way out of hand. It needs to be fixed and fixed soon.

Anymore, marriage is a thing of the past. Very few are faithful. One woman I know from Linefork is sure not honest in her marriage. She needs to get some help before she ends up in bad shape.

I know a fellow who was locked up for two years and is already back to snorting pills and shooting up. Family, leave him locked up the next time. If not, dig a hole for him because he’s not going to stop.

I was just wondering how people on Social Security Disability and SSI can draw a check every month and still work six to seven days a week while people who aren’t physically able to work can’t draw a dime. I’m going to call the Social Security fraud line.

I’ve heard all this talk about Jenkins growing and how pretty it is. Well, I drove through Jenkins the other day, and this is what I saw: A bunch of fallen down and abandoned coal camp houses. How does that represent Jenkins being so pretty? One place downtown is a car lot with about 14 cars parked right in the road. It beats all I’ve ever seen.

I am disappointed in the Neon Fire Department’s response time. One morning an ambulance was called for me for when I had lost consciousness. I got the official report from Kentucky State Police which shows they took eight minutes before they left to come and get me, and 17 minutes to get on the scene. They also show up looking unprofessional. I have seen them show up wearing Crocs and cargo shorts. However, anytime I see Letcher they are always in uniform.

To the caller who said, ‘And as for me being a local Klan representative, I am not a member of a clan, especially the ‘wokeism clan’’: Sounds to me like I struck a nerve, Klanner-boy. Crawl back into your Klavern’s sewer and shut your mouth.

First, I want to thank The Mountain Eagle for Speak Your Piece and allowing the citizens in this area an opportunity to give our opinions and also give us an avenue with which we can expose and give a warning to everyone about the thieves. I may have missed something, but the thief in McRoberts just confirmed to everyone that he is truly a thief by saying he hadn’t stolen from someone at Deane. Once a person gets caught, he or she always plays the innocent victim. A liar is a liar, a vagrant is a vagrant, a scumbag is a scumbag, and a dope user and dope dealer are worse than the others. Honest people work hard and struggle to have what they’ve got and then a thief comes and steals it. Thief, one day you will steal from the wrong person and then you will pay the price. If people know you, they would be well advised to keep you away from their property.

To the person who claims the Democrat Party in Washington, D.C., is holding the American people hostage: The Democrat Party is the only thing holding out against the terrorists and traitors that are taking over the Republican Party.