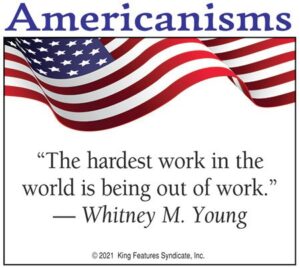 While we’re on the subject of the school traffic, I don’t know if all the rah-rah mommies and ding-dong daddies realize the Letcher County School System spends a whole lot of money each year on those big old yellow things that have seats from one end to the other and will come and get those children pretty much right at their door and take them right back to the door. Just putting children on the bus would take care of a whole lot of the traffic.

I have a complaint about some used and torn up equipment on Highway 119 in front of my house. It will make me lose the value of my house, and I think this needs to be stopped right now by the Jenkins City Council. Thank you.

I visited Sackett Loop on Route 7. If you want to see a brilliant engineer work, the bridge doesn’t connect to the street. Haven’t they ever heard of a temporary bridge until they get the new bridge completed? The houses one person owns are so run down. The grass is not mowed, the fence lines are grown up. He took such pride in his places. The people there sure miss him. Sackett Loop doesn’t look the same.

I would be ashamed to put a picture of that health department building in the paper. That size of building should be in a big city, not downtown Whitesburg. When it was built there was a lot of talk of such a waste of money.

How do meth-heads get away with driving cars with no license plates on them?

I am so ready for my chemistry test.

. I would like to thank the Letcher County School System for the good job they have done since this new COVID outbreak. They Letcher County system took the necessary precautions and have remained open while other school systems have had to shut down. So good job on putting the safety of the kids first and on being prepared.

It’s a shame we live in a county like the one we live in with garbage all over the place. We used to have pride, but that’s gone to the dogs.

My grandpa was a snake handler, but the day he would handle a snake he would first put it in a cage with a chicken. Every time that chicken would move, the snake would bite it. Come that night when my grandpa would handle it, he would only handle his snake because it didn’t have any poison left in it. Praise the Lord.

I think somebody needs to tell the president to tell the Taliban that we have a military they can’t complete with. He needs to send about 10 or 12 of those B-1 bombers on a low flyover, followed by a fleet of B-52 bombers. Then the president can tell them he won’t talk to them until he gets their attention. You have to have some backbone and some guts.

I am a healthcare worker, and I would like for some of these parents and other people who are against wearing masks to come and spend one month taking care of COVID patients like we are. And another thing: I cannot believe Jenkins is having their festival this year with COVID running as high as it is now. Are they going to rename it the COVID Festival?

To the mayor of Jenkins: Are there any competent police working in Jenkins? This question will come up again between now and when we vote for mayor. Thank you.

To the people who are old like me: If you think you’re going to be attacked, take that hearing aid out of your ear. I had a little runin with a boy about half my age — I’m 67 — and he hit me in the ear, hoping it the hearing aid would explode in my brain. People our age need to study this and take a martial arts class on how to defend ourselves. They are trying to kill us. What got me started was when he tried to push me out of the road and I confronted him.

To my friend in Morristown, Tennessee named J.D.: He has friends who love to read The Mountain Eagle and Speak Your Piece. This is the old cat killer. Give me your name and address and we’ll see about getting you a year’s supply of The Mountain Eagle, which is wonderful. Have a nice day.

People, when a man can’t even govern the border with Mexico, how do people expect him to govern Afghanistan? He’s pulling a late train, people. I hate for him; I hate it for all of us. May God have mercy on all of us.

I saw a guy in Jenkins the other day who was accused of doing some things in front of little girls. Do some research on this guy.

As bad as this mess in Afghanistan has been with the current administration, just imagine how terrible it would be if Trump and his crew were still in office. Trump would have just left everyone over there, including United States citizens, the minute it looked like the military leaders and intelligence agencies screwed it up so that he wouldn’t have to take the blame.

I despise Joe Biden, but he did make sense about one thing. If Afghanistan’s army, one of the largest in the world at 300,000 strong plus military equipment from the United States, can’t fight against 75 nasty old men they ought to have their hind-ends kicked. Let them go to hell.

This is to the Democrat Party, the liberals, and this administration that’s in charge right now: It’s come home to you. All this telling everybody, ‘we’re in charge, we know what we’re doing, and we’ve got everything under control’ is coming home to you. Now you have dues to pay, and you will pay them in full. Thank you.

Sheriff Stines, I think you’re a very good sheriff. I think you are trying your best to help us, but I would like to give you a little hint. Could we get someone on Colly to set up some kind of road check for license and insurance? I think you will find a large number of people there driving without a license or with insurance. And I know you will get a bunch of drugs if you set up the road checks. Right near the mouth of Low Gap would be a great place to start. Thank you, Sheriff Stines, you have my vote in the next election.

I would like to let the people in the Blackey and Isom area know that the Burton Hill Bandit is back out of jail.

All the Democrats and all the news organizations are bragging on television about what the U.S. is doing for other countries by donating free COVID vaccines. What about all those COVID cases that are coming across our southwestern border? Ain’t they real smart?

To the caller who said I accused them of being a weak-minded intolerant individual: In your own reply, you proved that my accusations are correct. You really are a feckless person, and you don’t have any type of authority over me, my Christian beliefs, or my God-given freedoms. And you further proved correct my conclusion that ‘wokeism’ is a hateful, intolerant ideology.

Letcher Central’s volleyball team is the best I’ve seen in years, but with that much talent it must be hard to play them all. That would be a hard coaching job, because some of the kids who don’t get to play are just as good as those who do get to play. But, I don’t think the players should be picked because of who their parents are.

I just read where someone was already saying Lee’s chicken is better than KFC. Well, I’m sorry, but Joe’s chicken beats the both of them. Thank you.

Guess what, boys and girls, your property taxes are going up. Guess why? Doctors and nurses are making fortunes. But not all of us are doctors and nurses, so what’s going on? I thought our tax rates were based on individual things, not just going across the board because of a few.

I see Mitch McConnell loves to gloat over the difficulties in getting U.S. citizens and interpreters out of Afghanistan, but conveniently forgets that Biden has been in office for seven months and during the four years of Trump’s presidency it was terrible trying to get visas for refugees and people who helped us so much in Afghanistan. Many U.S. veterans have tried for years to get visas for their interpreters that helped them and saved their lives. But Mitch didn’t seem bothered at all at keeping them out, but now he loves to gloat. What hypocrisy.

To a certain person: I didn’t call you in the first place. You invaded my privacy and eavesdropped on my house. If you ever want to give me a knuckle sandwich, go ahead and try it. I’ve got some knuckles for you, too.

What is going on with a certain health care provider’s telephone service? You can’t get through to anybody. Something needs to be done about it before somebody dies because they can’t get help.

Does anyone have any idea what kind of vehicle the District Two constable drives? I’ve never seen one, so I was just wondering.

Yes, if you want to fight the rats try the stuff called One Bite. If you have creek rats, make sure you try it, but be sure your dogs or other animals can’t get it. Put enough out there to last two days and see what happens.