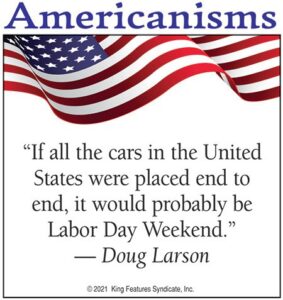 My wife voted for Donald Trump and still believes he got cheated out of the election. I’m going to take her off my checking account and quit paying her car payments. I am through with her. She can go to Mar-ALago and live with Trump.

I’ve just been waiting for all these lawyers to come on the TV saying, ‘If you have had the COVID-19 vaccine, call me.’ You’ll see people running to get vaccinated then.

The rulers in Great Britain are calling Biden’s move in Afghanistan imbecilic. One officer there who fought in Afghanistan said Biden should be court marshaled.

This is to the Jenkins School System: As a taxpayer, I think it is pitiful to spend $200,000 on the gym at the high school when you don’t even have enough players to play basketball. Where are our elected board members? We can’t even get decent drinking water for our students, yet the school can sell it for $2 a bottle. That is pitiful. Where are our board members?

I want to put this in the just wondering category: I see these Afghan-Taliban soldiers over there carrying heavy weapons. Are those weapons that at one time belonged to us, or did they get them from China or Russia?

(According to multiple reports, the Taliban took ownership of the U.S.-purchased weapons when the Afghan army laid them down.)

Every time I drive up into Chopping Branch in McRoberts, I see cats all over the road. I asked someone whose cats they are and was told some lady took off and left them. There are about 20 cats and kittens there altogether. You have to stop and wait and wait for them to get out of the road. If the county has an animal control officer, I wish they would come and do something with all these cats. They are a nuisance to everyone.

I went to the Letcher County Courthouse the other day to pick up an application after hearing they were looking for workers. Lo and behold, I found out the pay barely is minimum wage. How do you think anybody is going to take a job working for $7.50 an hour when you can get more than that on food stamps and welfare? And I wouldn’t drive the junk they have for $25 an hour. They are rolling deathtraps. A county worker told me the other day that they are ready to refuse to drive the county vehicles and equipment because they are so bad.

As a TVS Cable subscriber in Whitesburg, I am beyond peeved off by this cable company’s continued failure to bring us Cincinnati Reds baseball. If The Mountain Eagle would go through its archives, they would find that the main reason the Whitesburg City Council granted the CATV franchise to TVS in the first place was because of TVS’s pledge to carry Reds baseball when the company they replaced would not. It is beyond disgusting that we can’t get access to our regional baseball team on the same cable that finds room for disgusting stations such as OAN and Newsmax. The Whitesburg City Council needs to address this matter immediately. I would also love to hear an answer to my comment from someone at TVS Cable.

I wonder if anyone in Letcher County knows if we have a dog warden or animal control officer? Our county judge and magistrates seem to be the worst county officials in the state of Kentucky. The dogs and cats are taking over in McRoberts. When I visit my parents in Chopping Branch, the cats are everywhere.

I saw on the news where Joe Biden is bringing those people from Afghanistan here to America to live. Doesn’t he know he’s going to bring trouble to this country by bringing them here?

Well, the county came up on Pert Creek yesterday and fixed a really nice private drive up to one house. That’s nice, but I can’t even get them to move a truck that’s in front of my house blocking traffic. Wait until election time comes, we’ll see who gets voted for.

Every Saturday morning on Channel 91, wrestling comes on about 1. They only show three or four matches, then go off the air for a little bit and then come back on. You see the same old thing that’s been running on TV for the last four years. It’s called Appalachian Mountain Wrestling. It’s the same old garbage. And then we have Ohio Valley Wrestling, which is awful too.

We hire them, educate them, and send them on to Whitesburg. We should do just like Pound, Virginia did and get rid of our police department. They are a sore on the backs of us taxpayers. Thank you.

There is always a backlash to everything, especially when the United States pulls out of a country like Afghanistan. There is also some recent information about huge amounts of lithium and rare earth metals are in Afghanistan, which brings one to wonder when the Chinese and the Russians start to invest into Afghanistan again. No one is saying anything about this, but it should be addressed, because if we’re going to go to a battery-oriented society we will need lithium and Afghanistan has a lot of it. I wish the United States had stayed in Afghanistan, but I’m just a subscriber to The Mountain Eagle with no political aspirations.

The person who quoted John Wayne and said people who don’t take the COVID 19 vaccine being stupid: Honey, I’m here to tell you that you’re getting ready to find out that if you are vaccinated you are the one who screwed up, not me.

Did you ever wonder what President Eisenhower meant when he warned about the military-industrial complex ruling the United States? Well, just look at President Biden’s decision to get us out of a 20-year war we should have been out of long ago shows us exactly what Eisenhower, the former top general turned president, was warning us about after the Korean War. If you doubted there is a deep state where the military is concerned, just look at all those who are now criticizing Biden’s decision with the help of the big TV networks and the big national newspapers. They are the generals and civilian advisers who got us into Afghanistan in the first place, and the defense contractors and think-tanks they now work for stand to lose billions of dollars now that we are out of that awful place.

To the caller who continues to attack me over his hatred of ‘wokeism’: As for your ‘God-given freedoms,’ they end where my freedoms start. You can believe anything you want as long as you keep it out of my face and out of my life. Your church doesn’t run things in this country, and the best advice I can give you is to learn to live with that. There’s not a penny’s worth of difference between people like you and the Taliban.

How low can people go? Pretty low when you see something like the Facebook message and photo posted by a professional educator employed by the Letcher County Board of Education. I hope the woman who was the victim of this educator’s post takes significant legal action against her, as that comment is slanderous and was most certainly posted with malice and forethought. Someone needs to work on her principles.

Do Letcher County’s judge and magistrates have any shame? Apparently not or they wouldn’t allow our county’s ‘scenic byway’ across Pine Mountain to look so bad with litter scattered everywhere. What an embarrassment.

To a certain person: If you would just come out of Adams Branch and let everybody know we are an item, things would be much better.

I am calling about Highway 1148, the Little Colley Road. Do they ever plan on blacktopping this road? It is like driving on a washboard. People who have to travel this road every day would like to know what’s going on. Thank you.

Mrs. Lois Greer is to be commended for her many years of service as curator of the David A. Zegeer Museum in Jenkins. Best wishes to her as she retires. With a new curator there are many things that can improve the museum. One would be a revolving display each month, publicity for the museum, new and innovative ideas for the public, special programs at least once a month, inviting school groups to the museum to explain the history of coal and the railroad in the Jenkins area, have an active group of volunteers to lend their help, and a board that meets on a regular schedule. This museum is a jewel in the mountains.

What happened to the widening of KY 805 from US 23 into Jenkins or the widening of US 119 from Whitesburg to Jenkins? Eastern Kentucky deserves more than promises from our state and federal elected leaders.

One big eyesore sits in the middle of Jenkins in the Beth-Elkhorn shop area. Garbage, grass not mowed, scrap metal — it is a shame that the absentee owner does nothing to improve the property. Thank you.

In response to the comment in Speak Your Piece last week about the LCC volleyball team: We must keep in mind how difficult it is to get a coach. I am thankful to those who donate their time and are not paid. To win, we all must accept our child’s role in the game. After all, not everyone will play at the college level. Not everyone can be a starter. But everyone can contribute and be a team. The reason we can’t win in this county is because everybody is so petty. It is me, me, me. So, let’s think about this.

No wonder everybody is leaving Letcher County. The ditch lines are full of garbage, trash is everywhere, we have no one who abides by the rules, and people won’t do their jobs. It is a shame. The trash situation has gotten way out of hand. Letcher County needs to do something about it.

I like how smart the Republicans are. They are against the COVID-19 vaccine shot, but they will go in these hollows and get a shot from their dopehead neighbors to put into their veins. That is what you call stupidity.

I would like to leave a tribute to a beautiful angel from Linefork. You had a heart of gold, and I am going to miss you. It will not seem right without seeing your beautiful smile. Going to miss you, Little Smiley.

They will love you all the way to the bank, but not coming back.

I want to comment on Joe Biden and the mess he has made in Afghanistan. Why on earth isn’t that man thrown out of office? He needs thrown out by the seat of his pants, along with every general around him. Thank you.

On August 30 the last five United States jets left Afghanistan. The general in charge of the evacuation said that not one single American citizen was on any of those planes. Now is that the great evacuation program?

In 2018 Trump orchestrated the release of Taliban leader Mullah Abdul Ghani Baradar from prison. Baradar is now set to be the new President of Afghanistan.

To the caller who criticized President Biden and said ‘it’s come home to you’ to the people who voted for him and added that ‘now you have dues to pay, and you will pay them in full’: Bring. It. On. Please. The sooner you traitors get suicidally stupid, the better. I’ve listened to you people blow about what you were going to do to anyone that disagrees with you for half a century. Either back up your mouth or shut it.