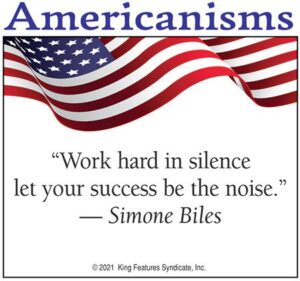 Can someone please explain to my aunt that there is no such thing as ‘mouth deodorant?’ Bless her heart, she was hoping to go to Walmart to look for some.

I’m glad that almost every school board in the state is trying to protect its students from dying of the virus, since Robert Stivers and the Republicans are so willing to sacrifice them to suck up to Donald Trump.

If the City of Fleming- Neon can give its workers an extra $10 an hour in pay for a month through the American Rescue Plan that was signed into law by President Biden, what will the City of Whitesburg do for its workers? The Whitesburg City Council should bring this up at its next meeting. After all, there is a provision in the stimulus package that allows municipal employees to be given bonuses for their work during the pandemic.

I think kids with head lice should be able to remain at school and sit with all the other kids in class. Kids with lice have rights, too. Treatment should be optional. Don’t be a sheep. That’s how some of you fools sound.

Mickey Stines is the best sheriff we have ever had or ever will have. He runs it strictly by the book, and I will vote for him as long as he runs for sheriff. Thank you.

To a man in the Linefork community: You will never be the person either of your parents were. You were no good then and you are no good now. How do you feel now after what you’ve done? If it were up to me, I would track you down and wear the white out of you.

A fellow recently told me that he was part of the ‘Great Unvaxxed.’ I fail to see what is ‘great’ about being part of a group that encourages infections and potential deaths. So, maybe he meant ‘vast’ instead of ‘great.’ I’ll accept that at one time there were many anti-vaxxers, but that number is rapidly declining for two reasons. Some of them are wising up to the fact that the anti-vax leaders only care about their imagined ‘rights’ and don’t give a darn about the health of others. The other reason is that the hospitals are now full of unvaxxed knuckleheads, some of whom will beg for a vaccine, and some of whom will die. So, ‘vast’ is now diminishing. Let’s just call it as it is: this group is just half-vast misinformed cultists.

To these snake-handling people: They claim it says in the Bible that you shall take up serpents. They also say it shall not hurt you. Well, if you get bit and you go to the doctor, one, where was your faith? Two, you have to be out of the will of the Lord or it wouldn’t hurt you. You are doing something wrong.

The Trump Pandemic has now killed as many Americans as the 1918 influenza pandemic — and still counting. Trump and his master Vladimir Putin crack up every time they hear the updates.

A person who fools with little children is no man. He’s a deadbeat.

To the person who said he or she did not need my permission to reply to my comments: It’s not that you replied, it’s the slanderous, authoritative, and hateful way in which you replied. Why are you so hateful and unhappy? Are you not finding inner peace in your woke world? Read Matthew 11:23 and Matthew 11:29- 30. Try it, what do you have to lose?

Well, I read Speak Your Piece and I see where some smart aleck was talking about the road being built for ambulances and firetrucks for emergency use in Elk Creek. No, that road should have been repaired around the mountain and through into Carcassonne. The road they are maintaining is the road the strip job had dumped down in there. And the only reason it was put there and blacktopped was to get all those who lay back and don’t work out to get their checks at the first of the month. Trust me, I worked there for more than 20 years and know what’s back there — check-drawing Republicans always wanting a handout. Thank you.

It’s horrible that Robert Stivers would bald-face lie that Governor Beshear was singlehandedly being a tyrant by trying to keep more Kentuckians from dying of the Trump Pandemic. The truth is that Governor Beshear was following the advice of doctors, immunologists, and virologists in an effort to save lives. I don’t agree with Stivers that school boards have these kinds of experts, so he should be working for our citizens, not against them.

It’s a funny thing to me that coal is doing the best it has done here for the past five years. Who is president now? Good old Joe Biden, a Democrat. More trucks are hauling coal out of here than I’ve seen in years, and more trainloads of coal are going out, too. We have stepped up five engines here now pulling coal trains. The Republicans still think Trump is going to save the world. How stupid.

This message for Nana and Tron: If you do not meet me for a beer down at the bottom of the mountain, I think you both are sissies.

Now we will have to go through another lockdown because of ignorance. I have had COVID. It left me permanently disabled. I had the vaccine as soon as possible and now I am waiting for the booster. Which is more dangerous, the vaccine or COVID? Some people do fear the vaccine, but some people think they are so special God wouldn’t let them get it. Christians die the same as non-Christians. Attitude is the big reason — that person who says no one is going to tell me what to do, not parents, not authority, not doctors. The cemeteries are full these people.

The woman running the library is violating my First Amendment rights. If I want to talk and sing, I have an absolute right to selfexpression. I know the law.

To a certain person who accuses people of being informants for the law: You are the one who is an informant for the cops. Every time someone sells drugs for you, they get caught and you go scot-free. So how dare you call someone else an informant.

To the boy driving the white vehicle: You better watch selling your drugs, or your uncle will cut you off.

Since man wants to play God, why can’t man cross a chicken with an ostrich or something so we can afford the price of meat?

Once upon a time, Jenkins, Kentucky was a very beautiful place — a safe place where you could live and enjoy being outside and driving through town. But in these days, it’s a horrible story. We have a mayor and city council that need changed out. We have a junkyard on the Main Street of Jenkins. The properties in Jenkins have gone down because of our slumlords. Jenkins really needs the slate wiped clean. When it comes time to vote let’s think about these things.

Thanks again, Rod, you’ve got everything looking so pretty. All the bottoms look like people are getting ready to start a softball team or something. You’ve done an excellent job. Thanks again.

To the old lady going around Isom hollering for mouth deodorant : Bless your heart, they are called breath mints. P.S. Hoping that bent tooth of yours gets better.

Twenty years ago, a bunch of brave people sacrificed their lives to keep an airliner from attacking the United States Capitol. Last January 6, Republican terrorists finished that attack. This past Saturday, Republicans were rallying in Washington in support of the terrorist wing of their party. They obviously want us to know they have no shame.

To the caller who asked if we ‘wonder how many illegal Taliban the Democrats are going to slip in with the evacuees from Afghanistan so they can bring them here to murder American citizens?’: You are a treasonous lying stack of manure.