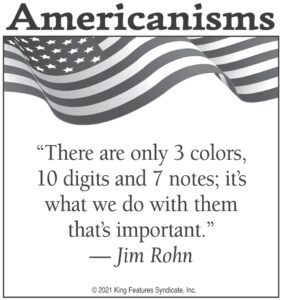 I don’t know who to direct this to, so I will put it here. While my family was visiting Letcher County for the Mountain Heritage Festival, my daughter and I rode up to one of the first Pine Mountain overlooks to enjoy the beautiful scenery over a picnic lunch we brought with us. When we pulled into the overlook we saw two picnic tables, but one had collapsed so we used the other one. While my daughter was sitting down at the table, she suffered a deep cut to her leg after sitting on a protruding nail she had not seen. I am reporting this because I hope the county officials or whoever is in charge will take care of this problem so that it doesn’t happen to someone else. Also, how did the tables start collapsing in such a short time?

The driver of the tandem truck hauling blacktop through Whitesburg — the license plate number is A78-492 — needs to have his driver’s license taken from him. He was doing 60 miles per hour past the old football field.

This drug epidemic we have in this county now is the worst it has ever been. How come our sheriff’s department and state police are afraid to do anything about it?

I see a certain little girl is at it again. Her mommy and daddy’s money bought her breast implants, $40,000, and a $5,000 set of lips. You can make anything out of rubber. Who does she think she is? I know what she was before she bought all of that, nothing but trash. It makes me sick to see people post pictures of themselves all dolled up after having all that surgery. It’s a disgrace. She needs to take care of her kids instead of letting everybody else take care of them.

I just wish people would drive down Bull Creek and see how a certain Republican lives. He gets out in the community talking bad about people for being ‘stinking Democrats’ when he and everyone around him draws every government handout coming and going. If what he gets aren’t handouts, I don’t know what is.

What kind of people fly a Trump banner thinking he is a really tough guy? Trump got on TV and talked some of the worst bull you’ve ever heard in your life trying to make people think he’s big and bad, stirred up the Capitol riot on January 6, and still has people following him. I have a housecat with a bigger set of cajones on him than Trump. They even had to put a diaper on Trump to keep him from messing his pants.

I would like to put this in the just wondering category. I know we have two chances, slim and none, of finding out how much military equipment was left over there and what the value of it was. I just wonder if Russia and China would like to get their hands on those Blackhawk helicopters so they can catch up to our technology.

I was in Whitesburg at Mountain Heritage Festival and walked by a lawyer’s office and saw the prettiest woman I have ever seen in my life. Just giving her a hats-off.

I think it’s a crying shame that this year’s Mountain Heritage Festival was not shown on our Letcher County Government Channel so that we who can no longer get out and attend could enjoy some of it. We really missed Mr. Robinson. He did a great job.

How and why can a president break the law and not be prosecuted? Look at the people under that bridge on the southwest border. Criminal.

Christmas will be here sooner than you think, and with the pandemic continuing that means a lot of goods won’t be available. I order a lot of stuff from a foreign country, and it’s taken anywhere between three-and-one-half to four weeks to ship back to the United States. So, whether it’s from a foreign country or the United States, you should think about ordering your Christmas gifts now or it might not be available in time. It’s something to think about.

Biden is trying to destroy America.

Dear Speak Your Piece: I would like to clarify something. The person who sold the heroin to the 15-year-old is not a kid himself. He’s in his fifties.

On Sundays, I hear that ‘WoodSongs Old Time Radio Hour.’ I like the music they have on there, but there’s something about that Johnathon guy that runs it I just don’t like. I wish they would change that fellow.

(Since the program was founded and continues to be operated by the host, Michael Johnathon, there’s probably little chance of any change coming soon.)

I lived much of my life on Kingscreek, and I don’t think that community needs a fire chief who is under criminal indictment. The county needs to find someone else to do that.

Well, I agree they do need that road that’s been talked about in Speak Your Piece for ambulances and emergency vehicles to get in there.

Well, the Democrats in Washington sure showed the world their stupidity again.

I told my friend the preacher’s wife that my little redneck missed two weeks of school but said he wasn’t behind, and that I asked him why and he said the whole class had been quarantined. She said those kids belong in school. Well, do they belong in school around the virus?

How ignorant is this world coming to be when people are dying because they belong to the Trump cult and won’t get the COVID-19 vaccine? This world is full of stupid.

I was reading in Speak Your Piece where someone said the Jenkins city council members and mayor need to be replaced. I agree. The members of the school board also need to be replaced, too. Yes, we need to clean house at both places.

Well, I see old Mitch McConnell is at it again. He doesn’t want to see the debt ceiling raised now that Biden is in office, but it didn’t bother him a bit when Trump was in there. I can’t believe the people of Kentucky have been stupid enough to vote for him for the last 35 years.

When you go to a grocery store and you see sale signs on this and that, do you really think you are getting a good buy? There is one store in Whitesburg that has sale signs up, but when you check your receipt you didn’t get the sale price. I have been gypped there twice and I won’t be back there again. Thank you.

Something needs to be done about this guy who beat the man in Jenkins. The judicial system needs to get this guy off the street. We are sick of people like that.

It’s amazing how Perry County and Pike County get all the jobs in eastern Kentucky, but Letcher County continues to get nothing.

Well, I’m driving around and still seeing all these big Trump flags flying. Why don’t you fly the American flag? This is directed at one who sits back and lives on his daddy’s hand-me-downs. He is too sorry to get and work.

I just wonder why the new phone books haven’t come out yet. They are usually here by this time of the year.

I was thinking about Mitch McConnell refusing to go along with members of his party who want to impeach Biden. He’s a shrewd politician. What he’s saying is just leave Biden alone and the Democrats will impeach him in another year.

As a taxpayer of Jenkins, I think it is ridiculous to have to drive up and down these roads going from side-to-side to dodge potholes and bushes. We have got to make a change in the next election.

In case you are not aware, our bridges are falling down, and most will not last much longer without being rebuilt. One of the biggest issues in D.C. is pork added to the backside of good legislation. Then there is a stalemate because someone takes the time to read the bill and they see the pork on the end and say no. I hope this helps you understand a little better. A health care bill is what you are referring to when you mention daycare and healthcare.

To the right-wing snowflake who spouted verses from the Bible my way because I call him or her out for being treasonous: I call it just like it is, little snowflake. What’s the matter, can’t you handle running into somebody that talks back? Better get used to it, because your kind doesn’t run the world any longer. And you can shove your religious sophistry where the sun doesn’t shine.