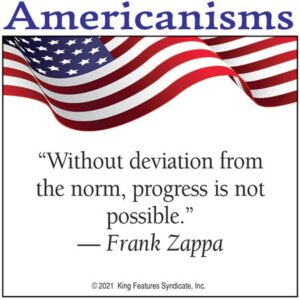 What it in the heck is this world coming down to? Ever since I was little, 50 something years ago, Halloween has always been on October 31. Why was Halloween changed to October 30? Don’t people realize that October 30 is devil’s night, a bad spirit night? Why the change? No matter the weather and/or the day of the week, Halloween has always been October 31. If that’s the case, we may as well move Christmas to September 11, the true day that Jesus was born.

To a certain ignorant person in Doty Creek who claims her neighbor works for the state police: Go ahead and prove it. It’s a lie, and you’re the one who is lying because you are a dope dealer.

It’s awful driving around my end of the county after the garbage is picked up. Every quarter mile they’ve compacted the trash in the truck right in front of someone’s house. You can tell because of the garbage juice and debris that dripped out is all across the road. Unless someone takes time to scrub it off it doesn’t wear away for several days That can’t be pleasant smelling for the people that live there. Shouldn’t there be some sort of drip pan under the truck that catches all that? It didn’t use to happen, but it’s every week now. It seems like something to remedy this problem would be a priority to the county.

Well, they did clear the bridge crew. I didn’t see any immigrants under it. The Bible speaks about us protecting our borders, and those men on horseback were helping us to protect our borders.

Now that the Trump Pandemic has killed over 700,000 Americans and still going even though his super spreader events are fewer, further between, and draw such smaller numbers of gullible people. Given that so many Republican leaders are still carrying it on should it be renamed the Republican Pandemic?

I notice a lot of crying about the roads in the county, like the one over there at Linefork. Well, you know what you got when you voted him in there. You should have known before you voted Republican what you were getting into. All Republicans are the same, just like what is going on with Mitch McConnell and his followers in Washington right now. They don’t want to pass any law that would help the working people and poor people, but when Trump was in office they would pass anything as long as it benefitted them.

They say there is a burning ban in Letcher County. If so, then how is a certain person getting by with burning garbage and junk in Doty Creek right now?

What’s with the big garbage dump in that yard on Adams’s Branch?

A congressman said that in this big deal they are trying to pass in Washington that they are going to tax cattle at $2,300 a head. That would put the ranchers completely out of business, and we would never have any more beef to eat.

(The good news for us beefeaters is there is no truth to the falsehood U.S. Rep. Markwayne Mullin of Oklahoma tried to pass as the truth. The nonpartisan organization Taxpayers for Common Sense, a federal budget watchdog group, says the legislation now being debated ‘does not include an ‘animal agriculture tax’ of any amount, let alone $2,600 per head of cattle.’)

I have been blessed to have had so many wonderful people in my life — people who make me smile and make my day better because they are part of it. This is dedicated to those people who bring us happiness and ask nothing in return.

Just calling in today not to complain, but just saying it takes all kinds of people to make a world. I am one of them and I am just glad to be alive. Thank God for today.

Are all Democrats liars, or are all liars just Democrats?

At least 88% of Democrats have been vaccinated compared to 55% of Republicans. Let that sink in.

This is to the person who called me a right-wing snowflake: It is better to be a snowflake spouting Bible verses than an idiot spouting slanderous, hateful lies. Now, it would be wise for you to learn about a person in government prophesied in Isaiah Chapter 9.

Our mayor in Jenkins was wondering where all the people have gone. If he would drive up and down the road and count all the vacant lots, he would realize why people aren’t here. If he would enforce some of these ordinances, like those regulating dogs, horses, cows, and goats, people would be interested in living in this town. Thank you.

The grass at Thornton Cemetery is so high it looks bad. I wonder if the jail inmates could mow it. I know everybody would sure appreciate. A lot of the people buried there have no living family members.

Speaking of Congress wanting to raise the debt ceiling, only 13 to 14 percent of the revenue going in to Washington goes to pay on the national debt.

A message to the Colly Creek rip: You are supposed to go out and have dinner and enjoy yourself, not go to motels and hook up and go right back home. When are you going to start selling videos?

When I try to call the sheriff ’s office to try to report a crime they won’t pick the phone up and answer it. They just sit there and let the phone ring while criminals are out here breaking the law and getting by with it. The same thing happened when Danny Webb was in office. When is it ever going to come to a stop?

The head of Homeland Security said the government doesn’t have the authority to require immigrants to take the vaccine or to wear masks. We the citizens of this country are the government. Why would we have less rights than the immigrants who come here?

Can someone please tell me the phone number to call the corporate offices of the owner of Mountain Breeze Apartments? Thank you.

Yet another story straight out of the Jenkins Comics. The latest is a Jenkins guy walking around in his underwear at a convenience store and having a big old time. Get on the ball, Jenkins police.

We need an alternate Republican Party. Under Mitch McConnell’s leadership, Senate Republicans are trying their best to block — and usually succeeding — any legislation that doesn’t favor the wealthy and big multinational corporations. That includes protecting the loopholes that let them pay almost nothing in taxes. It also includes not passing legislation that would return the post office to its once-efficient self-sustaining model. Yes, we need a new party.

I would like to know where to sign up for free water and cable like some of the people have on Cleo Loop. Please let me know if you know how to do this.

Well, well. Jenkins has canceled the remainder of its football games and folded up the team. This is getting to be the same thing year after year. Why not schedule two games only? The way I see it, you failed again.

Could someone please tell me why a note was put on the doors at Mountain Breeze Apartments saying there would be a filter change, yet it’s been four months and we will haven’t gotten a new filter? Thank you.

As a taxpayer of Jenkins, I would really like to see our schools’ test scores posted in the paper. Thank you.

No, I’m not going ginseng digging. I am looking for ginseng diggers. The number to call is 911.

I know there are smart people here in Letcher County, so I wish someone would tell me why banks go ahead and process your outstanding checks when you don’t have the necessary amount of money in your account, and they know your Social Security check will be deposited the next day. Thirty-four dollars for each check adds up to a lot over the course of a year. They did it to me four times in one day.

What kind of county do we have now? Look at Pike County and Perry County, they are always building up stronger and better. Nobody in government in Letcher County cares about our county. It is a disgrace.

. Just think of all the diseases Democrats are bringing across our southwestern border just to try to get power over the state of Texas and the United States.

I have two suggestions for these liberal Democrats, and both of them are to stay the hell out of West Virginia. Joe Manchin is going to get re-elected when the rest of you are going to be gone. I dare any of you to go into West Virginia and campaign against him.

A certain woman goes to prison for molesting a boy and The Mountain Eagle refuses to print it because of who her family is. This, folks, is all you need to about why Whitesburg is so corrupt. Even the local paper protects child molesters just so they can score Brownie points with the bigwigs. Cowardice newspaper. No guts, no morals, no integrity.

People better watch out. Members of our judicial system do nothing to stop family members from forgery while people are on their deathbeds. What happened to being for the people and upholding the law?

Psalm 9:17, the wicked shall be turned into hell, and all the nations that forget God. America’s leaders have rejected the laws of God and now our nation is reaping what it has sown. America has rejected the laws of God. The definition of sin is the transgression of the law of God. When you break God’s laws then there are consequences. Sin will take you to hell. The Bible says the wages of sin is death. How many Americans are going to die before our stubborn and stiff-necked leaders in our government will admit they don’t have the answers and repent and tell the people to repent and turn from their evil ways and ask God to save them?