E-m@il address
In addition to the telephone and the U.S. Mail, The Mountain Eagle accepts comments to Speak Your Piece by electronic mail. Our address is: mtneagle@bellsouth.net 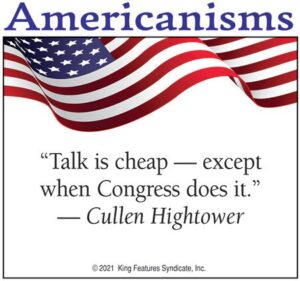 My children attend Letcher County Central High School, where they participate in the JROTC program. The school board denied them a field trip to attend the Battle of Leatherwood because they could be exposed to COVID-19. I take COVID very seriously. However, I feel what rules apply to the JROTC students should apply to all students in other extracurricular activities. The football team was permitted to go and stay overnight after a football game. Would the other team’s students not be exposing our football team to COVID? Tackling? Touching the same ball? What am I missing here? What about the Mountain Heritage Festival? How many students attended that after school and then went to school that week? I just feel that the JROTC kids get the short end of the stick because they are not the football team. You have the volleyball team smacking a ball around that everyone on the gym floor is touching. Are they not at risk of catching COVID? What about the bathroom doors at school? Also, the gifted and talented students were at Portal 31 in Lynch on a field trip. Is COVID not in Lynch? I don’t see why this group of JROTC students couldn’t have been approved for this trip and given instructions to wear their masks as they do each day at school and at each football game when they stand for two hours directing traffic for most home football games. Do better, Superintendent Yonts.

To the beautiful woman who says she is 43: I would like to see you again. Walk or just talk. I’m there every day at 10.

In the last edition of Speak Your Piece, I shot my mouth off about Sheriff Mickey Stines, his deputies, and his secretaries: I am sorry for that, Mickey. I really am. You did come to my house when you were running for sheriff, and you said you would take care of the problem in my neighborhood. Well, you took care of half of it, but the other half is still around. You know who this is, Mickey, and you have a personal invite to come to my house and see me.

I remember when every shop along Main Street in Whitesburg had awnings out in front. Sure would have been nice during recent rains.

T and T: Been in the region recently, and thought I’d use the local means of communication. I’ve been thinking about irrational thinking, but too rationally, I think. Don’t let the haters get you down. Max.

I just want to say that Mountain Mayhem, the haunted house in Whitesburg, was awesome yet again. This year they went above and beyond. The first four rooms scared the you-know-what out of me and my family. We are going to come back for Halloween night. You rock, Mountain Mayhem.

So, the United States was surprised by the Chinese missile being fired? What about Russia? They have a supersonic missile that will go Mach 27, which is over 20,000 miles an hour. Now, put nuclear warheads on these bad boys and what is America going to do about it. Scary to think about, isn’t it? What about our children? We need something to swat these out of the skies with.

I think Obama’s third term of presidency is more stupid than his first terms were.

I feel sorry for the people of Doty Creek who voted for public officials to do something about the drug dealing that goes on there. Every Friday and Saturday night there is a lot of traffic in both neighborhoods.

I think it’s a shame the way people set these cats and dogs out beside the roads. I thought there was an ambulance shelter in this county.

Could anyone tell me why a Letcher Fire & Rescue ambulance crossed into Virginia and turned up South Fork? Are our funds being spent in Virginia? If so, we need to have a long talk with our rescue members. Thank you.

I want you people to read the twelfth and thirteenth chapter of Revelations, at least down to 13:5. That man gets his power from Satan. The only thing you can do is get on the side of the true God. It’s going to get a whole lot worse, people. You have a nice day.

I wanted to say that I’ve noticed that a local group of Internet radio hosts have finally turned away from the false path of science. I pray to Jesus every day for their souls, and I have been glad to hear that they are making steps toward the path of righteousness. Thank you and God bless.

Negotiations are continuing on the final framework of President Biden’s package, but among the initiatives to be cut are free community college for everyone; free dental, hearing and vision coverage from Medicare; and a new system of penalties for the worst polluters. If you voted Republican you can take credit for helping to make sure our country won’t have these benefits.

To the caller who said he or she would go to West Virginia anytime, they want: Go ahead and make my day. And just for the record, I voted against Trump both times. Thank you.

As much money as the people of Jenkins pay in school taxes, I think it is ridiculous that we cannot hire teachers who are more qualified to teach our children.

They sure need to give these county workers a $2,000 bonus. The way these ditches in this county are full of garbage, it looks like the workers do nothing but sit on their behinds. The county better take that money and hire someone who will work — someone who really knows what work is and will clean out these ditches. This county is in the worst shape it has ever been in. I have never seen the litter problem as bad as it is now. What is wrong with our county officials?

To the caller who said we need to thank President Biden ‘for these high gas prices and high food prices’: President Biden has no authority to ‘let’ these prices go up or force them to stay down, and you know it, you lying stack of manure. If he did, you would be whining about ‘overreach.’

It’s a shame what they did to the road as you go out toward the Rec Center and where Dairy Queen used to be. Taxpayers had to pay for that road and then they just let people destroy it.

The old Whitesburg High School would make a nice place for a rehab center or a place for the homeless.

(The former Whitesburg High School campus was purchased several years ago by Mountain Comprehensive Health Corporation. MCHC is currently in the process of turning the old English Building portion of the campus into 22 efficiency apartments for men recovering from drug addiction.)

To a certain lady in the Mayking area: I came up to your house one day and, lo and behold, the door was open, but the screen door was shut. What I saw with my eyes didn’t look like family stuff was going on.

How can I vote Republican anymore when they are so afraid of and beholden to Trump that they won’t even vote for an infrastructure bill that attacks our climate crisis during this time of destructive droughts and hurricanes? How can Republicans vote against regulating the dark money the big corporations use to buy Congress? I am sick of this.

It’s a shame you can’t go to the Rec Center without the senior citizens blocking the way out. They need to do something about this or put a stop to the dinners.

Yes, I know the Bible says to bring in all the tithes to the storehouse. But it also says that there may be meat in my house. Do we still offer animal sacrifices? The lying false prophets who take people’s money should be ashamed of themselves. May God deal you a double portion of His wrath.

On Monday of this week, my three-year-old grandson said, ‘Papaw, you can’t tax the rich or the corporations, they run this country. They will raise the price of their products and wages won’t go up. The money comes out of the working public’s pocket again.’ Wake up, you woke people.

To the person complaining about the ‘ignorant country’ we live in: It would raise the United States of America’s IQ level enormously if you and the rest of the Trump-loving scoundrels would pack up and leave.

Remember when America was great? Would you like to see America great again? We were the greatest nation on Earth, but now all the other nations look down on us. They see us as a pitiful nation that has been broken by the dogs in the White House that sold out the American people and put our service personnel in danger and left them behind. Americans were left in Afghanistan to be slaughtered by the Taliban. At one time our nation was revered and respected by all nations, but now America is falling because we have lowlife cowards trying to run a nation by trying to appease our enemies instead of taking authority and taking care of our own people and stopping the enemy.