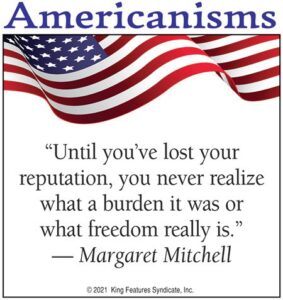 Has everyone noticed the fantastic cement pond with the diving board in downtown Neon? All summer it was open for all to see. I got excited thinking it was a city pool. But then the white privacy fence went up around part of it at the end of the summer, just after the LED lights were installed and the flamingos disappeared (I’m assuming they flew south for the winter). Now I’m left with questions. Will it be turned into a ice skating rink in the winter? Will the flamingos be back with Santa hats? Maybe the white fence will have “Merry Christmas” on a neon sign hung on it? Will someone be selling Swiss Miss hot chocolate and popcorn to the public who come to ice skate to help finance the rest of the white privacy fence around it before next summer? We all need answers!

Last week someone wrote in suggesting that we all read some information in Revelations, and citing specific verses. I read that, and then some and have found that I need more information. The writer specifically says, “He gets his powers from Satan”. Who is “he”? I need to know who to avoid. My guesses are the following: Mitch McConnell, Donald Trump, Joe Biden, the guy who wears all black that walks with his back to the traffic in Neon who I’ve almost hit 3 times, or possibly the guy I know who beats his wife? Am I close at all?

I have been to Grace Closet many times before and most everyone knows me, except for one certain worker who proceeded to snub me and take on an air of superiority as she was explaining how lucky I would be to purchase a ‘designer’ handbag they have there. Unbeknownst to her, I am no stranger to designer bags, shoes, gowns, or anything else. And I personally just simply don’t care. Trends are here today and gone or dead tomorrow. The issue I have is this: People in our area, given the economic difficulties most face, could probably not give two tinkers damns about what kind of bargain they think we are getting, especially at the cost of being snubbed and condescended to. Grace Closet in its inception was created to help the individuals of this area, not humiliate or harm. I did love going in there (there are a few workers in there that I still love seeing), but I choose to not patronize their establishment again in the future. Having owned-managed and worked retail on many levels, I would advise them to quickly re-evaluate their approach concerning this stance. But that, of course, is just my opinion.

I work in a different state that makes these ungodly rules and mandates that are forcing people to get this COVID-19 vaccine in our bodies. I believe some employers forget that asking if their employees have gotten the vaccine yet is none of their business and is a direct violation of not only the HIPAA law, but also a direct violation of people’s constitutional rights. People have a right to their own medical decisions and health. It is time to walk in the spirit and not the flesh, people. And to all you employers asking people if they have had the vaccine, just stop. it’s against your employees’ constitutional rights. End of story.

This is Mr. Bill Whitaker. I just wanted to respond to Jeanette Tacket’s nice pieces she wrote about me in the paper. Back when I came to Colson, I knew I wanted to give my students a high quality of learning and to teach them about good character. I was there 19 years and I really enjoyed teaching the students, coaching them in volleyball, driving them on the school bus, and just being with them. Most of my students were really good to me. They were always nice and polite. I thought of them as my own children and treated them how I would treat my own sons and daughters. My students made my teaching career a joyful one, and I would like to thank them for that.

If you think it’s outrageous for a liberal like Alec Baldwin to accidentally shoot someone on a movie set but are perfectly all right with someone gunning down a class full of first graders, you might be a Republican.

To the caller who said his three-year-old grandson said, ‘Papaw, you can’t tax the rich or the corporations, they run this country. They will raise the price of their products and wages won’t go up. The money comes out of the working public’s pocket again’: I can understand a three-year-old being too ignorant to know better than to roll over and play dead for the rich. But for his grandfather to not only be just as ignorant, but to lie and put the words in his three-year-old grandson’s mouth? You’re a real piece of work, Papaw. Hope your grandson figures you out real early on.

I see where there are over a hundred freight ships out in Long Beach, California, waiting to be unloaded. All of that product is coming from overseas, China mostly, and that tells you where our economy is — over there. All of our stores are full of goods made in China. They will eventually take this country over, and they don’t need a military to do it. They will take it over with technology.

I would like to thank the people who put up the Halloween decorations across from the Ermine Double- Kwik. My little grandson so appreciates that, and I do, too. Thank you very much.

(Nice comment. They do go above and beyond, don’t they?)

Somebody needs to throw a monkey wrench into Iran’s nuclear dealings. And what about our southern border? A lot going on needs to be changed, and it will be changed, won’t it? I’ll tell you this is a Christian nation. Nobody is going to assimilate when they come here.

I would like to know when they are going to bring ‘The Swap Shop’ back onto the Whitesburg radio station. We sure need it. If we could sell a few things, it sure would help us. Please bring back ‘The Swap Shop.’

To a fellow who has about six or seven people working with him all the time: How do these fellows get paid and what are they working for? I have a good idea of what’s going on, and I think the whole community does too.

This is responding to the person who called in about the Letcher ambulance being seen in Virginia: I don’t think you understand how things really work. We are not funded by the taxpayers at Letcher EMS. We are funded by grants and Medicaid and Medicare. Therefore, the ambulances can go to Virginia and do a transport for insurance companies on private contracts. There are always one or two ambulances available in lower Letcher County for emergency services at all times.

Please, Jim Ward, run again for county judge/ executive. This county has gone to pot since you left office. The garbage is running over, and the current administration won’t do anything to get it picked up. We have no laws. Jim, please run for county judge again. We sure do need you.

I think justice needs to be done at Letcher Elementary School. I am just thankful the little boy is okay.

I heard from a friend who called a place that said they had a job opening at $22 an hour, but they offered him $9.50 an hour for 25 hours a week. But he had to be available seven days a week. They talk about all these job openings, but they are for part-time jobs because they don’t want to pay fulltime wages. The businesses blame the people for not working, but what they want people to do is work for song and a dance.

They say shortages are driving up prices. Well, there is no shortage of Pepsi but the prices for it have gone sky-high. It’s because they are profit gouging.

I was just going to let people know that if you want any drugs, just come on down to KY 588. You can also go up Smoot Creek. She will sell you anything you want.

Whitesburg Middle School has the worst principal in the county, as does West Whitesburg Elementary. It is rude for a parent such as myself to see a principal spending time talking on the phone during open house.

I think we need to bring back the hanging of socialists. In Vietnam, we put a hole between their eyes.

Being someone who likes nostalgia, I often wonder about all the little stores that used to be in the mountains and gave credit lines to individuals. I miss that. I know a lot of people say time moves on, but Dollar Tree, Family Dollar, etc., aren’t going to give you a line of credit. I’m not against the dollar stores, but it has to stop.

Back when I was a child the polio pandemic came through. They developed a vaccine for it and we all eagerly took it. But only about 98 percent of us survived it. Sounds pretty good to me.

I just want to say I really appreciate the Atlanta Braves for all the hard work they have done and how far they have come. Not since the days of Tom Glavine and Mark Lemke have we seen such a great baseball team finally get the recognition they deserve by going to the World Series.