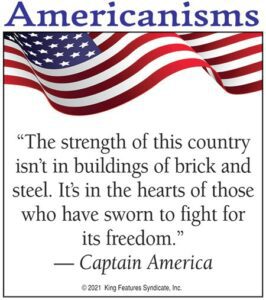 Let me get this straight. You have a drug dealer living right next door to you, carrying on business every day, and you have a trailer about a quarter-mile above you doing drug business and prostitution to boot, and you’re going to be running for office again? That’s going to be a big pass on my vote until you get your own neighborhood cleaned up, buddy. Do your job and I’ll vote for you every time. Sit on your front porch in your uniform for your morning coffee, park your official vehicle out front and see if that might slow them down even a little.

Yes, I would like to say that we don’t have any police in Letcher County after four o’clock in the evenings. All we can get are the state police from Hazard, which means that by the time they are dispatched here it is all over and done with.

Would somebody please tell that hypocrite president of ours that there are 50 states in the United States. On Monday, November 1, he said there were 49.

We just passed having 10,000 Kentuckians die of COVID. Putin must be so pleased with his useful dolt ‘tRump’ and the Republican governors who are still spreading infection. How many more must die before ‘tRump’ gets his Moscow hotel?

Is it fair to put all the blame on Senator Manchin for blocking the protection of our environment when every single Republican senator is also committed to leaving our precious children a planet that’s worse off?

Have you noticed that everything is shrinking in this world? I bought some Lance crackers and see they have shrunk them again. What’s going on with this? Even Vienna sausages have shrunk. Everything I buy has shrunk. I’ve been loyal to Lance crackers for a long time, but you can just take so much. God bless America.

I just read in Speak Your Piece where someone was asking Jim Ward to run for county judge again. Why would anyone want him back in there? Yes, vote him back in and it will be just like the Biden administration. Have people forgotten that under his administration the county did away with the senior citizens program?

I live over here in Linefork at Turkey Creek. They just came in here and cut the weeds with a tractor with a boom on it. I don’t know what the guy was doing, cutting weeds or cutting the blacktop. This is not a complaint against our county judge and magistrates, who are doing a wonderful job, but the operator on the other hand needs to decide if he’s going to cut the blacktop or cut the weeds. The county also had to send the mechanic over to work on the tractor three times.

I see the county’s garbage trucks running up and down the road overloaded with garbage. They are leaving garbage everywhere and they never go back and pick it up.

(Are you sure you had a connection with the Speak Your Piece recorder when you phoned in your comment? We checked twice and could not find your comment anywhere. Feel free to resubmit comment.)

I live 65 miles from a newspaper, and it takes five to 10 days for my newspaper to get here. When I was young you could get a letter from Ohio in three days. Call Mitch McConnell and Hal Rogers and tell them you want the mail service fixed. Tell them to fix the mail service the Republicans screwed up in no time.

Letcher County has made some bad choices in our elected officials over the last few years. We have made bad choices in our county judge’s race, our magistrates’ races, our governor’s race, and our state representative’s race. We have hired people who do nothing in terms of helping Letcher County whatsoever. We have an opportunity coming up shortly to hire new people. We definitely need a new county judge, but we certainly don’t need Jim Ward back in office again. We need from fresh people with fresh ideas. We need a new state representative — one who represents the people and not one who writes stories in The Mountain Eagle. We need somebody like that. We need someone who helps get roads and jobs.

(The Commonwealth of Kentucky has 100 elected state representatives, and each one reports on legislative issues to his or her constituents through occasional columns in their hometown newspaper. Please tell us why you think that is wrong.)

To the person who said it a violation of an employee’s constitutional rights when an employer asks people if they have had the vaccine: Your rights end where the rights of others begin. You go sticking your infected face into someone else’s, you’re liable to get it shot off.

I’m not naming names of garages, but I am going to say that sloppy work and getting too big too fast will come back to bite you in the behind. When you sell somebody something you need to make sure that person gets what they paid for. If it tears their car up, are you going to fix it? Well, I can answer that for you. No, you won’t. So sloppy work is going to break you.

It sounds like the first three long comments in the November 3 issue of Speak Your Piece were written by the same unhappy person who enjoys criticizing others. Look for the good in people and you will be a much happier person.

To the person who asked why the City of Jenkins won’t remove all of those cars parked on the street: Our mayor doesn’t care. He’s like Joe Biden — you can’t choke the truth out of him. He’s just like what Trump said about Ted Cruz.

To the person who recognized my writing about the Scriptures and asked about Donald Trump: You got it right. I am very impressed that you got that. Donald Trump and Joe Biden are the men. Donald Trump will make a comeback. Read Revelations 13:12.

I just want to thank my sister, Olivia, for being my guardian angel. You have helped me so much these past couple of months. I love you, Sis.

Does anyone know if a Jenkins school official is going to be under investigation for his behavior over a fight that happened at Jenkins when he was so rude to the students and the staff? Just wanted to know.

People had better start checking their rental property. If you have a renter with dogs, they are tearing your property all to pieces.

I want to congratulate Worley and Joyce and Eddie and Michelle at Stop ’n Go at Deane. I think they are the most wonderful people, and they are the best people. I love them and I hope the best for them. And Michelle is the smart one.

I see where Deputy Fife from Smoot Creek is running for constable again. I wouldn’t vote for him for dogcatcher, let alone the position he now holds. Thank you, old pal.

I would just like to know why a restaurant in Jenkins can’t get their orders right. Four out of five visits through the drive-thru you get the wrong order. It would seem to me that if they are looking at it, they would be able to get it right. Before you lose your business, you need to get the orders correct. Thank you.

Biden stuck his finger in the American people’s face and said if you lost your child, you should have compensation. People threw those children across the fence.

Well, it’s clear now that Joe Biden is starting to pay his Chinese counterparts that gave all that money to him and his son. His destruction of America is well underway. Not only did he turn off the oil spigot from up North, now he wants to shut down the diesel fuel and freeze the East Coast to death. He is going to have everybody starving by spring. When will the Army wake up?

Certain people who are charged with a sex-related crime go to jail and stay in jail. So why is a certain gentleman not in jail when he’s been charged not only once, but twice? Does he have some kind of paperwork that allows him to get away with any crime he is charged with? I think it’s high time something gets done about this gentleman.

It’s a dirty shame that law enforcement in Letcher County doesn’t care about the drug dealing going on across Pine Mountain. I wish they did.

To the person who said we are a Christian nation: No matter what you say, this is a secular nation where freedom of religion applies to everyone. If you don’t like that, you can get out and we’ll replace you with people who believed more in America’s values before they even came here than people like you do.

Well inflation has hit the Harlan County Man — gas, food, auto, you name it. It’s getting bad, real bad. Biden’s collapsing economy threatens all Americans. Biden’s war on energy worsens every day. He also lies about our great President Trump. You Democrats suck and you are fools for voting for Communist Biden. Trump 2020. God bless America. The Harlan County Man. Do your job and print this.

If our nation’s leaders want the coronavirus to stop then what Biden needs to do is to tell our nation to repent and turn from their wicked ways and ask the true and living God that created the heavens and the Earth to have mercy on our nation and forgive our sins, ask Jesus to forgive our nation of all the murder of innocent children, forgive all the adultery and fornication and ungodliness and all the ungodly laws that America’s leaders have put in place, and truly repent and turn from all these evil practices, humble before the mighty God that has the power to stop these pestilences. But if America does not repent it will get worse.