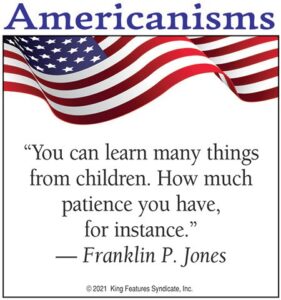 It is okay to be outspoken if you have something intelligent to say. Someone needs to relay that to U.S. Representatives Marjorie Taylor Green from Georgia and Lauren Boebert from Colorado. I’ll bet the voters in their home states are wondering, ‘what the hell have we sent to Washington to represent us?’

A quote for the antivaxxers out there: ‘The idea that we can enjoy the benefits of society while owing nothing in return is literally infantile. Only children owe nothing.’ — Sebastian Junger

To the person who told us to ‘burn more coal and burn plenty of it’ and ‘get ready to meet God’; I would call you a brainwashed imbecile, but the fact is you’re just another bought-and-paid for, lying stack of manure.

To Mike: I can’t believe you would vote for (a certain county official). He’s a fraud. If only you knew the things I knew. — Anonymous

Associated Press headline from February 2, 2018: ‘U.S. Employers Added a ‘Robust’ 200,000 Jobs in January.’ Associated Press headline from December 3, 2021: ‘U.S. Employers Added a ‘Sluggish’ 210,000 jobs in November.’ How were 200,000 jobs added in a month Trump was president ‘robust,’ but 210,000 jobs added in a month Biden was president ‘sluggish’? If you think big media isn’t against Joe Biden, you haven’t been paying attention. The TV talking heads are treating Biden just as bad as they did Trump.

Well, we see where they had a drug raid at Woodrock and made some arrests. There are more drug dealers down there, too, and they should also check out Blair Branch and Doty Creek while they’re at it.

There are four people on my ‘no-no’ list who aren’t getting a Christmas card this year. Two live in Blair Branch and two in Woodrock. All four of them told a lie on me when I tried to buy something from the man who used to be the magistrate of District Four. I don’t want to have anything to do with you all anymore. Church people shouldn’t lie like you do.

To a certain person: Quit trying to hide. You are caught. Come and face me. You know you’re going to have to. It’s just a matter of time, sweetheart.

If you’re like me you are sick and tired of hearing about the shootings and killings in our schools. Who is protecting our children? Where is the security? It’s not the children’s fault they are getting killed in these schools, it’s the fault of the parents and security. It makes me mad to think a child gets up in the morning to go to school and gets wasted. Look at the children who had to witness this. They are traumatized. They have never seen this type of violence before. What is wrong with people?

Honey, you go on flipping those burgers. At least you are making an honest living. What goes around comes around. You are 10 times the woman that woman will ever be.

I’ve been to fiscal court meetings, and I know that Winston Meade gives excess fees back to the county. I don’t think anyone else would do that. Thank you.

Some kids fail with classwork while others get everything given to them. If you play one certain sport the coach says, ‘Don’t worry about your grades; they will be given to you. And don’t even show up for school if you don’t want to. Just make sure you come to practice and all games.’ This is awful. Thanks, board members.

To the lady at Deane: Why are you upset? I know what it is. I’m in winking distance, hint-hint. And you know I have a four-wheel drive. We could ride off Beaver Gap. I love you. Bye.

I’m wondering if it inconveniences anyone else in the Neon area that the bank here has no ATM. Does any other bank in the United States not have an ATM?

To a certain lady in Goose Creek: You are living in someone else’s house, not paying your rent half the time, and you want to yell, ‘I’ve got kids and we grew up together’? Well, honey, it’s time to get out. He’s homeless now because you won’t leave. You can either leave or the law will put you out. God bless you.

Could the magistrate in District 1 ask MCHC or someone to put in a drug rehab center between the Oven Fork side of Pine Mountain and Cumberland? Thank you.

To the girl driving the red Chevrolet: If you follow me once more, I promise you I will wreck you. Now stay off my back. I don’t want anything to do with you. Stay away from me.

America has been going in the wrong direction for a long time. America’s leaders have forsaken the laws of God and have brought a reproach on our nation. America’s leaders have had no regard for the laws of God, and they think they are getting by, but God is keeping a record, and America’s reaping what it has sown. God created this Earth and He will destroy it. There is a hell whether you believe in it or not. Hell is still real and real people go there. America is suffering the consequences of rejecting God’s laws.

To all of you who are following me: Why don’t you just stop so we can have a little talk? Are you brave enough?

I see the news has come out that Jason Back has left the county government. Another Republican on the run. God forgive if this was someone like Jim Ward had quit, as all they would do is trash him.

Folks, it’s time to face the truth. Coal is booming right now and who is in the office of President of the United States? A good Democrat. Who was in office last year at this time? The big Trump and his Trump Train. What did he haul on his train? It must have been a bunch of scumbags because it sure wasn’t coal. Coal is now the best it’s been in many years, but when it comes to election all the Republicans can do is talk about abortion and try to scare you into believing their lies that the Democrats want to do away with all coal and take your guns. If a Republican was in office right now and coal was doing as well as it is they would be up on the rooftops bragging about it.

I have two words for you and a short message after that. The two words are Roll Tide. The message is Bryce Young just won the Heisman Trophy by beating Georgia. Alabama will stomp a mudhole in Cincinnati and then turn around and stomp it dry.

To a certain person: Did you call my sister? What good is that going to do for you?

Certain people are getting ready to get their hands caught in the cookie jar and smacked too. There is stuff going on that shouldn’t be going on.

Folks, our president is a communist, not a Democrat. The things he wants done prove it — first destroy America and then make it communist. If you think China will ever attack us you are a fool.

Last year when COVID was at its worse a friend of mine told her boss she needed to work from home because she was afraid of getting the virus and was at high risk because of her age. Then she would go the convenience store and eat a sausage and biscuit sandwich without a mask. She said COVID was just like a cold or mild case of the flu while she was out but would stay home because she claimed she was at high risk of getting sick. There is a lot of hypocrisy about the virus.

This time of the year always takes me back to Roxana and going into Amburgey’s Grocery.

I think it’s a shame a family member who has two children she never keeps gets on Facebook and posts pictures of her man taking her out to see the Christmas lights. She sponges off her parents, but the parents take up for her and can’t understand why the other kids are mad at them. Get real. Wake up. See what you are doing.

I enjoyed reading all the good comments about The Mountain Eagle, but the one that really got my attention was the story about Ms. Jessie Etter. That impressed me so much that I cut it out and put in my family tree trunk. It was beautiful. And The Mountain Eagle is a good paper to read, plus it gives us Speak Your Piece.