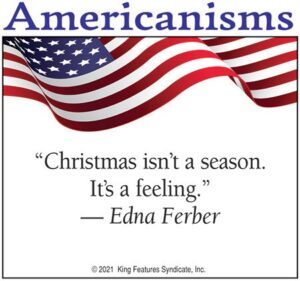 I see what you mean about the bridge on Route 7 at Sackett Loop. That is some fancy infrastructure. Here’s the deal; you don’t get on the bridge when there is ice or snow with all the dips and curves. You don’t see that one in The Mountain Eagle. Does it pass inspection or not?

People, don’t stay on Facebook until you lose all the brains you have. There is a life outside of Facebook.

To a certain lady: You claim to be Christian, and so does your husband. You two are in separate houses. I would like to know how you are drawing food stamps when you don’t even live together. I believe that’s called a lie, which is no good. So, rule out being Christians.

My family and I drove around looking at some of the Christmas lights in Whitesburg, Isom, Jenkins, and Neon. I will have to say there are some pretty awesome lights out there. The ones at Fishpond Lake are beautiful. But I’ll also have to say that up in Jenkins, in behind the old high school up on the hill (I don’t know the name of the street), there are two houses with some really beautiful lights up. Whoever those people are, they did an awesome job. Thank you very much.

I’m watching CNN this evening about nothing but January 6 and Donald Trump. Is Joe Biden that boring? If Donald Trump has been out of office for nearly 11 months and he’s still the top news story, that doesn’t say much for Joe Biden at all.

I believe our liar-in-chief scared the bejesus out of Putin.

Twenty-eight years ago, President Clinton proposed a national healthcare program. Just think how many hundreds of thousands of American lives could have been saved during the ‘tRump Pandemic’ had the Republicans not killed it.

The Subway restaurant is really good. They put something on their foot-longs when you order one.

If I were a Christian, I sure wouldn’t sit around gossiping all the time, especially if I didn’t even know what I was gossiping about.

I would like to know what Grandma was doing in Woodrock, getting caught with all the meth. I saw that and laughed until I lost my breath.

To a certain person: Who is hiding from you? Maybe they don’t want to look at your toxic self, sweetheart.

. Where have the Republicans with class like Bob Dole gone? There’s only a handful of them left.

People need to keep an eye out for a small blue pickup and a gray four door car going in and out of Cram Creek. They are wheeling and dealing, without a doubt.

In response to your editorial about infrastructure projects and the tunnel through Pine Mountain, unless the leading businesspeople contact the state transportation department in Pikeville and voice their support for that project it will never get done. It would open up the Harlan-to- Pikeville corridor and open up 50 jobs for the people of Letcher County and bring in tourists since it would be the third-largest tunnel in America; without the support of Whitesburg’s business owners it will never get done in a hundred years. If you want jobs, call the Kentucky Department of Transportation in Pikeville and voice your support for the tunnel through Pine Mountain.

Tornado Alley has moved almost 200 miles eastward due to global warming. And it will keep coming. I wish Republican legislators representing states in its path, like Kentucky, cared about this.

Listen up. I appreciate that you all have quit following me and I thank you. Let’s just keep it that way.

When did the Letcher County Recreation Center become a place to sell old junky jewelry? Can anybody go down there and sell anything they want? I thought it was a rec center, not a business.

How much garbage is piled up with nothing but facemasks through this crisis? What is wrong with America? Aren’t we smart enough to invent a lightbulb to put inside of buildings that kills viruses and insects? Somebody knows how to invent this. I don’t, but somebody does. God bless America.

The mainstream media would love to be the judge and jury on a lot of these trials. Thank goodness they are not, because they have been wrong about every one of them so far. So, the justice system still works. Someone needs to tell that to the mainstream media.

I was down at the walking track fixing to do a couple of laps when I saw a fellow in a fancy suit and nice truck. Sir, I would like to ask you something. I thought you were married, but not to the blonde who was with you.

A big shoutout to Jason Isbell, one of the best musicians in the world today, for donating a large portion of the proceeds from his Pikeville concert on Sunday to help the Kentucky tornado victims and their families. What a classy thing to do.

To certain men from Loves Branch who are using a certain woman: You know who you are, and you know what you are. Shame, shame, shame. You will get nothing for Christmas.

To the point: Just so you know, I have video of what goes on in my house. When I am allowed to get my things, this video will end.

Last night I found a new wrestling show to watch. It’s called AEW — American Entertainment Wrestling. It is on TNT and it’s 10 times better than the AMW junk that’s on. AEW is number one and it’s on TNT.

I would like to give a big shout-out to a couple of people in the Letcher Circuit Court and sheriff ’s office. I like this little feller so much. He is awesome, you all. If he ever runs for sheriff and he is not elected there is something wrong in this county. I just thank him so much for all he has done for me. Plus, he will be rewarded. Thank you.

God’s holy son was crucified after being hung on the cross and tortured, and three days later the son was resurrected. The church was built on this. So why in the world are churches now having Christmas parties with a thing called Santa Claus reaching presents out to children? This should not be done anywhere near a church. And bringing in a creature called Santa Claus. People, if you’re going to do these pagan rituals, do them at home and not in God’s house of worship. Merry Christmas.

Okay, people. It’s been put right in front of your eyes. Senators Rand Paul and Mitch McConnell opposed federal relief money for the victims of Hurricane Sandy and hollered ‘socialism.’ Now guess who is demanding money from President Biden to help the tornado victims in Kentucky? Rand Paul and Mitch McConnell. When it comes to their people, Paul and McConnell are all for giving federal aid, but when it comes to them and the other Republicans helping other needy storm victims in dire need it is called ‘socialism’ or a ‘handout.’ Wake up, people, and realize what you are voting for out there. And let’s please pray for the victims of the tornados and their families in Kentucky and the other states, especially here at Christmastime. God help them and God help this world.

Well, here we go, another ballgame and another kid hurt. Parents do not know how to act. A sheriff runs and hits a kid? They really should do away with parents attending sports in schools.

We’ve lost over 800,000 Americans to the virus and, thanks to certain governors, are still raising that number. Oh, how I wish our last president had been honest and intelligent.

I turned on the TV and watched President Biden give a speech about the tornado victims here in Kentucky and elsewhere. I want the Republicans to take note of this, because that’s how you give a speech without showing your rear end and bringing politics into it. President Biden has a decency about him that the last president did not. I’m glad we have President Biden in office.

My God, here we go on Facebook. One of my fellow neighbors is complaining about the high price of new vehicles and yells that the cause of it is people buying them all. He should look in his own driveway. Every year, he has a new F-150 or F-250 sitting in his driveway. And I don’t know why he buys an F-250 since all he hauls is a canoe he could haul on a wheelbarrow. It is fools like him that cause the prices of vehicles to skyrocket.

To all you people who were on the Trump Train last year driving through Isom and into Whitesburg with your tractor-trailers are shined up: Let’s put them all together and head to the Mayfield area in western Kentucky and help all those people who are left in need because of the tornado. I bet you’ll not see a Trump Train headed that way to help anybody, especially since it might cost them a dollar.

I have recently made a request to possibly have my garbage picked up. I have a bad back and I have recently fallen again since I made this request. My wife has had double hip surgery, and all we have asked is for a little backup to help us pick up the garbage since we are no longer able to do it. When the people who will be coming back at election time read this, they will know who this is, and they better know there is no sense in them coming up here if this is the way it’s going to be. They apparently don’t need me.

President Biden has issued a warning to Russian President Vladimir Putin, saying that the U.S. and European allies would unite to impose strong economic penalties and other punitive actions on Russia should it mount an invasion of Ukraine. I’m so glad we no longer have a president who sucks up to Putin and willing to sell out America just to get a hotel in Moscow.

. To the person claiming that America’s leaders have forsaken the laws of God and have brought a reproach on our nation: For God’s sake, would you shut your idiot yap? It’s people like you are one of the main reasons other civilized nations look at us like we’re freaking insane.

Talk about stupid criminals: FBI agents have identified scores of January 6 Republican terrorists from public posts and records subpoenaed from social media platforms. Prosecutors use the posts to build cases. Judges now are citing defendants’ words and images as factors weighing in favor of tougher sentences. As of Friday, more than 50 people have been sentenced for federal crimes related to the terrorist attack. In at least 28 of those cases, prosecutors factored a defendant’s social media posts into their requests for stricter sentences, according to an Associated Press review of court records. Many terrorists used social media to celebrate the violence or spew hateful rhetoric. Others used it to spread misinformation, promote baseless conspiracy theories or play down their actions. Prosecutors also have accused a few defendants of trying to destroy evidence by deleting posts. Approximately 700 people have been charged with federal crimes related to the riot. About 150 of them have pleaded guilty. More than 20 defendants have been sentenced to jail or prison terms or to time already served behind bars. Over a dozen others received home confinement sentences.