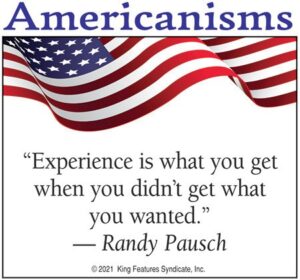 AEW is All Elite Wrestling.

Well, it’s getting funnier every day. The poor old Republican Party, especially the ones of Fox News like Sean Hannity, Laura, Brian, Mark Meadows. The more they try to lie the more the truth comes out about January 6. They can’t even tell a good lie anymore. It tickles me to death.

I finally have it figured out. We need to get our best scientists to come down the convenience store here at Isom and get up with these geniuses who hang out here and learn from them how easy it is to solve the world’s problems. It amazes me what I hear in here and all these geniuses can do. I’ll be honest with you; I’m just glad they don’t have to drive more than a two-mile radius to get to this place. They wouldn’t be able to find their way home if they did. How do you like that, Johnny?

Who would do something so bad as to murder the elderly woman here? This is just so bad, and I want the family to know I am praying for them. May God be with them.

Just driving down the road and hearing the great news that Senator Joe Manchin is shutting down this Build Back Better Bill the senator’s fellow Democrats have been trying to force on us. We don’t need or want the government to pay for. If these women who have all these children can’t afford to pay a babysitter, tough luck. Not my problem. They should have gone to school to become something other than a store clerk or a fast-food worker. Anyway, they’d probably just use that money to buy more meth. I just get peed off when I think about Joe Biden and the Democrats wanting to use my tax money so the old people, the Baby Boomers they call them, can get free eyeglasses and free hearing aids and not have to pay for their false teeth. They are just in the way, and they’ve already broke us with the Medicare. If they can’t afford their medicine or a pair of cheap reading glasses that’s not my fault or my wife’s fault or my children’s fault. Suck it up and pay for your own stuff, people. We work hard every day to get what we have. Trump 2024, baby. This free ride stuff is going to be stopped soon.

Little sister, it’s been many years, but I hear my great-nephew is dead. I never met the young man, but my condolences to you. Time passes and we grow old if we are lucky. And I am lucky, as I’ll be 68 next month. I hope you are doing well, Sis. From the boy in the hollow who used to drink Bad Branch water.

The person who had bedbugs is coming back into the rec center and walking. People there better watch out for bedbugs.

Don’t even hope for a white Christmas. Climate change deniers have made sure of that.

I hope the damn drug dealers have good damn time spending the hell out of the money they take from families at Christmas time. And I hope it bears on your conscience so bad you have a peaceful Christmas. I hope you are brought to justice soon.

I have a churchgoing cousin who went to the nursing home and told the people there that I don’t even feed my mother or make sure she has a bed to sleep in. This person told a bare-faced lie and then called my sister in New York and told her a big pack of lies, too. Just who do you think you are going around and telling a bunch of lies, you Bible-thumping idiot?

People say they don’t believe in global warming, that they don’t see anything warm about 70-degree temperatures in mid-December when it used to be cold.

Imagine that, a scumbag like you trying to judge me when you don’t know wrong from right and good from evil.

I read about the death of Mr. Jack Burkich and just wanted to mention that he was a gentleman, a scholar, and a good friend of mine. During the 30 years I worked in Letcher County, I spent a good deal of time in the schools. Mr. Burkich always cooperated with any good educational program. We were also members of the Rotary Club together. He will certainly be missed by me and by Letcher County. This is Paul Morris, retired county Extension agent.

When I worked in the coal mine the owner told me he didn’t pay income tax because he had a CPA take care of that. When Donald Trump nor any of his friends pay income taxes, how can they expect to not have a budget deficit? Someone has to pay taxes, and the poor people can’t pay them all.

One in one hundred older Americans over the age of 65 have now died from the ‘tRump’ Virus, approximately 75 percent of the total death toll in the country to date. Will you be missing a grandparent at Christmas dinner this year?

To you green earth people: I get your idea and I would like to see the earth green, but we’ve got worse problems than that and it’s called garbage.

I have watched the video of the fight between the Owsley County people and Perry County Central. I have issues with the way it’s set up. Number one, it’s not the first time there’s been a fight on a basketball floor and people have tried to separate those involved. I don’t agree with the charge they are placing against the guy. Number two, the Perry Central player — the darkhaired girl — was pushed back twice and she still went back to fight. What about charges against her? If you’re going to file charges, charge them all — the players and the adults.

I see Rand Paul finally made it to western Kentucky a week after the tornadoes hit. I guess he too busy in the beauty shop getting that hair all curled up with wet gel in it, since he thinks he’s so sexy looking. And poor old Mitch McConnell still hasn’t made it, which I understand since he doesn’t even have enough strength to walk through the Capitol. Our country just gets worse and worse day by day.

. I watched with great interest the television coverage of the funeral of Senator Bob Dole. What a great statesman he was for his entire career. He elicited respect from both political parties because he always exhibited his love for his country and for his countrymen. He was the embodiment of compassion and courage and was a role model for other people seeking political office. At the same time I was wondering what kind of a funeral will be given Donald Trump when his time comes. They will probably have to hire some professional mourners to sit on the front row and pretend to grieve and hire Sean Hannity and some of his colleagues from Fox News (all of whom have sold their souls) to give some phony accolades about what a great American Trump was. And life goes on.

It never ceases to amaze and amuse me how my fellow Democrats simply cannot let go of the crazy Mr. Trump. Every sentence they utter about any kind of politics must include either ‘Trumpsters,’ ‘tRump,’ etc.’ Why do you idiots allow this man to take up so much room in your head? Let it go, folks, just let it go. He can no longer bother you or the country. Well, no, that’s not true, is it? You allow him to bother you and take up space in your heads every day. Your anger, frustration, and bitterness are showing, and you’re letting him beat you every time you mention his name. That’s all.

It is very refreshing to have a president who actually conducts himself presidentially instead of spending four years tweeting useless propaganda. Trump was obsessed with his endeavor to belittle the Obama administration because he knew that his predecessor had the enviable qualities that he could never duplicate; intellect, integrity, and compassion for working class Americans. When the January 6 Committee is finished with their investigation Donald Trump will have plenty of time in his jail cell to scheme as to how he can add to his legacy.

To the person who said, ‘If Donald Trump has been out of office for nearly 11 months and he’s still the top news story, that doesn’t say much for Joe Biden at all’: On the contrary, it says that Biden is a decent human being, instead of the loud-mouthed, racist, treasonous piece of diseased you-know-what that ex-president Trump, aka ‘Putin’s Puppet,’ is. What’s the matter? Afraid people will finally get to learn about all the treasonous acts your traitor-in-chief is guilty of committing? Scared you’ll see him wearing an orange jumpsuit very shortly?

Interesting. Several Fox News talking heads and Trump family members tried to get the orange jackass to call off the Republican terrorist attack on the United States Capitol, saying it would reveal their dishonesty and hatred of the country, but none of them mentioned that it was unpatriotic to destroy the seat of the Federal government. I wish Republicans could learn to love America.