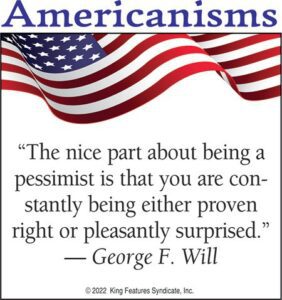 There was no hope for Todd this past Christmas. Thank you.

Go ahead, scumbag, and live in your own little private world full of lies. You’ll be alright until you die, and then you’ll find out what you are.

You better hurry, mister superintendent, and pick another one to be on your side. It’s starting to crumble.

So, here we go. Twothirds of the way through the season with zero wins in jayvee action and zero wins in varsity action. Two new coaches do not solve the problem, so now we are right at the old Green tradition. Carry on. Everything looks well. Laugh out loud.

The bears are tearing the garbage out of the cans and tearing the cans all to pieces. Meanwhile, all the people who brought those bears in here — we didn’t have bears when I grew up — are causing us not to be able to keep our garbage out of the woods because the bears are carrying it there. I think the state fish and wildlife people and the others who brought the bears in here ought to have to come and pick it up.

(Many of us can sympathize with the problem you are having with bears getting into your trash, but no person or government agency is responsible for bringing the bear population back into Letcher County. They left when all the mountains were clearcut of trees and have been coming back as the forests continue to heal. After all, it was in the mid-1960s when then-Kentucky State Trooper Roy Hall made news statewide when he killed a bear when it ran in front of his police cruiser at

I’d like to take a few minutes and congratulate some of our neighbors for having great Christmas light displays. First, I would like to congratulate Larry Bentley at Haymond. He did an outstanding job. Also, the lady who lives on the hill above Sonny Nelson’s place had a great display, too. And Mr. Davis up in Chopping Branch, his decorations were outstanding, and so was George Potter’s in Cannel City Row, also in McRoberts. We sure had pretty lights this year and I would like to congratulate everyone who put up such wonderful displays. It makes us feel merry and glad. I hope you all are having a happy new year.

To a certain two-faced lying grouch: You think 2021 was the year you got by with whatever you wanted to, but just think again. 2022 might be the year when you go to that dark place where you belong.

To the two people who talked one of my family members into getting the jab, because you all are so ignorant and uneducated: Do you all know what you have done? Well, of course not, because you cannot see what is in front of your face or the obvious. You just see what the news tells you. I am tired of hearing, ‘science this and science that.’ Wake up, you fools.

I pray to God that He will let me write on my tomb. I go to places and all I can hear are people wanting to talk, talk, talk, and gossip when they don’t even know what they are talking about. The Bible says to bridle your tongue. People, you better watch out. Your tongue can send you to hell.

To the person who called me trash: That seems to be your specialty in life — working in it, being around it, and knowing all about it fits you to a T.

If everyone is so concerned about the ozone layer and all that, why doesn’t the world just shut down for a week at least four times a year? We would see it clear itself up. Think about it. It would work.

We sure need Mitch Mc- Connell and Rand Paul to support the postal reform act that’s waiting in the Senate. Most people don’t know the post office isn’t supported by taxpayer money, but Congress does control it and 15 years ago crippled it financially so that it loses money today. Let’s get on board. It’s a bipartisan bill and we sure should support it and get our good postal service back again. Thanks.

Before the 2020 election, I had friends who told me the coronavirus threat would be over after the election, that it was just a Democrat plot. Well, the virus is still going, and the Republicans are still saying it’s a Democrat plot. I don’t think the Democrats are so powerful they can make people sick for votes. I think the Republicans don’t care if people get sick or not just as long as they can use an issue like this to try to get votes.

Over the Christmas weekend two of my cousins came in from Louisville but they didn’t stop by to see me. They went to their mom and dad’s house and then went to visit their other two cousins. It just goes to show you even your cousins will stab you in the back. It’s going to come back to them sooner or later. Karma will hit them right in the hind-end.

To the people of the City of Jenkins: I am a former employee of the city and I just want everyone to know that the mayor and city council have never given the city employees even a dollar raise in pay in seven years. All they ever say is they don’t have the money. But the election is coming up pretty soon and we may need to change both the mayor and the city council. Thank you.

I am in Pikeville today and gas is 42 cents cheaper than it is in Whitesburg. I could understand maybe a nickel or 10 cents or even 15 cents, but 42 cents is too big of a difference for the short distance there is between those two towns.

(Gas prices have been much cheaper in Pikeville than much of the rest of southeastern Kentucky the past several days because of a gas war there that has resulted in competing outlets — Murphy USA, Speedway, Autobahn, Food City Gas ’N Go and Double Kwik — now selling it at a loss. On the other hand, gas continues to be about 10 cents a gallon cheaper in Whitesburg than it is in Hazard and Jackson.)

To the person who said, ‘God put coal here for us to burn’: If what you say is true then maybe He shouldn’t have made it a finite resource, huh? You imbeciles are beyond pathetic.