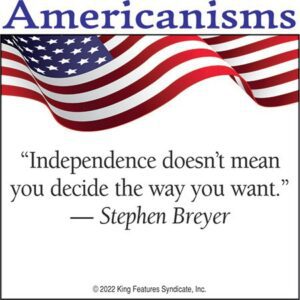 In addition to the telephone and the U.S. Mail, The Mountain Eagle accepts comments to Speak Your Piece by electronic mail. Our address is: mtneagle@bellsouth.net. On subject line put Speak Your Piece.

They tell me if I use a thousand kilowatts of electricity from a fossil fuel-powered electrical plant that I’m using the equivalent of two prehistoric trees, each one thirty feet tall. That doesn’t sound too bad. But anyway, I’m against a lot of things. I’m against Boy Scouts having Girl Scouts in them; I’m against Putin, who is something you wipe off the bottom of your shoe after walk through the chicken house. God bless America. Just thinking about things this evening. Hey, who is in your church, the Queen of Heaven? Easter? Think about it. Look it up.

Now that the Supreme Court has thrown it back to the states to decide how much women can control their lives, if you discover you have an unwanted pregnancy contact State Senator Robert Stivers about what to do. He is in charge of your reproductive system now.

Good evening. Don’t forget your pets. Whether they are inside or outside, fresh water is essential, especially with temperature in the nineties. I don’t know how pets live like this is the summer’s heat.

I noticed where someone commented on much worse acts of cruelty than chicken fights. They brought up some good points of acts far more cruel than cockfighting, and I agree. It will long be remembered how socalled animal rights activists stood back and said nothing about the cruel ways those chickens were killed. How can they defend burning them alive? It doesn’t matter if one is pro or con concerning cockfighting, the manner in which those chickens were executed was horribly cruel.

I still say a fellow down below the mouth of Doty Creek still needs to take a bath in lye soap. And he also needs to wash his mouth out with lye soap, because you can’t believe a word he says.

To the caller who says ban the COVID shots: Honey, are you crazy? That’s what keeps you from getting COVID. A lot of people have died. Heck, honey, I already had depression way before I took those COVID shots and I sure don’t have diabetes even though I’m overweight. Somebody is

feeding you B.S. With the shots, at least you won’t get it so bad. Let you get COVID and see how you feel about it.

Well, it looks like we finally got our prison in Letcher County. It’s at Burdine.

I can’t help but wonder how many young girls will be murdered by the young boys who made them pregnant after this Supreme Court ruling on abortion. Young guys do not want to be fathers, and they will be scared into doing bad things when the girl tells them she’s pregnant. This is sad time for America.

To the person who is calling another person’s comment asinine: Actually, that person’s comment was more plausible than your politically motivated, unintelligent, misleading verbalism. Selling guns to people under 21 has nothing to do with knowing the difference between school shootings and being in combat, but everything to do with the second amendment — a constitutional right that guarantees protection of the people, by the people, and for the people from power-hungry politicians that prefer a Leninist form of government. In 1791, Thomas Jefferson, with a cadre of statesmen, realized the resolute protection of the second amendment and thus proclaimed the rights of the people to keep and bear arms shall not be infringed. Thank you.

Does Sam Wright really believe he can run the county? If he doesn’t do any better than what he did while he was on the bench Joe Biden would be a credit to him. People of Letcher County need to wake up. Terry Adams has made us a good judge and will continue to make one. He knows more about business than Sam Wright does.

floor. Now, where were my neighbors? Nowhere to be found because they don’t care. If another person from the neighborhood fell, they would run to help them, but there was no one to help us whatsoever. It just goes to show that people don’t care anymore.

Those zany Republicans. They claim the January 6 hearings are unfair and partisan even though all the witnesses have been Republicans. They do this because they know 80 percent of their sheeple are gullible enough to fall for it.

I hear the IRS is trying to get everybody’s bullets. They say they want you to bring all their bullets in.

The people who are for everyone have any type of gun no matter what have watched too many cowboy movies where the good guy always shoots straight and fast. Look at the school shooting in Texas where the police were afraid to move in and couldn’t shoot straight. If police officers are too afraid to shoot straight, how do you expect schoolteachers shoot straight? Guns get you killed.

Hey, women of Letcher County, past and present. Raise your hand if you are one of many who traveled to Lexington or Louisville to have an abortion in your younger years even though your parents didn’t know what you were doing. Wouldn’t your parents die if they knew what you were doing at the time? How do you feel about the Supreme Court overturning Roe versus Wade? I hope you will show respect to today’s women of child-bearing age by voting against these right-wing radical Republicans who are trying to take our country back to the Civil War days.

Almost everyone knows Biden really won the 2020 election with a popular vote of more than seven million more than Trump. Just as important is knowing that if Biden had lost, he would have been man-enough to have admitted it and not take a hatchet to our democracy

and to my vote. That’s a real man. Thank you.

Hello, Speak Your Piece. I do have something to say. I am wondering why our gas prices are so high and our grocery prices are out the wazoo. I don’t know what people are going to do. If you can’t see that this president — and I use that term very lightly — isn’t worth a hoot.

Thank God they overturned Roe v. Wade. Listen, young men and old, if you breed them you feed them. They’re not throwing these babies in garbage bags anymore. God has put in the hearts of the Supreme Court to rule for the lives of the babies. Christians can smile about this because the babies are going to live. God bless America and God bless the Supreme Court. Have a good day.

People, they are going to have to do something about these bears around here. I’ve had one come on my porch the last two nights. I’m not going to kill it, but when season gets here I’m going to have me some bear soup. I advise everybody to get out when bear season is in and kill most of them. Have a good day.

Statistics show that one in every five men have been involved in an abortion at some point in their life, with many of them never even knowing they made someone pregnant during a onenight stand or whatever. Imagine how this is going to go over with them when learn they did actually make someone pregnant and now they’re going to have to pay the cost because of a crazy ruling from five religious zealots on the United States Supreme Court.

To all you so-called religious people who want to rest of us to live under your rules: I don’t care whether you are Catholic, Christian, Muslim, Jewish, Mormon, Hindu, or if you worship Satan, just take your religion and your beliefs and stick it where the sun doesn’t shine. Worship your god all you want in your church and at your home, but leave the rest of us alone.

I would like to know if anybody else’s house shook real hard Sunday morning.

As a concerned citizen of the United States of America, I am writing concerning the talk of gun control. There is nothing wrong with the guns. What has happened is our nation’s leaders are out of control and have been for a long time. Both parties have failed the American people and instead of looking at themselves and admitting that they have done wrong, they want to blame it on the guns. We in America have always had guns and we need to see that we always can have them. That being said, there was a time when

high school boys would drive their pickup truck to school with their guns in the back window and when school was out that evening they would take their guns and go squirrel hunting. But then when the government decided they didn’t want God in public schools anymore and they took the Ten Commandments down and didn’t want anyone to pray anymore, then they opened the door to let Satan in their schools and now children are taught that they can live like dogs. They are not taught to love their neighbor as themselves, they are not taught ‘Thou shalt not kill’ so the government has rejected God’s laws and when you reject God’s laws then there are consequences. So, our nation’s school systems have raised a generation that has no respect for the laws of God, and now America is reaping what they have sown. Our nation’s leaders need to repent and put God back in public schools and teach godly laws. Without Jesus there is no hope.

Could we have a Straight White Person Day? We celebrate everything else and white, straight people have made contributions to society too.

To a certain person: Dear, the only reason you say I am the psycho one after 25 years is because that’s

exactly how long it took you to drive me insane. And it’s totally moronic for you to claim I am getting the police to do my dirty work for me. The cops are not stupid, and they won’t take long to trace every other person you have driven nuts over the years right back to you.

I feel sorry for all the children who will be victims of the Supreme Court’s ruling on abortion. Just imagine what will happen to those kids who will now be born to parents who don’t want them, don’t love them, and wish they’d never been born.

Read 2 Peter 3:10-12: God has already said He is going to destroy this earth with fervent heat. Everything will melt. We have people in our government that think they can save the earth by not burning coal and oil or anything else that is used for fuel that God gave us to use. God created coal and oil and it is for us to use it. So, I would say to our government that you had better burn every block of coal and all the oil that you can for very soon it will all burn. It will melt with fervent heat. God has already declared that He will destroy this earth. Your government cannot stop that from happening. Repent of your sins, get ready to meet God. Jesus is coming soon.