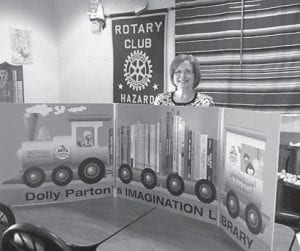 — Whitesburg Rotary Past President Margaret Hammonds was the guest speaker at the Rotary Club of Hazard on Sept. 12. She spoke about the Dolly Parton Imagination Library, an early childhood literacy program which the Whitesburg Rotary implemented in January. The Hazard club plans to start the program in its area by spring. Hammonds was instrumental in bringing the program to Whitesburg during her tenure as Rotary president, and is the coordinator between the club and the Dollywood Foundation. The Imagination Library gives a book a month to children under five years of age who live in Whitesburg. To download an application, visit www.clubrunner.ca/whitesburg-ky/. There are 143 children registered in the program in Whitesburg.