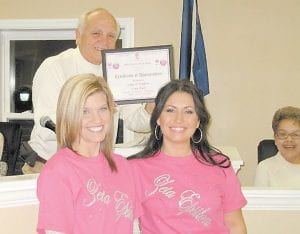 GROUP THANKS CITY COUNCIL — Autumn Boggs (right) and Megan Carty (left) posed for a photo with Jenkins Mayor G.C. Kincer after presenting the Jenkins City Council with a certificate of appreciation from Beta Sigma Phi during the council’s November meeting.

Members of the Jenkins City Council want something done about vehicles speeding through the town and trees growing too close to utility lines.

At the council’s November meeting, several council members expressed concerns about speeding in the city. Council member Terry Braddock said speeds are especially excessive on the lower end of Main Street toward Burdine and member Rebecca Terrill Amburgey said speeders endanger people walking alongside the road where there are no sidewalks. Council member Carol Anne Litts said speeding is also bad on Lakeside. Council member Chuck Anderson said it is a citywide problem, but it is particularly dangerous at Burdine Elementary School in the hours when children are getting on and off the buses. Mayor G.C. Kincer said the Jenkins Police Department tries to have officers at Burdine and at Jenkins Middle High School in morning and evening hours.

Councilmen Robert Adams and Braddock both commented on trees that are growing too near power lines and said it is also a citywide problem. Anderson said most power companies have abandoned the practice of clearing rights of way and now prefer to just fix lines when trees fall on them because it is cheaper. He said it is a statewide problem. Mayor Kincer said the problem will be addressed when the council meets with representatives of AEP in franchise negotiations. 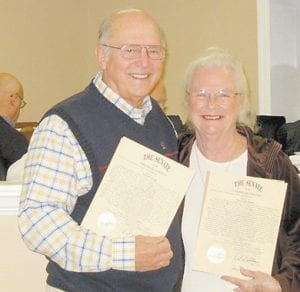 TWO HONORED FOR THEIR WORK — Wendell “Butch” Boggs and Mary Ann Mullins were presented Lifetime Achievement Awards from the Kentucky Senate during the November meeting of the Jenkins City Council.

The council also talked about the ongoing Payne Gap Water Project. Under the current plan for Phase II of the project, water lines extending from around Fishpond Lake to Mayking will bypass the Kona strip connector that runs from US 119 to Martha Jane Potter Elementary School. Phase I took the lines from the junction of US 119 and US 23 to the point below Fishpond Lake.

District Five Magistrate Wayne Fleming brought the matter up when Paul Nesbitt of Nesbitt Engineering recommended that G&W Construction of Morehead, which submitted the low bid of $1.55 million be awarded the contract for line extensions in Phase II. Nesbitt also recommended accepting Kentucky Glass Lined Tank System’s bid of $392,498 to construct the storage tank that will be located at the junction of US 23 and US 119. Glass Lined Tank Systems is a Lexington contractor that specializes in water storage tanks. The council voted unanimously to accept both bids.

Fleming asked Nesbitt if it was true that the lines would be extended past the Kona strip without connecting to the homes along the road or connecting to the Fleming-Neon water system’s lines. Nesbitt replied that the plans had come through Abandoned Mine Lands (AML), which is paying for the entire project. Nesbitt said AML approved the plan but it does not include extending lines along the Kona Strip in Phase II. It will be covered in Phase III, which will begin in one or two years. However, Nesbitt said the bids on Phase II had come in well under the $2.6 million that was allocated by AML and said there is a possibility of using the extra funds for a change order to run lines down the Kona Strip. He also said AML has approved funding for a line extension from Jenkins through Haymond to connect water lines in Jenkins with those belonging to Fleming-Neon, but no date for release of funds has been set.

Fleming said it is crucial that Fleming-Neon be connected to the main county system in case it experiences a water supply problem and asked Nesbitt if he could ask for a change order to use the leftover money that has been allocated for Phase II to extend the lines through Kona, but Nesbitt said the request would have to come from Mayor Kincer, who agreed to contact AML and request the change order.

The entire Payne Gap project will be turned over to the Letcher County Water and Sewer District when it is complete. Lines in Phase I have already been turned over and are delivering about 222,000 gallons of treated water a month to customers in the area around Fishpond Lake where work has been completed. The City of Jenkins agreed to administer the project after Fleming spearheaded a drive to allow the Letcher County Water and Sewer District to turn the project over to Jenkins to ex- pedite the extension of lines in the Payne Gap to Mayking area, where the need for treated water is great. Jenkins will sell county customers water through a master meter located at the storage tank at the junction of US 23 and US 119. Mayor Kincer did ask that the Jenkins City seal be painted on the tank, which will be visible from both US highways, although it will belong to the county.

In other business, Kincer presented the council with a set of rules to govern citizen participation in council meetings. Titled “Rules of Decorum for Citizen Participation,” the document establishes rules to allow for a “fair and informed decision making process” and calls for civil, respectful, and courteous discourse and behavior. Under the rules, all citizens may participate in the public process but must sign up in order to address the council during council meetings. Citizens may speak only on the matter they signed up for or in the case of public hearings, those matters on the agenda. Citizens are encouraged to prepare their remarks in advance so they can be submitted for the public record and a time limit will be placed on comments. Speakers will address the mayor and will conduct themselves in a civil and respectful manner.

Councilman Braddock said he had some objections to the rules because he felt they limited citizens’ opportunities to speak. Amburgey asked if the council could take the rules home to examine them more closely before voting on them at the next meeting and Kincer agreed

City Manager Todd De- Priest told the council city workers had found and repaired two mainline breaks that accounted for a signifi- cant amount of the loss. He said they also found one line leaking that no one knew was there. Mayor Kincer asked if the new lines on Lakeside are connected to the system, but DePriest said they aren’t ready.

Nesbitt told the council the new lines on Lakeside will be turned on when the work is compete and said all the old lines are turned off together when new lines go on. He said Phase III of the Jenkins Waterline Replacement Project is about 70 percent complete as far as the work goes and about 40 percent of the funding has been spent. The spending discrepancy is because pumps and other major hardware haven’t been purchased and installed yet. Nesbitt added that due to shutting down work during the Homecoming Festival and a more difficult time laying lines because of the presence of other underground utilities on Lakeside, the contractor had requested an extension until January 31 for Phase III. He said the U.S. Department of Agriculture’s Rural Development Agency has approved the request and the council voted unanimously to approve it.

Nesbitt also said that so far there have been no line breaks in the new water lines and said he and DePriest have monitored the new lines closely and are pleased with them. He added that the monitoring systems for the sewer line project are being installed and lines are being monitored.

The council presented two Lifetime Achievement Awards from the Kentucky State Senate to two Jenkins citizens. Wendell “Butch” Boggs, a longtime business owner in Jenkins who owned and operated Boggs Pharmacy, and Mary Ann Mullins, who spearheaded the drive for the World War II Memorial in Jenkins, were honored by District 29 Senator Johnny Ray Turner and the Kentucky Senate with the awards.

Kincer also honored the Jenkins Volunteer Fire Department ( JVFD) and thanked Fire Chief Rick Corbett and David Wright who represented the department. Kincer said the JVFD had gone above and beyond in putting out the fire at Mountain Breeze Apartments before it became an absolute disaster. He said he had spoken with a representative of the state fire marshal’s office who had praised the fire department’s professionalism and said it had far exceeded what most departments could have done in controlling the fire.

Corbett told the council there is a constant battle to keep up funding for equipment and other expenses and reminded them that the Ladies’ Fire Crew will have a spaghetti dinner Friday, November 9, during lunch hours. He said the meal is $6 and can be had at the firehouse or it will be delivered to local businesses and homes. Contact the fire department or a member for delivery information.

Members of women’s service sorority Beta Sigma Phi presented a certificate of appreciation to the council for making their “Pink Out” a success. The Pink Out is a function of the Young Women’s Breast Cancer Foundation that is designed to increase awareness and educate young women about the disease. Autumn Boggs and Megan Carty presented the certificate and thanked the council for its support.

In other city business:

• City Revenue Officer Benny McCall reported that tax revenue of the city occupational tax for the first quarter it has been in existence (the third quarter of the year) stands at $8,258. McCall said he expects more revenue to come in because it has taken some time and effort to sort it out, especially with companies operating in Jenkins from out of state. He also said the report only covers that part of the quarter when the tax was actually in effect. McCall said in the next two quarters it will be possible to get a better picture of the overall effect on city revenues.

• Magistrate Fleming told the council the Letcher Fiscal Court has awarded asphalt contracts for the city, but said the work may be delayed till spring because the gravel plant at Mountain Enterprises is shut down for repairs. He said he and Letcher Judge/Executive Jim Ward are doing all they can to get some asphalt on city streets before winter.

• Kincer announced that former Mayor Robert “Pud” Schubert has agreed to serve in the role of Mayor Pro Tem. The office has been vacant since Roger Profitt returned to Pittsburgh.

• The Jenkins Police Department answered 85 complaints in October, issued 11 citations and made 33 arrests. Two were for DUI, seven were for domestic violence, and four were drug related. Roland Craft was hired as a new officer and the department received a grant for new radios. Total mileage for Jenkins police vehicles came to 2,672 in October.

• The Jenkins Volunteer Fire Department made 34 runs in October and worked three structure fires, two electrical fires, five brush fires, and two vehicle accidents with injury. Mayor Kincer praised the department for its extra service during the snowstorm and said special thanks go to Matthew Corbett, Chris Taylor, Jim Stephens, Jonathon Barrette and Steven Damron for staying at the station throughout the storm and responding to calls.