By TODD PORTER The (Canton) Repository 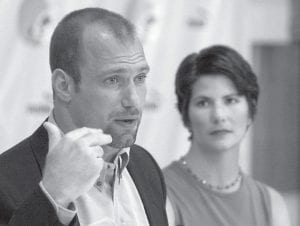 This is an Aug. 30, 1999, file photo showing former Cleveland Browns linebacker Chris Spielman, left, at a news conference with his wife, Stefanie, in Berea, Ohio. Stefanie has been battling breast cancer since it was first diagnosed in 1998. (AP Photo/Mark Duncan)

The sun at Circle K Farm in Grove City bounced off pumpkins. Kids jumped on haystacks. Happiness and joy were in the air on a perfect autumn Sunday.

In the middle of it all, a legendary former linebacker took it in. Chris Spielman has come a long way since his high school and college days playing for the Massillon Tigers and then at Ohio state.

Sunday, Oct. 11, was Spielman’s 44th birthday. It was another year he got to celebrate with his wife, Stefanie, and their four children: Madison, Noah, Macy and Audrey.

Hayrides, hay slides and pumpkin patches provided a fall distraction for the Spielmans.

Chris Spielman has been relishing these types of moments almost daily since Stefanie was diagnosed with breast cancer in 1998.

The situation never has been more fragile than it is now.

Stefanie Spielman, the football star’s high school sweetheart, was 30 when she did a self-examination of her breast and found a lemon-sized lump.

The cancer has returned again.

Chris wouldn’t discuss the type of cancer, where it has returned, or the prognosis. He said it has recurred multiple times.

“I’ve lost count, but this is her biggest challenge,” he said. “It’s common knowledge. People see her in a wheelchair, and they tend to figure things out.”

In 1999, the Spielmans became active fundraisers for cancer research. They have raised more than $6.5 million.

After Stefanie was diagnosed with cancer, Chris put his NFL career on hold and shaved his head in support of his wife’s battle.

At halftime of the Ohio State- Navy game Sept. 5 at Ohio Stadium, Spielman was honored for his recent election to the College Football Hall of Fame. The long applause probably wasn’t entirely for him.

“In my heart of hearts, I believe the applause was more for her than for me,” Chris said. “Maybe it was for both of us, but with the situation, I think it was for her.”

Stefanie, a vibrant young woman who many thought had beaten cancer, was in a wheelchair. It was the first time the public saw how the cancer had returned with a vengeance.

Before starting the third quarter, Ohio State coach Jim Tressel made a point to say hello to Stefanie on the field and shake Chris’ hand.

“I wanted her to know we appreciate her,” said Tressel, who lost both of his parents to cancer. “Both Chris and Stefanie are of the feeling it’s been their hardship that has given them a chance to make a difference in others’ lives. They’re strong. It’s easier for us to say, ‘That’s how you should be.’ It’s a heck of a lot harder to be that way, and they are. They’re amazing.”

Sundays spent as a family, with the children, ranging in age from 15 to 7, never are taken for granted in the Spielman house.

Chris and Stefanie’s journey, from teenagers who met at a dance club, to talking about Stefanie’s mortality, is courageous and emotional. At first, Chris feared being a single parent. But after a conversation he and Stefanie had not long ago, he was at peace, should that come to pass.

In March, the Spielmans were in an emergency room. Stefanie’s cancer already had returned, and she was undergoing intense radiation and chemotherapy treatments.

The Spielmans, it would seem, have lived a prosperous, full life. He earned millions in the NFL and is adored in Columbus. He hosts a successful show on the biggest sports-talk radio station in the state’s capital. He’s regarded as one of ESPN’s top college football analysts.

And his wife may be dying of cancer.

“She said to me, ‘You proved to me you can do it if something were to happen,'” Spielman said, his voice lowering. “I think she was waiting for me to show her if the time ever came, I could do a good job raising our kids by myself.

“My point being, I was never angry. I think the fear of the unknown, of being a single parent, is something that entered into me. Once she gave me the passing grade, and I proved to myself I have the ability, I’m not angry. I’m not bitter. I have no fear.

“Once again, the temporary separation we will have that ¿ I’ve known I can do a good job and be a good parent.”

Within the last month, Spielman had a serious conversation with his two oldest children. Madison, with her high cheekbones and radiant like her mother, is 15. Noah, with developing broad shoulders like his dad, is 13.

“I told them there’s more challenges ahead,” Spielman said. “I said, ‘Look, there’s three things I do and three things you guys need to do throughout this time in your lives.

One, you do not crawl, walk or jog to God. You run to God for peace and strength. Point two, you have to trust your instincts. Both of you have the Holy Spirit inside your heart. He will guide you on the decisions you make. Believe and trust in that.’ And the third thing I told them was to honor your mother in everything you do all the time.”

“My hope is they look at those every morning before they start their day to deal with a very difficult situation,” Chris said. “From being a father, I keep a sharp eye. My observation so far is they’ve handled the situation better than I could’ve ever hoped.”

Sunday morning church services are held in their suburban Upper Arlington home. The family gets together in the family room to play worship songs. They watch “Greatest Heroes and Legends of the Bible,” a cartoon bible story Spielman records on Trinity Broadcasting Network.

“It’s awesome. Stef was right there with us,” Spielman said. “That’s something special we do as a family.”

Family time on Sundays, whether it be on a hayride or watching a bible story, brings perspective for the kids.

“There’s constant challenges presented before them,” Spielman said. “It’s good to reiterate what we need to do as a family. We watch out for each other. If you stray or if you get down, it’s good to rally around. It’s a natural roller coaster when you experience something like this.”

Despite being dealt a lifethreatening blow, Spielman maintains his humor and wit on the radio and on television. And listeners respond with admiration and respect.

Two days after Stefanie’s appearance at the Navy game, most callers offered support for Stefanie before going ahead with their sports question.

“I pray for work to allow me a reprieve,” Spielman said. “Work is where I can have fun and let my focus be diverted to talking about football or sports for two hours, and I pray to bring focus so I can perform my job at a level I expect to perform.”

The Spielmans’ outlook has been shaped by death’s shadow for more than 10 years. Chris and Stefanie have brought more attention to breast cancer than Chris ever did to football.

“I’m so grateful for the 25 years we’ve known each other and the 20 years we’ve been married,” Spielman said. “I wouldn’t change a thing. The tough parts? That’s life. Life is going through good things and bad things.

“There’s no fear of death in this house. There’s sadness that people have and frustration.”

Spielman looks at this journey¿ Stefanie’s battle with cancer ¿ almost like a play that was called in a huddle a long time ago.

“I think we’ve been given certain assignments in life,” he said. “I like to think we’ve done the best we could for (cancer survivors) in service as opposed to shutting down. Hopefully, we’ve been able to make a difference with the monies raised and the people we met and talk to that our experience can help in a small way.

“This is an honorable and humbling journey we’ve been on. It’s something that is way bigger than being a football guy.”