Sport of archery hits a bull’s-eye

By BETSY BLANEY
The Associated Press 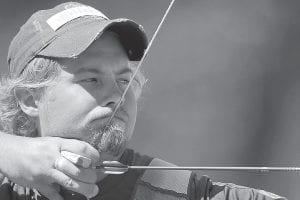 Brady Ellison of the United States took aim during the men’s individual archery competition at the Pan American Games in Guadalajara, Mexico last October. “The Hunger Games” has shined a bright light on the ancient sport of archery and fueled interest across the country to pick up a bow and arrow. (AP Photo)

Two-time Olympian Jennifer Nichols’ eyes light up with she talks about her sport finally climbing out of the shadows.

“ The Hunger Games” has shined a bright light on the ancient sport of archery and fueled interest across the country in picking up a bow and arrow.

The movie’s heroine, Katniss Everdeen, has helped bump the sport to the forefront of pop culture. With the Olympics just around the corner and two sequels planned from the book trilogy by Suzanne Collins, it seems the sport has found its bull’s-eye.

“We’re really excited about that because archery has been a sport that we’ve struggled with, some of the interest in it, but this year it has just exploded,” said Nichols, 28 and the world’s 29th-ranked female archer. She will find out in early June if she’s going to her third Olympics this summer.

USA Archery saw its website traffic climb more than 30 percent in March, when the film was released, compared with March 2011. The organization has gained thousands of new Facebook fans and Twitter followers in the past 12 months as readers have devoured the trilogy.

Hey, even LeBron James was reading “The Hunger Games” recently. USA Archery on last week tweeted to the NBA superstar: “we’d love to get you some (hash) archery lessons if you want to try another (hash)Olympic sport!”

Archery is hip right now. Disney’s animated “Brave” is due out in June, the box office smash “The Avengers” featured an archer and CW Television Network’s show “Arrow” debuts this fall. USA Archery said its youth divisions — girls more than boys — have shown the fastest growth, all of which bodes well for the sport’s future. Some could excel and help propel the U.S. into more consis- tent performances on a world stage in the years ahead.

“The exposure to the sport of archery from Hollywood has been a big boost for everyone involved in our sport,” said Denise Parker, a bronze medal winner in the team event at the 1988 Seoul Games and now chief executive officer of USA Archery. “What would be really great is to someday see a ‘Hunger Games,’ ‘Brave’ or ‘Avengers’- inspired archer make it to the Olympics.”

A strong performance by the Americans in London — some say it’s the strongest U.S. team in a decade — could bolster the sport’s growing popularity, said Brady Ellison, currently No. 1 in the world and viewed as the team’s best shot for a gold medal.

Americans haven’t medaled at the Olympics in more than a decade. At the 2000 Sydney Games, American Victor Wunderle won the silver medal in men’s individual and the men’s team took bronze.

Ellison started archery as a youngster, shooting a compound bow. Nichols also started young. Her father introduced the whole family to archery when she was 12.

“We need the young kids to come in, get involved and to come up through the ranks in archery to provide for the next Olympics teams in the future,” said Nichols, who finished 24th in the individual event four years ago in Beijing and ninth in Athens in 2004. “I think that archery has a great chance of being just a really an enjoyable family sport that really involves a lot of bonding in family relationships — as long as they don’t use each other for the targets.”

Moviegoers see Jennifer Lawrence’s character, Katniss, pull off some astonishing feats in “The Hunger Games,” including shooting an apple from the mouth of a roasted pig. Olympic archers can hit targets that size or smaller from 70 meters, or about 76 yards.

Lawrence learned from one of the best: Khatuna Lorig, a U.S. team member and four-time Olympian who has represented three countries since her first Olympic competition in 1992, where she won a bronze in the team event.

Lorig, 38, said the influence of “The Hunger Games” on her sport has been unbelievable, far surpassing the exposure the sport got from past films with archery scenes, like “Robin Hood,” ‘’Lord of the Rings” and “Predator.” The naturalized American, who’s represented the Unified Team of the former Soviet Union, the Republic of Georgia and the U.S., shared her passion for archery with Lawrence during 15 days of instruction.

The young actor was a quick study, she said.

“She does know how to get around if she wants to shoot ever,” Lorig said. “She’ll never forget that.”