Kentucky wins over ranked Vanderbilt and Tennessee last month were impressive, but neither was as splendid as its performance against Arkansas.

Who can recall so high the intensity level, so sustained for so long? It was “… told ya so,” Gillispean.

UK gave its fans, a CBS television audience and bracketologists 40 minutes of heaven. If Billy Clyde Gillispie figures to stay long-term in Lexington, this was a signature win. Having wobbled east and west for three gruelling months, then winning grinders by thread-bare margins the last month, Kentucky’s game has turned north.

Cohesion, camaraderie and buy-in, the Gillispie doctrine has taken hold.

The Arkansas win had to be a signature performance by Gillispie’s team otherwise it would belong on John Pelphrey resumé. Mr. Unforgettable’s audition featured a team superbly prepared, rotation efficient, kept its poise and played Paintsville tough. 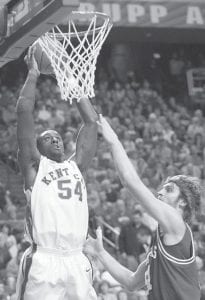 Kentucky’s Patrick Patterson (54) goes up for a dunk next to Arkansas’ Steven Hill during Kentucky’s 63-58 basketball game victory at Rupp Arena in Lexington, Ky., on Saturday, Feb. 23, 2008. Patterson had 14 points and 11 rebounds in the win. (AP Photo/ James Crisp)

It was Kentucky’s most entertaining 40 minutes to date.

In the end, Pelphrey is savvy to “phantoms” in tight games at Rupp. Visitors better have a lead or play tougher because close calls go to the Homeys. To believe UK was guilty of only 10 personal fouls is to believe Ralph Nader will be president.

Beyond No. 1 Tennessee (gulp), what team is playing better than Louisville?

Rick Pitino has something special and he knows it. How do we know? When the Cards host Notre Dame this week on ESPN, look at Da Coach’s wound up tighter than usual intensity.

How else? Watch feisty Edgar Sosa play grown-up basketball and see David Padgett direct his team as if he were Tom Brady.

Cardinal fans looking ahead? You bet. Hoedown at Georgetown March 8 on CBS.

Echoes Across The Ohio Last week college basketball’s centerpiece was Memphis and Tennessee. Then the ominous winds of trouble swept over the heartland. Indiana is fodder for a Sports Illustrated cover from 20 years ago, Shame.

Hoosier hoops’ fall from grace is an echo across the Ohio River. Kentucky fans know.

IU is charged with major NCAA violations its administration will deny, contest and, in the end, accept, much as UK officials did two decades ago.

In 1985 Eddie Sutton was C.M. Newton’s third or fourth choice to replace Joe B. Hall. The Arkansas coach said he would crawl to Lexington for the job.

Sutton had no clue about the job’s fine print. In the end he crawled away in disgrace having steered Kentucky onto sharp rocks of probation and SI ridicule.

Kelvin Sampson was not IU’s first choice to replace Mike Davis. He arrived in Bloomington with baggage and promptly re-opened it.

Like Sutton, Sampson was a bad fit, underestimated the heft of Hoosier basketball, but the money was good and celebrity irresistible.

Both men believed they could handle a penthouse program, tradition, alumni expectation and most of all, scrutiny (media and fans). Wrong on all counts.

The fall of Sutton and Sampson broke because of an alleged renegade assistant. As Newton told balky Sutton he would have to go, Rick Greenspan had to give Sampson a ($750,000) push.

And so, IU basketball is the new billboard for: “those who learn nothing from (UK) history, are condemned to repeat it.”

Kentucky’s shame in 1988 is Indiana’s today. Hoosier basketball is headed for the NCAA infractions dock facing sanctions the program might not deserve, but get much to the embarrassment Ted Kitchel, Kent Benson and others warned about.

At the edge of it all is a herd of duped sports writers, and yappy Dick Vitale. A crowd that loves a good firing as cause to beat the drums of moral outrage.

Echoes across the Ohio.

UK ex-walk-on Dusty Mills’ reaction to his coach’s rage two weeks ago, brought to mind another UK coach who loosed his wrath artfully.

Exactly 50 years ago this week at Auburn, Crigler let his man score just before half-time and Rupp bellowed, “John Lloyd, 150 years from now there will be no university, no field house. There will have been an atomic war, and it will all be destroyed. Underneath the rubble there will be a monument, on which is the inscription, ‘Here lies John Crigler, the most stupid basketball player ever at Kentucky, killed by Adolph Rupp,’ because if you don’t play better, I’m going to kill you.”

Four weeks later, in the Fiddlin’ Five’s NCAA championship win over Seattle, the player who turned Elgin Baylor into jello was John Crigler.

Crystal Kelly had the sort of good by game every basketball player can only dream about. One her grandchildren will believe to be wildly exaggerated. Western Kentucky senior star led the Lady Hilltoppers to a home finale victory last Saturday, scoring 42 points.

After the game Kelly became the first player ever at Western to have her jersey number retired during a season. No. 42.

Dream game for the most popular and affable Hilltopper since Jim McDaniels 34 years ago.

Sporting News writer Bob Hille, “Let’s see if I have this right. (Kelvin Sampson) got caught lying about cheating while still on probation for cheating?

“Ladies and gentlemen, there’s a name for this in big-time college hoops: Coach.”