Hype still rages for UK vs. U of L 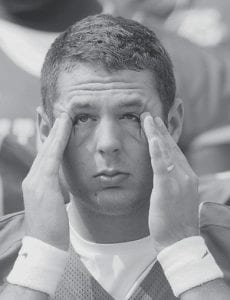 All those still convinced the Louisville-Kentucky football series has lost its mojo because the game won’t open the season, say Aye.

Louder, please. Raise your hands. Let’s see, there’s Tom Jurich and, oh, couple guys in the back with note pads. That it?

The buzz is so loud for this Governor’s Cup match we can hardly hear the cicadas on dog day nights. An estimated 7,000 fans braved last week’s swelter to attend Fan Day in Lexington.

So, No. 11 Louisville at unranked Kentucky is getting more prime talk than chin flappers at Fancy Farm. And fueling this UofL-UK fire, a prediction by The Sporting News – Kentucky will upset Louisville.

Louisville’s is promising. The Big East Conference is still a basketball league with a football fearsome foursome – UofL, West Virginia, Pitt and Rutgers. South Florida is a wild card. Louisville fans expect an 11-1 season and it isn’t unreasonable. The Cards should be in the BCS conversation by November 9. Day after a visit to Morgantown.

Kentucky’s schedule, even with eight homes, is, after Labor Day, whatever the opposite of cake walk is. First coaches’ poll – LSU No. 2, Florida 3, UofL9, Georgia 13, Tennessee 15 and Arkansas 20. Teams on the rise: South Carolina and Vanderbilt.

The Wildcats’ first league games are back-to-back at Arkansas and South Carolina followed by LSU and Florida in Lexington. Kentucky repeating an 8-5 would amount to a considerable seismic shift in SEC geography. Nevertheless, fan optimism this year is no blueblind folly. Rich Brooks will field a seasoned team that knows how to win, has combat experience and depth at more positions than usual. Difference makers: Leaders, attitude, even a bit of swagger.

Stage-light will be on defensive coordinator Steve Brown and the obvious task – stop the run. Otherwise UK must win games 53-39 and 61-45. However it shakes out, Football ’07 in Kentucky sparkles with promise starting September 1. Two extra weeks for blue-red fans to train, leather up to full throat for the Governor’s Cup.

Curious, an 18-year-old being “not comfortable” at a mecca that features a $9 million practice facility, lavish digs next door, an arena where fanatics make UK king of the nation in attendance and a team that attracts national television cover more often than the Yankees.

That Zeller said no demonstrates how UK has finished out of the money on best of the best recruits for several years recently. Maybe too much dazzle, too much love, too much stagelight heat. Kentucky basketball’s limousine and glitz is not for every kid. Upside is it leaves a scholarship for a kid who understands the tradition and requirements to play in Lexington. Maybe Darius Miller.

From a FOX Sports blog: “Terrific job, Gillispie getting Alex Legion and Patrick Patterson for this season and DeAndre Liggins in the class of 2008. But we’re still not sure what Gillispie was thinking after taking 2010 commit K.C. Ross-Miller and class of 2009 guard G.J. Vilarino. It’s a coin flip whether Miller and Vilarino will ever play a game in Lexington since both are a long ways off from playing at that level.”

COMMENT: Offers to Ross- Miller, Vilarino and Dakatoh Euton are gambles. Best part? Leverage belongs to three kids with guaranteed free ride to college. They can change their minds, too.

Last week a sports writer in Texas echoed a theme emphasized here two months ago. Let’s not anoint Gillispie for sainthood just yet. Wait until say, first week of December. North Carolina in Rupp on Dec. 1 and Indiana Hoosiers on Dec. 8 in Bloomington.

If you know a U.S. serviceman overseas who would be interested in receiving Sports In Kentucky (free), please e-mail Bob Watkins at sprtsinky@aol.com