Four weeks into a season and Kentucky is ranked No. 21 in the nation. Clearly, the gods of college football have swung the pendulum. Kentucky didn’t only beat Louisville last week, the Wildcats showed themselves to be SEC “big dog” worthy. Aggressive, physical, deep and poised when time clicks off the clock.

Louisville started the night with two gaffes and ended it the same way. Two turnovers early let Kentucky get a foothold. At game’s end two befuddled defenders lost Steve Johnson in the (high)lights. UofL’s protection of Brian Brohm was mostly adequate, yet Kentucky’s bull rushers got to him enough to cause happy feet and forced him into an uncharacteristic 15 incompletions.

Meanwhile, Andre Woodson was superb and reminded us of General Douglas MacArthur’s “I shall return” promise. Two years ago Woodson fumbled away an upset chance against UofLat Commonwealth. Last Saturday he was poised and dazzled to the end. Final punctuation? A public hug and kiss for his mother. 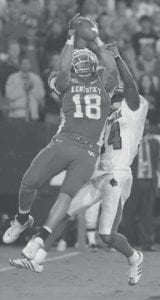 Steve Kragthorpe’s Cards are wounded but had better cowboyup with futures South Florida, Cincinnati and Utah showing ambitions the experts associate with West Virginia and Rutgers.

Kentucky? The football gods have indeed swung the pendulum.

Beyond the usual bravado and strut, these Wildcats play with a brand of relentless rawhide toughness Charlie Bradshaw searched for (badly) in 1962.

Skill and depth has made Kentucky SEC-legitimate. Beyond an ensemble of solid seniors, who knew Steve Johnson, John Conner and Zip Duncan would be prime timers? That starters Myron Pryor and Ricky Lumpkin would watch the big game and UK would win?

Brings us to the new Rich Brooks. Curious, how smart he has become since Nov. 4, 2006. Starting with Georgia, Brooks’ team has won eight of nine games. The lone blemish may be rectified Nov. 24. Tennessee.

Two seasons ago Brooks was rated worst coach in the SEC (by an idiot in Alabama) and was among the Top 5 coaches on a hot seat list last preseason.

Today, the new Rich Brooks has …

– Surrounded himself with people who make him smarter.

– Football players go to class or else. And, players’ names don’t show up on police blotters, or else.

– Insisted that Louisville be moved down the schedule. Stroke of genius. The new Rich Brooks draws fewer comparisons to well-intentioned John Ray and more with a UK fatherly favorite, Blanton Collier (1954-61).

Curious, isn’t it, how solid team performance can change a coach’s everything? Charlie Weis knows.

NEWS. The Thin Thirty, story of University of Kentucky football in 1962, is causing a sustained buzz around the Commonwealth. Author Shannon Ragland’s meticulously researched look inside UK’s program in 1962 makes fascinating reading for those interested in the ignominious Charlie Bradshaw era at UK (1962-68).

1. UK football ’62 was a model for what the NCAA calls “lack of institutional control.” Amazing how director of athletics Bernie Shively and the administration failed to see why so many scholarship players left the program.

2. UK football ’62’s story would have been a smashing cover for Sports Illustrated titled “Shame,” i.e. Wildcat basketball in 1989.

NEWS. The late and great Cawood Ledford said “Goodbye, everybody” for the last time as Voice of the Wildcats 15 years ago (1992).

VIEW. Hall of Famer Ledford came to mind this week when the noted voice of Mississippi State sports, Jack Christil, started his 55th year behind the microphone. This would have been Cawood’s 54th.