Faces of Ky. hoops past and present

If Kentucky basketball’s glorious past had a face and nickname, both would belong to Raymond ‘Corky’ Withrow.

At 75, Withrow will be inducted into the KHSAA Hall of Fame next spring. Good thing coming to a deserving man very late. A man who, with his athletic skills and personality, brought much credit to his home state.

It’s been more than 50 years since All-American was attached to Corky’s name. He was good enough to be drafted by the Milwaukee Braves, hit 325 home runs in the Minor Leagues and earn a cup of coffee in St. Louis, sitting next to Stan Musial.

To spend a day with Central City’s finest from the 50s, is to revisit an era when fundamentals and preparation rated an eyelash ahead of team play, and all else fell into place. Corky and the Golden Tide parlayed all else into a golden era for Central City.

Corky Withrow. Big man at 6- 4, with big heart, big hands (to talk with), technicolor personality, who turns storyteller on a dime. His steely recall for basketball lore pulls back the stage curtains on Days of Peck, Uncle Ed, Adolph, 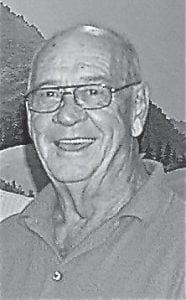 Corky can be an electric mix of modesty and semi-bombast, stirred to the theatric smile-andfrown symbol. He laughs from the belly up at a good anecdote, but there’s still the punch-in-the-gut 16-footer by Freddie Maggard in the ’56 State Tournament that sent Corky’s team home a third year in a row.

“Don’t mention that shot to me. I don’t wanna hear about it,” Corky bellowed one day last summer after a hand shake with Maggard. For that killer basket 51 years ago, Maggard apologized. Without tongue-in-cheek. Maybe. Corky burst into laughter finally, but there was pain in it.

Toss out a basketball issue and Corky’s eyes flash like hot coals,

the way they must have when Mister

Gish stoked him with: “Are you gonna let those guys embarrass you?”

Those guys never did.

So, a plaque for Corky in the KHSAA Hall of Fame. Finally.

He won’t say so, but I have a hunch the hall of fame thing means more to others now. Statistically, Corky was qualified before the Nixon Administration and was first nominated 20 years ago. Yet, even with a tenacious lobby effort pressed forward by Charlie Thurman in Hardin County the last two years, he has been to KHSAA selectors what Ron Santo ist oC ooperstowne l ectors. Largely ignored.

If the KHSAA’s Hall of Fame had a wing for “Slipped Through the Cracks,'” the line would go around the block and glass etching on the front door would be Withrow’s image.

Items you may find interesting about Corky Withrow …

• Originally a UK signee, Corky’s Gish-inspired devotion to fundamentals, hard work and team play, along with physical presence and style, his name would be in sentences today with Cliff Hagan and Frank Ramsey.

Withrow, Hall of Famer, the Face

of Kentucky Basketball Past.

The Face of Kentucky Basketball Future? Orlando “OMV” Mendez-Valdez has set the bar for Latin-Americans.

The kid from football and baseball rich Texas, was, last season, the epitome of lead man taking his club to big wins by force of will, audacity and skill. Legacy? Mendez-Valdez set a doubledouble of significant importance: school record 101 3-pointers (home run offense) while dishing 140 assists (unselfishness) and led his team in steals on defense. Across the board balance.

Because of basketball, then transcending it, Mendez-Valdez was selected Sun Belt Conference Student-Athlete of the Year. Then, last week, OMV accepted his college degree at WKU ceremonies.

The achievement prompted WKU director of athletics Wood Selig to say, Mendez-Valdez is, “… the embodiment of what results from hard work, dedication and preparation (can do). “… a terrific role model for today’s youth.”

Future? One day, OMV’s No. 20 will hang alongside those of Clem Haskins, Jim McDaniels and 20 others at Diddle Arena.

The Face of Kentucky Basketball

In its May 25 edition, The Sporting

Kentuckians in Top 50? Ashland’s Brandon Webb (Diamondbacks) at No. 31.

That Chicago Cub diehard George Will cast a ballot in times of steroid-fattened numbers, brought to mind a passage from his book “Men At Work” in 1990,was this typically elegant paragraph:

Armed with 19 years hindsight and specter of free agency gone mad, combined with what Barry Bonds, Roger Clemens, Alex Rodriquez and others have done to Baseball, a question for 2009: Where’s it going?

Finally, a Will gem from same book.

“For the fan, freezing and savoring images is an important part of the pleasure. No sport matches baseball’s passion for its past.”

You can reach Bob Watkins at