The 'one and not done' gang

College basketball’s new catchall “one-and-done” is code for show-me-the-money-now! by handlers of 18-year-old Kobe-wannabe’s who figure college is no more than seven months pretending to be a student until the birthday cake has 19 candles. It’s the world we live in.

But what about the sane side, One and not Done.

Consider Courtney Lee (age 23), Terrence Williams (22 this week), Earl Clark (21) and Jodie Meeks (20). Princes of special privilege the last three to four years, they traveled New York to Oahu to Anchorage, exhibitions in Caribbean countries, Miami and all points between. Enjoyed Planet Basketball in a universe twisted by Sonny Vaccaro and AAU coach profiteers as the plantation.

Vaccaro, who fancies himself a pied piping crusader for teens’ rights (if ‘he’ is 6-4-and-up and promises to wear whatever shoe he’s hustling this year). He farmed Brandon Jennings to Italy until he was 19 and plucked an 11th grader from Rick Pitino’s recruiting list, and will send him to Europe also. 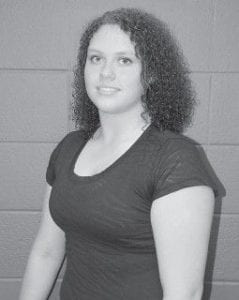 RISING TRACK STAR — Jenkins High School sophomore Blake Caudill finished seventh overall in the discus throw in the state track and field meets in Louisville last month. She also finished 12th overall in the shot put. Each event had 24 competitors from across the state competing. (Photo by Chris Anderson)

And, Lee demonstrated enough show time flare to get himself drafted by Orlando.

Success stories for a one-andnot done Kentucky collective whose names will be called at the NBA Draft Thursday night.

• Next, Edgar Sosa. University of Louisville’s clever and cocksure yapper was plagued early by too much solo and let space between his 18 year-old ears be clogged with one-and-done nonsense. He ignored Derrick Caracter’s no character and Rick Pitino’s real world warning: “grow up, kid!” Sosa believed by time his cake had 19 candles he would be matching moves with favorite player, Chris Paul in the NBA.

Reality is humbling for cocky teenagers. So, when the Cardinals line up for picture day in October, Sosa will be there in the front row. A senior who paid his dues. Pitino predicts a breakout season. If that happens Edgar Sosa can be poster boy for four-and-done.

• Next, Darius Miller. After an up and down year at Kentucky, the sophomore-to-be will begin his break-out in Auckland, New Zealand. Member of USA’s team for the Under-19 World Championships, July 2-12, Miller said last week, “I never thought I would be able to experience playing on a national team. I’m just happy to have a chance to represent our country.”

Indeed. Free trip to New Zealand, with friends, including fellow Kentuckian Shelvin Mack. A bonus never to be experienced by Vaccaro’s clientele. Man who dismisses such perks as plantation peanuts.

The specter of Lee, Williams, Clark, Meeks, Sosa and Miller brings us to John Wall and his coach.

• Mr. High School Everything, Wall will play for John Calipari at University of Kentucky-at- Euclid.

Question one: Will Wall be a Wildcat more than seven months?

Question two: Calipari, hailed Caesar at recruiting, winning, spinning, charming and lately tweeting, we wonder if he will earn incentive bonus money for growing John Wall between the ears? Persuade the kid on benefit of one-and-not-done exercised by Lee, Williams, Sosa, and even Clark’s and Meeks’ three years at college?

Calipari has a season to show us a ball coach can do something important as Pitino has done for Sosa.

In the Land of One-and- Done, can he persuade Wall to be a college sophomore?

Verbally committed to University Louisville, Justin Martin of Indianapolis Lawrence North decided he liked the recruiting attention and will shop himself anew. Since he de-committed to UofL, Martin said he’s heard nothing from Rick Pitino.

In 1991 Travis Ford left Missouri. Pitino offered a scholarship at Kentucky, Ford accepted but wanted to visit other schools first. Pitino said take it or leave it. Rest is history.

Bottom line? Justin Martin can shop. UofL will do likewise.

Luke Maile, a sturdy threetime Ninth Region player of the year at Covington Catholic is Kentucky Mr. Baseball ’09. A University of Kentucky signee hit .514 this season along with 12 homers, 55 RBIs and 56 runs scored.

Drafted by the Boston Red Sox in the 43rd round, Maile will weigh his options through the summer then decide on college or a signing bonus.

What will be University of Cincinnati’s strategy be for baby-sitting 6-7, 230-pound Chane Behanan since the basketball star committed to the Bearcats in the spring, but moved with family from Queen City to Bowling Green recently.

A top 25 rated recruit, juniorto be Behanan will play at Bowling Green High in the shadow of Western and coach Ken McDonald and barely a time zone away from UK and Louisville.

To keep tabs on Behanan, we wonder if coach Mick Cronin might use a strategy used by Leonard Hamilton when, as a UK assistant coach recruiting Sam Bowie, he rented a motel room in Lebanon, Pa. yearround to monitor Bowie. In his book Runnin’ Rebels , Jerry Tarkanian gave up recruiting Bowie to UNLV because “… all I know is Hamilton wasn’t using the room. Bowie was.”

And so it goes. You can reach Bob Watkins at sprtsinky@aol.com