‘Time may heal all wounds.
But time will steal you blind.
Time the wheel, time the conqueror.’

“… have you noticed lately how time flies?”

If you nodded yes, this space is for you. And Ted.

And for friends with whom you’ve lost touch since, say, Muhammad Ali was Cassius Clay, or the Cuban Missile Crisis.

Jackson Browne is right — Time does steal us blind.

This week, a mid-July day in Kentucky opens with a thrush chirp, a rooster report, and dew sparkles on the grass. But everything’s in a hurry. A new millennium morning seems to slide up to the noon-time siren at the local fire house then down the other side too quick. Somewhere between a rooster crow and fireflies, if a pleasant surprise or two comes along, it’s a fine day.

A letter maybe. An electronic one came last week. It traveled a fair distance, the other side of Kentucky, but in millennial terms, it made its way across half a century. A note from Ted. One that swept past Planet Baby Boomer, skipped time zones, ice storms and global warming and underscored Jackson Browne’s lyric, Time the Conqueror. 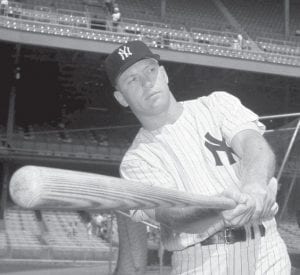 The late Mickey Mantle took a pre-game swing for the benefit of photographers at Yankee Stadium in 1961. Mantle’s mammoth swing and country-boy charm made him a larger-than-life hero to generations of fans. With attendance down this season, baseball is in bad need of players who had the lure of Mantle. (AP photo)

Ted’s e-mail skipped something else too, the traditional Dear Whatsisname and went straight to: “Trivia Time. I am the other half of the Brooklyn Dodgers Fan Club along with you,” it said. “We used to visit each other during Summer vacations.”

“We did some serious partying at my house while you were at St Camillus.”

I remembered. Curious isn’t it, how fogged up our memories are trying to recall last week’s top news story, but we can remember an umpire’s voice from four decades ago after looking at a third strike?

Thankfully, as time steals us blind, an e-mail from yesteryear can nudge us up and through a portal to cherished times when daylight savings time was, and a kid shouting “let’s play all day,” meant something.

An e-mail stirs images of old friends who will forever be 12- years-old.

Those of us blessed with wrinkles, thinned hair, and trifocals (and who remember the burn of a soft drink out of a frosty bottle on a July afternoon) know the value of attaching the word precious to our Passing Show.

Ted’s letter and a poll about Major League Baseball stirred memories of summers when the game of the day on radio made Gil Hodges seven feet tall, made Joey Amalfitano a name favorite, and the afternoon stretched all the way to Buffalo Bob’s “Hey kids! What time is it!?”

And kids never complained about the heat.

It brought to mind a couple of relics as well. Loyalty and nicknames, then and now.

Beyond Albert Pujols in St. Louis, Derek Jeter in New York and a handful of others, how many Major Leaguers in 2009 are loyal to the city they play in? Not many.

Where have magical nicknames gone? El Hombre is perfect for Pujols, but where are successors to Mickey, Willie and the Duke? Or, PeeWee, Whitey, Toothpick, Gus, Casey, Scooter and the Yog?

Anybody remember franchises linked to Moose, Maz, Goose, Lefty, Red, Jocko and the Penguin? Or, Sandy, Dusty, Junior, Preacher, Barber and the Bird? Or, Klu, Hammer, Killer, Country and the Kid?

Which brings us to a poll last week. An AP-Knowledge Networks study shows …

• Attendance this season is already down six percent. Why? Average price of a ticket is $26.64. Up five percent from last season.

• 15 percent of fans who attended a game last year said they likely won’t attend one this season.

How are fans feeling about Major Leaguers?

Two-thirds said Manny Ramirez, Barry Bonds, Sammy Sosa and Alex Rodriquez should not be eligible for the Hall of Fame if evidence proves they’ve taken steroids or performance-enhancing drugs.

Yet, on a sunny and long July day now-and-then, in our imaginations, we can savor grand moments past and echoes “Let’s play two,” meant something.

Meanwhile, Time does steal us blind.

Thanks for the e-mail, Ted. You can reach Bob Watkins at sprtsinky@aol.com