Opportunity knocks again for John Calipari, this time with the chance to show Kentucky fans he himself was once a kid.

The University of Kentucky basketball coach and his staff will reach out to Wildcat fans next month — sort of — with visits planned to four towns in four days for instructional day camps. Each session is three hours. Your child can attend for $75 each.

With a brutal economy, does America’s highest paid ball coach and winningest college ball program really need $75 per kid? A charge that eliminates many kids from the start.

Calipari should veto this mindless idea cooked up in UK athletic offices. It smacks of profiteering in the worst of times. I hope he has a Eureka moment, remembers being a kid in summer with two dimes to rub together. Maybe.

UK’s coaches should load up in taxpayer-paid UK vans, chip in and buy gas, stop along the way for baloney sandwiches, then meet kids and parents, sign autographs, give away a few tee-shirts and say thanks to loyal fans. 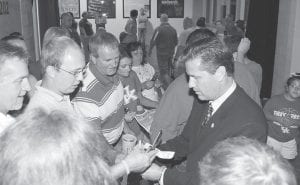 NEW COACH VISITS — University of Kentucky men’s basketball coach John Calipari was the keynote speaker at a Pike County Chamber of Commerce dinner at the Eastern Kentucky Expo Center in Pikeville on July 17, his first appearance in eastern Kentucky since being hired in March. (Photo by Chris Anderson)

End of the day, UK gets its PR fix and parents keep $75 to spend on school clothes and supplies.

Calipari will make this happen, won’t he?

University departments of athletics across America are eliminating scholarships, cutting programs and reducing travel expenses for athletic teams. Some, including Michigan, Ohio State and Wisconsin, are doing away with printed media guides.

The Associated Press reported last week: “State schools are facing budget reductions handed down by lawmakers while private schools’ endowments are shrinking. Both are dealing with dwindling contributions.

“It all runs counter to a culture of ever-more resources being devoted to college sports. In May, the Knight Commission on Intercollegiate Athletics said declining athletics revenues have been unable to keep up with a ‘runaway train of spending.'” 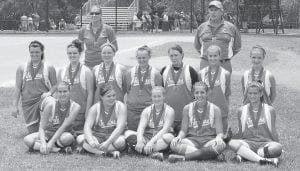 A sluggish economy apparently doesn’t apply at University of Louisville where its business as usual. Rick Pitino hired an assistant the other day. At $350,000, Ralph Willard is worth it, Pitino said. He isn’t.

No public statement from Tom Jurich or President James Ramsey on Pitino’s hire at a time when UofL is at financial odds on funding for Baptist East Hospital’s Multiple Sclerosis Center.

An assistant ball coach at 350 grand. Shame on Rick Pitino.

A reader wrote: If you were judge for Billy Clyde Gillispie versus University of Kentucky lawsuit, how would you see it?

First, it would be Court of Com- mon Sense held in the Commonwealth, not Texas.

Having brought the original suit, Gillispie must show evidence that UK fired him without probable cause. The University must prove he did not satisfy terms agreed upon.

First, show me the paper. A signed agreement has to be one somewhere.

Lee Todd and Mitch Barnhart can call it a Memorandum of Understanding, a Pollyanna Pay Package, or a paper napkin, whatever, if it’s signed by men of integrity (we assume) and if Gillispie cashed paychecks from UK bearing satisfactory numbers and paid income tax on those amounts, there is a valid agreement.

Answer: Yes. Being a tyrant with players and surly to reporters is not new, nor does it qualify as a contract breaker.

Common sense decision? A settlement. Billy Clyde gets $3 million and an airline ticket out of town.

Billy Clyde Gillispie has announced he will write a book about his life. The ex-Kentucky coach turns 50 in November. After friends and family around Graford, Texas purchase a copy, what target audience? Fans in Kentucky of course. Which brings us to a curious scenario – Gillispie doing a book tour around the Commonwealth during an epidemic of John Calipari fever.