Media chose Kentucky for the SEC East cellar. Sun Belt coaches picked the Hilltoppers for the basement. And, Louisville expectations in the Big East are less a hot topic than Steve Kragthorpe’s hot seat.

Low expectation is a blast furnace for fiery motivation speeches to stir pride of strong young men “… to prove those experts wrong.”

At Kentucky, fans aren’t buying predictions, but instead have bought every season ticket for seven home dates, student allotment included.

At Western, the Hilltoppers take another D-1 leap forward, opening in Knoxville as part of ESPN regional’s package beaming into as many as 60 million homes.

A fair showing would set the table for Western’s home opener against South Florida. A game that could set a new attendance standard for L.T. Smith Stadium. 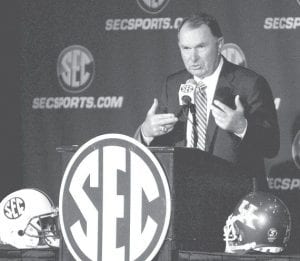 Kentucky football coach Rich Brooks spoke to the media during a news conference at the SEC Media Days in Hoover , Ala., last week. (AP Photo)

Footnote: South Florida assistant coach Steve Bird is a Corbin native and was an All-American at Eastern for legendary Roy Kidd.

At Louisville, Papa John Stadium has flowered to 60,000 seats. Even if home games are two degrees (Pitt and Rutgers) from being feeble, the Cards can save their coaches’ jobs with a seven in the left column. Seven wins would make Kragthorpe a genius again.

Rich Brooks takes no respect in stride. He knows, and we know, three winning seasons and bowl wins are progress and boost ticket sales, but it’s time to change goose eggs against Florida and Tennessee. And, South Carolina and Georgia “… still want Kentucky for homecoming.”

This season, UK’s coaches have a sprinkling of NFL prospects, more speed, more depth, a host of frisky newcomers and higher expectations for Brooks and 67,942 fans in Commonwealth Stadium.

Schedule, seven home dates, the season begins with the number four. A better than 50-50 chance to beat Miami, Louisville, Louisiana-Monroe and Eastern Kentucky. Then … The Wildcats will be favored over Mississippi State at home.

Who will be bowl-eligible victim No. 6? My guess is (at) Auburn. October 17. Here is the pivot game on which Kentucky season turns north toward Brooks’ goal or not.

Best case scenario — Kentucky finishes 8-4, is ranked in the Top 20 and goes bowling much farther south than Music City.

When the football Wildcats are introduced at halftime of a game at Rupp Arena before Christmas, Brooks may have asked fans rhetorically, “what better time to pass the baton to Joker Phillips?”

Kentucky quarterback Michael Hartline will have a break-out season … because Rich Brooks said as much. A nod from UK’s no-nonsense boss counts. Brooks says he expects his offense to be more like Andre Woodson-Era 2006 and 2007 than 2008.

Experience. The 6-6, 204- pound Junior knows upside and setback, having lost his starting job last season, then won it back. Hartline will be more patient and better recognition of secondary receivers running free. Ones he missed in 2008.

Protection. Three full-time starters on the offensive line return and four others have started as many as 15 games (Christian Johnson).

Balance. With a competent running game, Hartline has an impressive and relatively deep stable of receivers available staring with Randall Cobb and receivers out of the backfield.

Motivation. Understudy Will Fidler showed sparkles in the spring gam e to press Hartline, and two much touted freshmen are waiting for a chance. Keen competition is a master motivator.

No surprise, the Phil Steele.com list of coaches on hot seat for 2009 includes Louisville’s Steve Kragthorpe.

“… If Louisville is not in a bowl this year, the Cards will likely turn to someone else,” Steele says.

Who to write the book’s Forward? Rich Brooks, of course.

About John Calipari charging $75 per child for 3-hour day camps.

G. in E-town wrote: “… those kids who can’t go to a day camp because their parents can’t afford it, I still know, years later, what it was like when the circus came to our little town one year and my mother couldn’t afford to buy me a ticket. It hurts!”

Gold medal owner Darius Miller answered this question after the Under-19 World Championships: What does having a Team USA jersey mean to you?

“I think it will mean a lot. In fact, I already gave it to my mom and she’s supposed to get it framed already. I think she will hold on to it and display it in the house.”

Comment: After the last NBA check is cashed, a treasure all your life, kid.

And so it goes. You can reach bob Watkins at Sprtsinky@aol.com