An e-mailer asked recently, “What have been the worst coaching hires in Kentucky college sports?”

Here is one man’s opinion on the worst and best:

1. The hiring of Hal Mumme in 1997 was worst in UK’s history. Metro media fawned and overkilled (Air Raid) contributing to a dupe job that began when Mumme tossed starting quarterback Billy Jack Haskins under the bus then rode Tim Couch-to-Craig Yeast to one winning season in four years and landed UK on NCAA probation … again.

2. Charlie Bradshaw, 1962. Trying to be Bear Bryant II was like Gerry Faust, Bob Davie and Charlie Weis trying to be Ara Parseghian. Was a fool’s errand. By standards today, Bradshaw could’ve been prosecuted for assault.

1. Billy Clyde Gillispie put in charge of Kentucky hoops was like hiring Jethro Bodine to run General Motors. A rushed, desperation hire that should be tattooed in Olde English on Mitch Barnhart’s performance report, “Botched.” 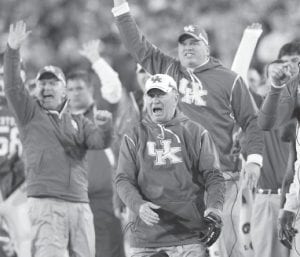 Kentucky coach Rich Brooks, front, reacted during the second half of UK’s game against Tennessee in Lexington on Nov. 28. (AP Photo/Ed Reinke)

2. Eddie Sutton reminded me of crooner Jimmy Dean’s line “you can’t roller skate in a buffalo herd.” He couldn’t. UK fans expected success, but not a Hank Iba-inspired conservative who believed winning with Norman Dale’s (Hoosiers) seven passes offense would be enough.

Eastern Kentucky University. Roy Kidd. There was a constituency he should have been offered the job at Kentucky in 1969 instead of John Ray, Fran Curci in 1973, then Bill Curry in 1990.

UK athletics officialdom sniffed at even considering Kidd until it was too late.

In fact, EKU’s man coached where he was most needed, most effective and most appreciated. He built Colonels football into a power, had a sterling career that led the Hall of Fame. Kidd’s legacy: Success is about more than money or Big Blue fame.

Western Kentucky basketball. Ed Diddle is founding father of Hilltopperism and a red towel that morphed into a Big Red. Diddle was a blend of Will Rogers, William Archibald Spooner (Spoonerisms) and Abe Lemons. Re: wisdom couched in humor, re-invent the language, and enjoy the wins – see clearly where Life Is Good.

University of Kentucky football. Rich Brooks, despite a succession of directors of athletics who botched this hire. In part because all had basketball backgrounds.

Brooks is my pick over Paul Bryant because, as advances on the field came slowly because of NCAA probation, Brooks remained steadfast despite critics and middle-of-SEC pay package. But mostly because of his impeccable character and discipline.

University of Louisville football. Howard Schnellenberger. His decade at UofL was about more than 54 coaching wins compared to Frank Camp’s 118. More than any coach in the state, Schnellenberger made fans and players believe they could fly with eagles Alabama, Ohio State and others. And the Cardinals did.

Western Kentucky University football. An argument can be made, Jimmy Feix over Nick Denes. My choice is Feix.

One south Florida high school coach told a local reporter last week, “(Willie) reminds me a lot of Tony Dungy. He doesn’t get overbearing. He has a great attitude, listens to people and has spent a lot of time around knowledgeable coaches. He is a young guy who knows how to do it right.”

University of Kentucky basketball. Rick Pitino. Rarely in college sports do we witness a comet pass. This was it, a national story. Americana.

Pitino came reluctantly, brought personality and embraced precious present philosophy that mesmerized a fan base and a collection of unlikelies who became a perfect story of Unforgettables.

Miami brought a scare with VMI-incredible 3-point accuracy and provided a hero swisher situation for John Wall at the end.

Calipari’s team is 7-0 and 1,995 wins with North Carolina coming to Rupp Saturday.

JEERS. Louisville director of athletics Tom Jurich told media last week that Steve Kragthorpe was a bad hire after his first game. Say what? Cheap shot after the coach is out the door. Jurich should be reprimanded.

West Jessamine High posted a 9-3 football season and coach Randy Wood resigned two years into the job. “I really didn’t want the job when I took it, but they talked me into it,” Wood told The
Lexington Herald-Leader.
“And, even thought we were winning this year, I didn’t really enjoy it.”

And so it goes. You may reach Bob Watkins at
sprtsinky@aol.com