Wildcats come a long way in just one year

From nowhere last year to New Orleans this week. From the outer reaches (NIT) to core group (NCAA No. 1 seed), that’s Kentucky. The Wildcats earned the school’s 50th trip to the Big Dance this week and Big Blue Nation expects its team to be dancing to Syracuse on the way to Indianapolis. Anything short of Indy will be like a visit from Santa Claus with an empty sack.

Meanwhile, Louisville will hope for a waltz against California to earn a fox trot with Duke in Jacksonville. And, in a sign of no respect for fan bases, Murray State dances with Vanderbilt in San Jose, California.

In baseball parlance, the “sweet spot” is a place on a bat where tape measure home runs are born. In the Bluegrass, a “sweet spot” is the demolition of Tennessee. Not a one-point thriller, but a shellacking that causes a quake felt from Whitesburg to Paducah and on to Covington, maybe even in Louisville — a kind of get-even for football where Uncle Vol has been Yo Daddy to Kentucky since BC. Before Cuz (was born). 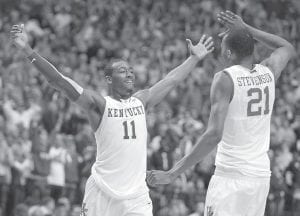 Kentucky freshman John Wall (11) and senior Perry Stevenson celebrated after the Wildcats came from behind to defeat Mississippi State University in the championship game of the SEC Tournament in Nashville. (AP photo)

John Wall’s team put a bruise on the Vols last Saturday that, it can be argued, was the sweet spot in a 30-plus win season, and counting. Tennessee managed 45 points, one field goal the last nineplus minutes, was out-rebounded 44-29, and Scotty Hopson disappeared. Demolition.

The Wildcats’ win over Tennessee wasn’t perfect, but certainly flirted with it.

Carving the 29-point margin was at times surgical, at times dazzling team play, and always led by maestro Wall who ran the game like a master chef at a Hollywood eatery at dinner rush hour. Precise, unrushed, sliced, diced and here comes dessert.

Tennessee tried clock management, bravado, lots of yap, and cheap shots born of frustration, but got as good as it gave. This week, Uncle Vol heads into the NCAA’s with a jumbo headache and 16-wheeler tracks across its collective face.

When spring football practice comes, Big Blue Nation can recall its “sweet spot” win in Nashville — one that made the earth move.

Last week, in the Big Ten Tournament, Michigan coach John Beilein opted for the Rick Pitino strategy (1992 versus Duke) of not guarding the inbounds passer. Result: Down by two, Ohio State’s Evan Turner took an uncontested pass, dribbled over the center line and let go from 37 feet. Swish! A 69-68 win.

This week, Rogers’ shot is one of 16 best in history, says ESPN’s SportsNation.

Fans can choose the winner by logging onto espn.go.com/ sportsnation/buzzerbeaters and voting for each of the eight first round match-ups.

The essence of Luther Vandross’s “One Shining Moment,” Rogers’ shot is seeded seventh opposite against Bryce Drew’s (Valparaiso) game winner over Ole Miss in 1998.

SEC Coach Of Year
SEC coach of the year selected by coaches is Vanderbilt’s Kevin Stallings. While absolutely a snub of Kentucky’s John Calipari, it can be argued that Stallings deserved the honor, guiding his no-McDonalds All-American Commodores to another stellar season and the Big Dance. But more, it could be a reward that transcends the 94-feet play box. Two reasons:

1. Last summer Stallings asked that a bonus due him be used to finance his team’s trip to Australia that was about to be cancelled for lack of funding.

2. During his decade coaching in Nashville, 26 seniors who played for Stallings have earned a college diploma or are currently working toward one.

Winners With A Twist

When Minnesota upset Michigan State then Purdue last weekend it marked coach Tubby Smith’s 16th consecutive 20-win season. Two at Georgia, 10 at Kentucky and four with the Gophers. A peculiarity that still dogs Dr. Orlando Smith’s programs: Where are the big time recruits?

Winningest in the SEC? Billy Donovan’s Florida teams have 12 straight 20-win seasons. A peculiarity critics like to mention – in games decided by six-or-fewer points, Donovan’s record is 55 wins, 66 losses.

For Mississippi State coach Rick Stansbury mid-February to mid-March 2010 had to be the nightmare month of his professional life.

On Feb. 16 in Starkville, Kentucky came from five points behind in the last minute to tie then beat Bulldogs in overtime. On March 14, Kentucky overcame a five point deficit with a put-back at one-tenth of one second to tie. During the rally a John Wall hustle play sent Stansbury sprawling on his back.

Two excruciating overtime losses to UK for State’s coach who played at Meade County High and Campbellsville College. Three hours later, the Bulldogs learned they were left out of the NCAAs. We’re guessing State missed the cut by one-tenth of one second — DeMarcus Cousins’ tip-in.

For Stansbury and the ‘Dogs, Black Sunday.