Eric Bledsoe is no longer a rookie. Last Saturday in New Orleans, Kentucky’s other guard
spotted a crack of daylight between Wake Forest defenders and went for it. He had to know “thug boy” Chas McFarland was lurking somewhere, but Bledsoe took a hop, skip and flew anyway. Dunk!

Al-Farouq Aminu and others dressed in black had to wonder, “What was that? Of all the nerve, that little guy bringing that stuff in here!”

Audacity is what grows at Kentucky during time and space, Big Blue Madness and the march through March.

“Chef” John Calipari’s recipe for success was created, we think, from a jumbo cup of skill, a tablespoon of smarts, teaspoon of nerve, a pinch of toughness … all left to simmer awhile. Then, stirred to a boil by Senior Day, a man who talks like a Smothers brother, says, “Just land the plane. We just want to land the plane.” 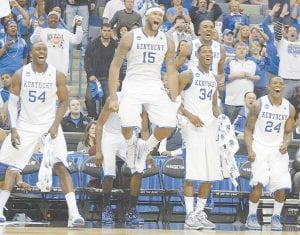 Last Thursday-Saturday, Kentucky basketball was as pretty as Ashley Judd’s dimple — play that was silky fine, tough as a sow’s ear, audacious and great fun for Big Blue Nation. What made it gorgeous? Forty-eight assists. East Tennessee State was bewildered eight minutes in, Wake Forest by halftime.

So, as Kansas disappeared, ditto for Villanova, if the NCAA’s opening rounds were a beauty contest, first runner-up would be Cornell, with Miss Congeniality going to Duke and the big bouquet belonging to Kentucky.

But that’s getting ahead of ourselves. A few big dogs have gone home, but this Sweet 16 has star power enough to stir UK fans to a boil again and CBS ratings numbers big enough to fill Dick Vitale’s mouth. Maybe. 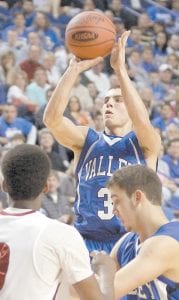 Shelby Valley High School’s Elisha Justice (3) may become the state’s first Mr. Basektball from Pike County since Virgie’s Todd May in 1982. Justice is shown above shooting over teammate Taylor Newsome, right, and Ballard’s Devante Parker after Shelby Valley’s 73-61 win in the championship game of the KHSAA Boys’ Sweet 16 Basketball Tournament at Rupp Arena in Lexington on Saturday. Justice scored 17 points in the final and was named Tourney MVP. (AP photo)

1.
Nickname for these Kentucky Wildcats? A fan in Henderson cleverly proposed Patrick’s Pups.

2. Murray State came within a whisker of another “One Shining Moment.” The Racers’ success had to warm the hearts of three men who did much to pave the way — former coach Cal Luther and players Bennie Purcell and Howard Crittenden, who have their jersey numbers in the rafters.

3. Next for Murray? Ward off $uitors wanting a date with fourthyear coach Billy Kennedy, whose Racers won 16, 18, 19 then a record 31 this season.

4. Next best thing for college hoops? Horseshoe configuration in the lane to reduce block-charge miscalls and flops.

5. After seeing a gazillion games this winter, one man’s opinion on quality of college basketball officiating 2009-10: Fair to poor. Reasons: Players are faster, stronger, rougher. Officials can’t keep up and can’t or won’t stop trash talk by the players.

6. Pearl-Tyndall amendment. NCAA rules committee should review the Coach’s Box rule, which is being ignored by officials. Note to coaches at Tennessee and Morehead State: Television camera directors in the truck may think you’re entertainers, but fans pay to see players play. Stay in the box!

7. Adolph Rupp Trophy. John Calipari and John Wall are Adolph Rupp Cup and Adolph Rupp Trophy winners, honoring national coach and player of the year. First time in the 38-year history of the award that a Kentucky coach or player has won a Rupp Award, and first time recipients came from the same school.

• First time a Pike County school has won the crown.

• First team named Wildcats ever to own a big trophy in Rupp Arena’s beyond the arena’s prime occupant.

• First time in three decades plus a team named Wildcats won the crown. In 1976 Edmonson County’s Wildcats marched out of west-central Kentucky to win a title in Louisville.

• If Elisha Justice is named Mr. Basketball, which should happen, he would be Pike’s first since Virgie’s Todd May, 1982. Shelby Valley was created by the merging of Virgie and Dorton high schools.

You may reach Bob Watkins