Wall is best of all ‘one-and-done’ players News & Views

Flash, flair and fun — John Wall’s game came in Technicolor with a Wow! factor and Kentucky fans loved it all and embraced the kid who brought it.

Even at one and done he was the best. Good-bye, Johnny Ballgame.

• Mashburn and Mercer, was right time to move on.

• Rondo was an NBA player before he got to Lexington.

Wall determined to play error free, play unselfish and lead. He kept chest-bumps and strut to a minimum, rarely whined at a blown call and stepped away after hard fouls. 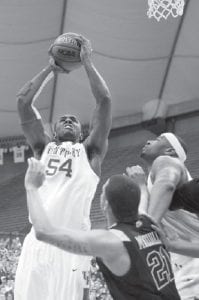 Kentucky’s Patrick Patterson (54) shot over West Virginia’s Joe Mazzulla (21) in the NCAA Tournament during what was to be Patterson’s final game with UK. (AP Photo)

The most fiercely anti-UK fan marveled at his play.

So, Wall’s place in UK’s pantheon of hoops stars is bronzed. Tops any Leave-Early list.

When University of Kentucky raises jersey No. 54 into Rupp Arena’s rafters, Patrick Patterson will stand at center court in an expensive three-piece suit and do the Y thing. The ovation cascading down could bring Patterson to tears again.

Men of grace, achievement and class who understood playing for the name on one’s chest is more than a hokey afterthought.

VIEW. Maybe it should’ve been a three-game series.

NEWS. Louisville’s Samardo Samuels put his name into the 63-and-counting NBA draft traffi c jam. His coach vowed to help Samuels make the right decision before the May 8 deadline.

VIEW. So, we can be reasonably sure Rick Pitino will tell Samuels, “… stick around, big guy, next draft will be better.” Right?

NEWS. Despite projection as a second round draft pick, Morehead State junior Kenneth Faried added his name to the underclassmen list also. Coach Don Tyndall said, “No one will encourage (Faried) to leave more than I.”

VIEW. Baloney! Faried should seek advice from a straightlaced math professor to explain how dividing 60-something into 30-something (first round slots) doesn’t compute. Stay in school, kid.

NEWS. Butler University coach and hottest celeb Brad Stevens will throw out the first pitch at a Chicago Cubs game May 10 and sing ‘Take Me Out to the Ballgame’ at Wrigley Field.

VIEW. If BU’s coach stood alongside say, shortstop Ryan Theriot, someone would wonder, “is that Theriot’s kid brother?”

NEWS. 68, not 96, is new number of teams invited to the NCAA men’s Big Dance next year.

Louisville or Kentucky? Marquis Teague’s college choice was the hold-your-breath headliner last week. The 6-2 Indianapolis senior-to-be had all but committed to UofL, changed his mind and left us to wonder …

1. Best player in the Hoosier state and tug of war for Teague did not include talent-starved Indiana University?

Two weeks ago the University of Kentucky raised football ticket prices and hiked the licensed fee to buy them. Last week, an increase to park.

For seven home dates, a $100 increase to $275 to park in blue, purple, orange, green and red lots at Commonwealth Stadium.

Sports Information Director for football Tony Neely said in an email, “We have a very long waiting list for parking passes and believe we will sell all available spaces.”

UK officials hasten to remind fans that ticket prices are higher at other SEC schools.

Savvy fans know UK is still not on par with Florida, Tennessee, Alabama, or South Carolina, which means price hikes for ticket and parking price hikes are outrageous.

If Lee Todd and Mitch Barnhart have a place at all in University of Kentucky history it’s only resemblance to higher education will be they were in charge during a Flagship U. era of sell-out to sports and marketing profiteers.

About Duke’s basketball coach, Sporting News
columnist John Feinstein writes: “Whether his latest champion is the least talented of (Mike) Krzyzewski’s Final Four teams doesn’t matter. This was a group that reflected its coach: tough, smart, driven and consistently able to get better.”