Walk-ons have ‘right stuff ’ to make it at UK, UofL

We do love winners. Double when an underdog rises above projections of dot.com experts. Come October, pole-opposite to one-and-done-ism will be the story line about Jason Polson and Elisha Justice.

Kentucky-breds from small towns with all-state credentials, all-star uniforms in common, and a passion for the sting of battle that only Kentucky folk and Hoosiers fully understand. Both declined college scholarship off ers, choosing to walk on at Kentucky and Louisville, respectively.

Here comes the right stuff . Polson and Justice are bold enough, confident enough and feisty enough to risk a run with dot. com big dogs whose conversations include next level jabber, the color green and puzzlement at those who “follow my dream.” 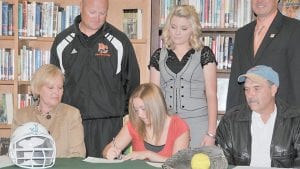 CONTINUING THEIR CAREERS — Jenkins Lady Cavaliers softball player Emily Walker and volleyball player Lauren Sparks have signed college scholarship off ers with Pikeville College. In the photo at left, Walker inks her off er while her father, Joe Walker (front right), of McRoberts, and mother, Pam, look on. In photo at right, Sparks signs her scholarship off er while a smiling Pikeville volleyball coach Anna Bevins watches. (Photos by Chris Anderson)

What risk? Polson and Justice will pay tuition, books and all else to sit the bench. Ground zero. Yet, hunch here is both will be 10 per cent better at Kentucky and Louisville than anywhere else.

“This has been my dream since I was a little kid,” Polson said at West Jessamine High the other day. His remark twanged the heartstrings of big and little kids in 120 counties with the same dream.

Justice’s decision for Louisville showed us resolve and planning. Having said yes to Rick Pitino, Mr. Basketball kept to it when a phone call came from Lexington. A role model-worthy commitment.

“Louisville is the right fit for me,” he said, prompting us to spin ahead 10 years and see Justice called “another Pitino protege` coach.”

Ready then for the sting of battle at Kentucky, at Louisville, Polson and Justice. Kentucky kids set to chase their dreams while you watch and glory in it too. 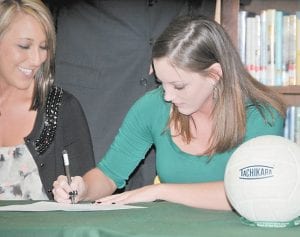 Like many naturalized Kentuckians before and since, Mike Pratt came to UK from Dayton in 1966. Scored 1,359 points in three seasons for Adolph Rupp teams that won 71 of 83 games (1968-70). After professional ball then college coaching, he returned to make the Bluegrass State home. Last week Pratt was inducted into the Kentucky Athletic Hall of Fame.

Before his induction, Pratt was asked by a reporter in Dayton about his old coach.

“Adolph Rupp was very intense, very demanding,” he said. “I know a lot of people thought he didn’t care about anything but basketball, but he was always into his players earning their degree. He had way more successful doctors and lawyers than he had successful basketball players”

Pratt’s tribute to elite to make a point is understandable. In fact, Rupp’s approach spawned successes over a far broader landscape – coaches at every level, ministers, farmers, pharmacists, businessmen and bankers and arguably most important of all, educators.

Comment: Ironically, Rupp’s legacy has become a novel idea in 2010 — a ball coach interested in student-athletes working toward a college degree.

• Decision Time. Thursday is a hoops deadline fans around Kentucky will watch with interest.

Eric Bledsoe and Daniel Orton at Kentucky, Louisville’s Samardo Samuels and Kenneth Faried must leave in or remove their names from consideration for the NBA draft in June.

Among Rivals.com projections of 10 college players who face the toughest decision includes Bledsoe and Orton.

• Off to China. Four Kentucky collegians are going to China next week as part of a Sports Reachsponsored basketball team representing the U.S. Josh Harrellson and Jon Hood from Kentucky, Peyton Siva of Louisville and Steffphon Pettigrew of Western Kentucky are on a roster put together by Robby Spears of Campbellsville. A nine game tour May 14-31.

• Honor Rollers. The SEC issued its academic honor roll for student-athletes for the winter semester last week. Alabama was first with 56, Florida 53, Georgia 42 and Kentucky 41.

Harper’s Big 3-0 Ray Harper, assistant at Western Kentucky, has been selected to Kentucky Wesleyan College’s All-Century team. His inclusion among 30 chosen is no surprise. Harper’s name has been a recipe for winning at every stop.

It began with big scoring nights at home town Bremen High in Muhlenberg County which got him a scholarship to Texas.

Next for Harper? Kentucky’s Athletic Hall of Fame?

And so it goes. You can reach Bob Watkins at Sprtsinky@aol.com