In an era of tacky titles (the King, the Answer, the Wall, etc.), Turpin was The Affable One. Large man with big kid inside. Man of luminous smile and boyish innocence. Turpin’s passing bought to mind . . .

• “Smiles form the channel for a future tear,” Lord Byron wrote. Behind his smile, Mel Turpin had to be crying. That he took his life suggests a dreadful loneliness and evidence that his place far from the madding crowd was too much to bear. That his old teammates and University of Kentucky basketball failed to recognized his smile was a channel to tears, makes it all the more tragic. 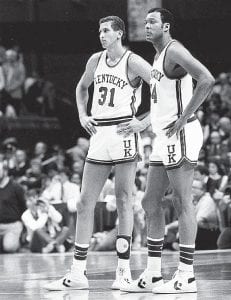 Kentucky basketball players Sam Bowie, left, and Melvin Turpin waited during a break in a game against Indiana at Rupp Arena in Lexington in December 1983. Turpin, a former NBA player an All-American Kentucky center, committed suicide July 8. He was 49. (AP Photo/Lexington Herald-Leader)

And, we wonder about impact on The Affable One when every time he drew media mention for time at Kentucky and NBA it came in some form of “ … never lived up to NBA expectations.” Had to haunt him.

• UK’s list of centers, called 5’s today, is long and illustrious by any standard. From Cliff Hagan and Dan Issel in the Naismith Hall of Fame, to seven consensus All-American centers, the list includes Turpin. Teammate Sam Bowie was a media favorite and quote machine, but Turpin was the better player and, in the end, too much ignored.

So, summer 2010, 26 years after cheers of approval inside Rupp Arena, Melvin Turpin will start to be forgotten. Sadly, he believed he already had been.

Hereafter, the toast of Miami likely prefers Maya Angelou’s peculiar version anyway. “You can never go home again, but the truth is you can never leave home, so it’s all right.”

Rage from Cleveland at Jamesthe Betrayer is a reminder: Be cautious who you fall in love with. Professional sports in America, particularly the NBA, is less Love Street (The Doors) and more Wall Street where greed-is-good, ego gratification is prime, fans are irrelevant and marketing is everything else. Hardly the place to invest loyalty.

For fans this side of the Ohio River, thankfully there are only two professional franchises to fret over and their affiliation with the NBA is in form of the farm for free agents.

James’s mistake is a life lesson — that which dazzles is often fool’s gold.

His is the wealth of a thousand Saudi princes, influence worthy of a Forbes listing. And proof that he lost the meaning.

When/if the Miami Heat wins an NBA crown and James has his jawbreaker championship ring for the safety deposit box, then what? Who will care?

Today, James’s image in Miami is celebrated as a Second Coming (after Pat Riley), but everywhere else it’s a shrug, except in Cleveland where he is now Judas Iscariot.

With deference to Brandon Knight, the search for John Wall II is officially under way. The Lexington Herald-Leader introduced Kentuckians to Rodney Purvis last week. A high school sophomoreto be in Raleigh, N.C., Purvis said in an interview he is humbled to be compared to Johnny Ballgame, has never beaten him one-on-one and has not received an off er from University of Kentucky, but . . .

“If you want to be one and done, then Kentucky is the place to go. It’s that simple.”

This is the legacy for a top-20 university wanna-be?

NEWS. Dr. Jim Kovach, alltime leading tackler 1974-78 at University of Kentucky then leading tackler for the New Orleans Saints 1981-84, was inducted into the Academic All-America Hall of Fame last week.

VIEW. One of life’s winners, Patterson is on his way. He will be back.

NEWS. Western Kentucky’s football home opener with Indiana will be televised live on the Big Ten Network Sept. 18. The Hilltoppers are promoting the game as a Red Out — WKU fans encouraged to wear Hilltopper red.

VIEW. With the nation’s longest losing streak likely to be 22 after visits to Nebraska and Kentucky, we hope Western puts a big red on IU’s Crimson and Cream in front of a Big Ten Network teevee audience.

Becoming familiar on college hoops recruiting lists this summer is a 6-9 forward at Eric Community College in Buff alo, N.Y. God’s Gift Achiuwa is son of a Nigerian minister who told Rivals.com his son’s name is a reflection of the depth of his family’s religious beliefs.

Academically, Achiuwa had a 4.0 GPA in the fall, 3.8 in the spring. Programs interested in recruiting him include Kansas, Pittsburgh, St. John’s and Tennessee.