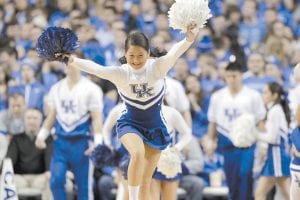 Sports journalism around University of Kentucky athletics has become nothing but a pep rally, observes longtime columnist Bob Watkins, with the team’s cheerleading squad, shown here in action at the UK-Tennessee game Saturday, being about the only thing missing. (AP photo)

Never, never be afraid to do what’s right, especially if wellbeing of a person or animal is at stake.

Society’s punishments are small compared to wounds we inflict on our soul when we look the other way. — Martin Luther King Jr.

Dr. King’s words resonate still. And, all the way to my profession.

Sportswriters and broadcasters today have become fans, competing with bloggers and Eye Candy holding forth at ESPN. Dance tune? Money. Who has it, who’s demanding more, who’s the next kid who’s going to get it and how soon? Education be damned and ball coaches shop for bigger jobs. Short of a now-and-then Who’s Your Daddy from Sports Illustrated in 1999 and an occasional 30 for 30 on ESPN, talking heads are cool and imitation-worthy for local markets.

Last week, the word Omaha became the rage. Peyton Manning used the word in line-ofscrimmage cadence 31 times against the Patriots. Everyone was impressed. Word out of Manning’s mouth raised $24,800 for his foundation. Noble undertaking, but a Pandora’s Box precedent. 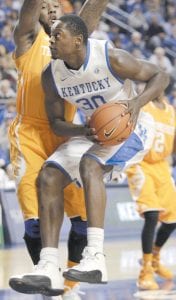 What do fans think? Well, business is business, man. Just look the other way.

Closer to home in Kentucky …

Coaches. Believed-to-be honorable men, affix their names to five-six year contracts, then bolt for more money and higher place on the pole. Many sports media stand admiring the ballet which is Process — guesses, clandestine meetings, rumors, flirtations, then blanket denials, then presto: A ball coach introductory press conference. The speed of Process is a fascination.

Charlie Strong, one year into an eight-year contract, left. Story line? Louisville’s Tom Jurich became media darling for his skill and daring to rob a serial job jumper from another school.

Contract? What contract? Strong and Bobby Petrino neither answered to his fans (in Louisville or Bowling Green).

The job jump at Louisville was shamefully arrogant, but not exceptional. More shameful was that media marveled at $trong’s the Jurich’s process; then a Biblical spin — prodigal-son-come-home, accorded Petrino. His contrition was redemptive enough to look the other way.

On Strong’s blatant defection and Petrino’s rehabilitation, UofL President James Ramsey deferred to tail that wags this dog, Jurich. And why not, man’s a maestro with spin.

Fans? Those who buy tickets deserved a report on Strong’s penalty pay, how much and when UofL is compensated and what happens to the money. And details on Petrino’s deal, incentives to behave.

Petrino and Western? Likelihood of this ball coach facing Hilltopper fans being accountable on principle were laughably remote.

From talk shows on in, sports journalism around University of Kentucky is pep rally and dogand pony show (UK officials call it Media Opportunity). Questions? I no longer attend, but from transcripts I see, they range from “Hey Cal, how good do you feel about Julius’s cramp issues?” to “Cal, is this team improving to your expectations?”

Maybe fans might like to know: “How was it Arkansas was able to make a team infinitely more talented play at (coach) Mike Anderson’s tempo?” or “ Isn’t blocking out on perimeter shots a fundamental kids (in Kentucky) learn in junior high?”

With few exceptions, media around UK are openly fraternal with our pal Cal.

Fans? What about ‘em? Business is business, man. Just look the other way.

NEWS. Richie Farmer begins his 27 months in prison for “sense of entitlement” guilty plea in March.

VIEW. If he serves full term, Farmer will be near 48 when he leaves prison. Prime of life to make a new one. I wish him well. Maybe a book contract to help pay debts. But more important by a Cawood Ledford mile, reconciliation with his three children.

VIEW. In fact, the number of phantom calls have increased.

VIEW II. The referee story was accompanied by a photo (USATSI) for the ages. Find it. From the Kentucky at Arkansas game, referee Roger Ayers is getting an in-your-face plea from John Calipari. Kentucky’s coach should have this one hanging in his office.

NEWS. Northwestern did what in Bloomington last Saturday?

VIEW. Here come those Wildcats! Now, if we can just get Vanderbilt on a roll.

VIEW. Best part was reaction of EKU guard Corey Walden following the game: “That was the most fun I’ve had in a game in my life,” he told reporters.

Comment: When’s last time a player at Kentucky or Louisville said as much?

VIEW. My candidate for college newcomer of year in Kentucky, Chris Harrison- Docks is a hard-nosed and gritty kid can’t shoot like his dad did at Tollesboro, but he’s got game and is an excellent fit. A freshman, Harrison-Docks is another “who knew” kid who should have signed at Western Kentucky, instead of Butler, in the first place.

An underclassman playing himself onto this list or another year in college? Willie Cauley- Stein at Kentucky.

Following Eastern Kentucky’s win over Belmont last week, guard Corey Walden said: “That was the most fun I’ve had in a game in my life.”