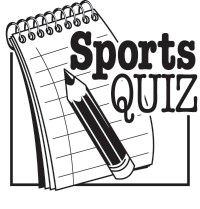 1. When was the last time before 2006-07 (Oregon State and North Carolina) that the same teams met up two years in a row for the title at the College World Series?

2. Which of the two famed strikeout artists, Bob Feller or Nolan Ryan, had more seasons of giving up 200-plus walks?

3. Name the youngest pair of quarterbacks to start in a Super Bowl.

4. Of the seven NCAA men’s basketball champs who finished a perfect season by winning the NCAA Tournament, how many were coached by UCLA’s John Wooden?

5. When was the last time a Chicago Blackhawks player led the NHL in scoring for a season?

6. Who was the last NASCAR driver before Michael Waltrip (2001) to record his first career Cup victory at the Daytona 500?

7. Jimmy Connors holds the record for most singles tournaments won by a male tennis player with 109. Who is second at 94?