Spring and summer go so fast 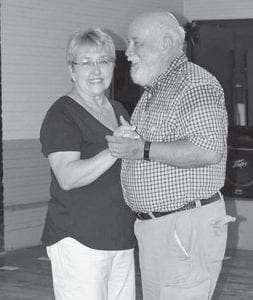 Mike and Marcia Caudill are pictured in a dance.

Hello everyone, how’s everything your way? I hope everyone is enjoying their summer, along with all the fresh produce this time of year brings.

Can you believe we are already into August? Readers, we are facing the cold winter months much too fast for me. As I sat on the deck you could sense the feel of fall in the air. Once again I am not looking forward to the ice and snow, and to me it seems spring and summer goes so fast and the winter months are so long.

I feel like I have missed something very important that I was really looking forward to, as there was no bluegrass festival at Kingscreek Park this year. I tried in vain to reach Bill Meade. Last year was a much smaller crowd than the year before, so maybe that was the reason.

For all of you who like music, please attend Campbell’s Branch Community Center on Friday nights and Carcassonne Community Center the second Saturday of each month. Sunrise Ridge will be at Campbell’s Branch Friday night. There’s always food available. August 11, from 6 to 9 p.m., Sunrise Ridge is the featured band Come hungry as there’s always plenty of good food. Now you know I would love to be there 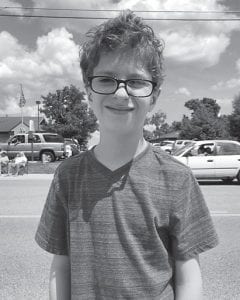 Bennie Wiederhold recently enjoyed a parade and a movie.

Dean Osborne’s Festival at Hyden is this weekend, and there’s a great lineup, including Sunrise Ridge on Saturday. Sunrise Ridge has a busy schedule.

As much as I love to visit the mountains that I still call home it is always good to get back to the flatlands.

My little sidekick Bennie Wiederhold sure enjoyed the weekend. Bennie is very good at drawing, and he has a favorite artist and author, Steve Harpster, who has made several appearances at libraries. A year ago I called the local library in Harrison asking about getting Mr. Harpster booked here.

I had to go to the library to check on something, and I casually mentioned that Steve Harpster had once again appeared at Green Township Library, and that I had called the Harrison Branch and couldn’t understand why this couldn’t take place. I was informed that Steve Harpster was booked for Friday, and the list was filled. They did have a waiting list and Angie was called, and Bennie was ecstatic that he could go

Friday evening, Angie and Bennie went to the Harrison Community Center as it was the last Friday night for free movies. “Coco” was the featured movie. Bennie told Angie that was the best movie he has ever seen.

Saturday, Johnny and Ann Calihan’s daughter Sue Wagner, Angie, and Bennie all spent the afternoon at Bright, Ind.’s Firemen’s Festival, which is just up the road from where I live. Sue had taken a bad fall and really wasn’t able to do this and Angie wasn’t up to par, but still they managed to spend the day together with Bennie to see the parade and enjoy everything that goes with it.

This is the first time that Bennie has been close to a parade. Thanks, Sue Wagner, for making this happen.

Bennie starts junior high school in August. I don’t know how parents with multiple children can afford to send their children to school. Angie has to pay almost $200 for school fees before Bennie can start school.

Les and Pat Wagner are doing pretty good. They were able to go to Haddix Hall to see Tony Hale and Blackwater Band. That’s the first time in almost a year they have been able to go.

They are having half runner green beans, and actually they are the only ones locally that I’ve seen. I stopped at a produce stand and the half runners looked like they were half bad, so I said no thanks, I’m not paying three dollars a pound for something that looks like that.

Guess I won’t be cooking green beans this year. So far I haven’t seen any homegrown tomatoes.

Belated happy birthday to my granddaughter Sarah Nottingham who turned 20 on July 29. I spent about an hour with my daughter Anna, her husband Scott, Jessica, Katelyn and Kyle while waiting for Sarah to come. I was invited to go to dinner with the family, but I wasn’t feeling too good so I declined.

Johnny and Ann Calihan are still enjoying having their daughter Sue Wagner being home with them. The preemies are finally both home. One is still on oxygen, so please keep these darling babies in your prayers.

As usual I am running late getting the column out, so until next time, Rose Ballard, 9110 Lawrenceburg Rd., Harrison, Ohio 45030, email Bluegrassmama4@aol.com.