Spring is showing all its colors 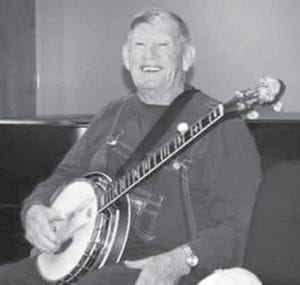 Lee Sexton celebrated his 90th birthday on March 24. He has taught many people to pick the banjo including Jack Adams, who says Mr. Sexton is his hero.

Hello everyone! How my heart, soul, and feet are wanting to get in my car and head to the mountains! Spring is coming alive in this area, as the white color of the Bradford pear is starting to show its beauty.

The yellow forsythia is so breathtaking from a distance, and even more beautiful when you get close.

There are several magnolia trees that are in full bloom, and even the weeping willows are showing their magnificent long cascading branches of green.

Daffodils are in full bloom, and I have seen just a few hyacinths showing their pastel colors. I love the smell of these.

As I walk through the yard, there’s a mini blue flower that is peeking through the grass. I really hate to walk as I know it will crush the blooms.

Even though I appreciate and enjoy spring so much each year as it seems God awakes a huge Easter basket with all the magnificent colors. It seems as if this year has a special meaning.

Readers, I don’t know about you, but it seems that one day I was going about my usual routine, then the next day our world is turned upside down, crossways and spinning all at once.

Honestly, my brain is having somewhat of a difficult time to comprehend everything that is going on.

Thank goodness I listened to my daughter Anna Nottingham when she sent me a message by computer to go to the grocery store to purchase a few extra things, such as beans, peanut butter, etc., something that wouldn’t ruin. How I wish she had mentioned toilet paper. I did get a couple of jars of peanut butter and a few things.

There was only one problem. Everyone else must have known something was going to take place. What Anna was trying to warn me about was being confined to the house and not be able to go to out, which has sure come true.

What I don’t understand is why people are hoarding so much toilet paper. Unless, as I said before, there’s a recipe for toilet paper casserole or soup.

Sunday morning Vickie Power and I decided to go to a store, since it had a special on something that my son Keith likes. Vickie and I arrived early, stood in line a few minutes before the store opened its door. That was a huge mistake as the people behind us went around us like we were at the Indy 500 Race track.

The line was heading for the paper products, which were in the back of the store. It was a store that Vickie and I weren’t too familiar with, so all we had to do was follow the line as it led to the toilet paper! You were allowed one per customer.

Since my daughter Angie Wiederhold is disabled and can’t get out very much, toilet tissue was advertised so I decided to get a package for her. Vickie and I separated as I needed something from the pharmacy department, which I couldn’t find.

When Vickie and I got in the car she told me that she turned her head for a second and a man walked to her cart, had his hand and arm around her toilet paper in her cart. What she said to the man had me laughing so hard I couldn’t hardly drive. She said to the man, “Unhand my toilet paper!” then she proceeded to say, who ever heard of such a stupid thing to say?

The man continued standing there saying, “Oh I was just looking at it,” then asked where she found it. Vickie pushed her cart and got away from him.

My granddaughter is constantly on me, saying for me not to get out, that she will go get me anything I need.

Wednesday, March 23, was Angie’s birthday, it was a beautiful day. I took her a birthday card, her toilet paper and something for Bennie.

While in the parking lot of her apartment I got the bright idea to ask if I could take Bennie to the park, as we were going on lock down, quarantined, shelter in, or whatever it’s called on Wednesday night.

Bennie has ADHD, plus Angie hasn’t been able to do things with him. I suggested Angie that she go with us, much to my surprise she said yes.

We went to the park along the river at Sayler Park, which is beautiful. The playground was off limits, so we walked down a short distance to the Ohio River. Bennie found some small rocks, throwing them in the river.

Bennie played ball for a while, but my ankle was swelling so we decided to leave. Of course we ended our trip with a trip to Mc- Donald’s.

Even though everyone is confined to homes, being outside in parks is allowed, as long as you keep distance. It was a wonderful couple of hours just watching this young lad enjoying being outside.

Martha Breeding, who lives at Premium, shared a coin on Facebook that really brought back some memories. I really wasn’t positive at first, but it was scrip that miners were sometimes paid with by their employers.

If memory serves me right, sometimes the store owned the mines. The workers were paid by scrip, so the miners had to trade at their stores, the same way of trading on tab, or credit as it was known. Yes, I am old, and yes my dad was a coal miner, which I can proudly say, I was a coal miner’s daughter too.

It is strange how little things can take you back in time. Oh to be able to go back to the days of yesteryear, especially with the way things are today.

I was looking forward for the arrival of March, as Carcassonne Community Center had scheduled its opening square dance. Sunrise Ridge was featured, and even though I am still unable to dance I was heading for the mountains I call home. Of course that meant a Friday night at Campbell’s Branch Community Center with Kentucky Bluegrass Friends as the featured band, since Sunrise Ridge only plays every fifth Friday.

I was looking forward to heading for the mountains I love in April. That isn’t going to happen either.

Our trip to the Cherry Blossom Festival in Washington, D.C. is postponed until June, but if that will happen is anyone’s guess. At least I have been able to see a few videos of the cherry blossoms, which are breathtakingly beautiful.

One in particular looked like it was snowing cherry blossoms. I am just thankful my daughter Anna Nottingham cared enough to do this for me as a Christmas gift.

Belated happy birthday to my son Keith Ballard on March 29.

Hello Les and Pat Wagner, and all the extended family, I hope everyone is staying safe.

Buddy and Bernice Grubb, I am sorry to hear at the present time Buddy is in the hospital. I hope by the time this is published you are back at home.

Hello R.S. Taylor, please stay inside and take care of your self, thanks for enjoying The Mountain Eagle.

Johnny and Ann Calihan are staying in. Ann did sit on her porch for a little while enjoying a beautiful day.