Spring mustard patch is over and done 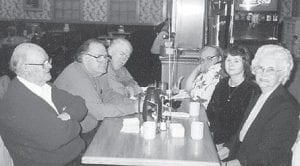 ENGLE FAMILY — Pictured are (front to back) Lorain, Ohio correspondent Emma Lou Engle and her husband, Red, along with their sons and daughters-in-law, Billy Wayne and Laredia “Redia” Engle and Valerie Engle and the late Bobby Nathaniel Engle.

Hello again, it’s quite chilly here. We had a pretty bad storm yesterday evening, but today we got a slow, drizzling rain, which was good for Red’s big garden.

Our mustard patch is over and done with, but I did put several bags in the freezer plus all we wanted some for eating now and gave Bill and Redia some. I’m hoping we can have a late patch.

I hope this finds everyone well and looking forward to a happy summer, that is, if we have one.

I’m having a garage sale and I do believe I’m going to have to put on a winter coat. Oh, for some sunshine and temperatures in the high 80s. I sometimes wonder why we came north instead of going south. Of course neither of us knew anything about Lorain, Ohio, or where it was located. The only thing we knew about was the steel mill and that they were hiring. We’ve been here for 56 years, so it’s home now. Of course I still say “down home” when I talk about the mountains of Letcher County.

Hello to Sue (Collins) Holder in the Deane area. I do believe the address is now Jackhorn. And to Nettie Bentley, Eustis, Fla. I hope both of you ladies are doing well and will continue to do so.

Last Sunday was Little Pilgrim Church time at Ruggles. We didn’t get to go even though we were ready. From what one of our friends told us, they must have had several visiting preachers and a really good meeting. One was Billy Miller from Michigan, who’s a son-in-law of Ralph and Leona Caudill. I have known them since Stuart Robinson days and have met their daughter, Brenda Miller, a granddaughter and grandson and his wife. Such a nice humble and sweet family!

Hey to all you Brown family who are scattered here and there. I do hope everyone is doing well. I’m so very glad I got to meet all of you and am looking forward to next time.

That brother of mine is really asking for it, and I do mean you, Mister Ronald Buford. He just called from Alabama to let me know he was having a ‘mater sandwich, and that he’d got the ‘maters from his garden. I really need to come up with a fitting punishment for him. Do you have any good ideas? It sure would be appreciated.

I don’t think I ever introduced you to our sons, so a bit about them now and more later.

Billy Wayne was born January 20, 1947, in Letcher County, and graduated from Clearview High School in 1965. He married Laredia “Redia” Gail Keathley on April 1, 1967, and they have three children, Jennifer Louise, Christopher Ryan (adopted), and Steven Wayne. He now has 12 grandchildren, and another one due in a few months.

Bobby Nathaniel was born on September, 25, 1948, in Letcher County, and died July 22, 2002. He was married to Valerie Kulak on July 3, 1975. They had two children, David William and Catharine Ann, and have no grandchildren. I will tell more about their lives at a later time.

Red has talked with his sister, Mae Sowards, in Pound, Va., and his brother, Charles, called from Johnson City, Tenn. He and Delores are doing some painting for their daughter, Darla.

I think Jean, her daughter Terri, granddaughter, Heather and niece, Lena have all gone to Maryland to visit Lena’s brother, Ray Hampton. He’s in rehab after having his left leg removed above the knee, and a toe on his right foot also. I have sent cards, but have not yet heard from him. Those we’ve talked to say he is really doing well and is in great spirits. I just hope everything continues doing well and he keeps improving.

I just took time out for lunch, and I must confess I didn’t cook today. I let McDonald’s do that. We do this now and then, mostly if I’m ready for a nap. I guess I’ll wait.

I’d better stop now while I’m still awake. Hello to Dottie (Kiser) Bentley in Louisville. I hope all is well with you and yours.

Wishing everyone well and sending love and prayers your way. Don’t forget the Engle-Sergent picnic on August 16, noon to dark, at Hill Top Park in Elyria. See you there?