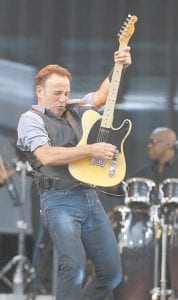 On January 5, rock star Bruce Springsteen will mark the 40th anniversary of the release of his first studio album, Greetings from Asbury Park, N.J. Springsteen is now nearing the end of his 2012 tour with the E Street Band in support of his 17th studio album, Wrecking Ball.

The 87-date international tour began in Atlanta back on March 18 with stops still to come this week and next in Oakland, Calif., Anaheim, Calif., and Glendale, Ariz. On December 12, Springsteen will perform at a Hurricane Sandy benefit at New York’s Madison Square Garden with other top acts including Paul McCartney, Roger Waters, Kanye West and The Who.

I saw my first Springsteen show on November 3 in Louisville at the KFC Yum! Center. As I sat down in the arena, I wasn’t sure what to expect. Many people had given me their impression of Springsteen (“Nobody performs like the Boss;” “You’ll want your money back from every other show you’ve been to,” etc.) yet no sort of forewarning could have prepared me for what was in store. I, along with another 18-year-old friend of mine, experienced a 63-year-old man jump around the stage with twofold the energy we’ve ever had on a soccer field.

Springsteen opened the concert by spitting out some of his not-so-crowd-favorite songs from Wrecking Ball. But even this didn’t stop him from being on fire; the Boss was crowd surfing through the audience by the third song. As he (safely) landed back on the stage he began to lead into the real guts of his discography. Backed by the 15-person E Street Band, Springsteen brought us back to hits such as “Glory Days” and “The E Street Shuffle.”

Throughout the show Springsteen brilliantly played off the crowd, causing one of the best moments of the concert when he brought three young boys on stage who sang one of his songs word for word. This is a great example of how old rock and roll can stay alive in even the youngest of hearts, so long as people like Springsteen carry it on.

One particular question from Bruce seemed to be the recurring theme of the night: “Do you feel the spirit?” There seemed to be an almost churchlike feeling brought on by the concert, caused mainly by the beautifully-voiced choir backing him up. During all the excitement there seemed to be a ghost looming throughout the show, and this was eventually addressed when the crowd had a moment of silence for Clarence Clemons, a longtime member of the E Street Band who had passed away in June 2011.

Springsteen rejuvenated the spirit in all of us with the energy he brought to this concert, and when he blasted out “Open All Night”, the entire building seemed to be alive with music. As the night began to come to an end and he was still throwing out hits like “Dancing in the Dark” and “Tenth Avenue Freeze-Out”, you really just had to admire this man.

Bruce Springsteen played three and a half straight hours of one the best concerts I have ever seen, and I now know why they call him the Boss.