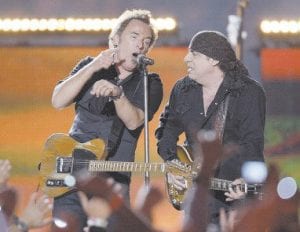 One was a 12-minute party, the other a 2-minute proclamation.

Bruce Springsteen and Jennifer Hudson used the Super Bowl stage for two very different performances: he proved he’s still The Boss with an electric halftime show, while Hudson showed she’s ready to return to the spotlight after the slayings of three family members.

Springsteen and his E Street Band had turned down numerous invitations to play the halftime show, declining the high-profile time slot because it was a bit beneath them.

Then the show slowly started to draw legitimate acts — U2, The Rolling Stones, Tom Petty and The Heartbreakers, to name a few — and Springsteen changed his view of performing in the middle of a football game.

He promised a 12-minute party, and more than delivered by charming the estimated 100 million television viewers on Sunday with his opening line: “I want you to put the chicken fingers down and turn your television all the way up.”

Springsteen then threw himself into his four-song set, a highly anticipated series of songs that had Las Vegas oddsmakers taking bets on which tunes he’d select. He opened with “Tenth Avenue Freeze-Out,” and worked in one of his trademark across-the-stage knee slides.

The move wasn’t without risk: He slid into one of the on-stage cameras, and seemed to be winded when he transitioned into “Born to Run.”

Next up was his newest piece, “Working on a Dream,” which was backed by a choir. He then closed out with a playful version of “Glory Days” that fittingly altered the lyrics to fit the occasion: Springsteen’s old high school buddy was “a big football player” instead of “baseball,” and threw a “Hail Mary” instead of a “speed ball.”

He and guitarist Steven Van Zandt then toyed with the crowd as the show came to an end, looking at their watches as the clock wound down. Worried they were about to hit “penalty time,” (a referee even raced out and threw a yellow flag), they closed it out right on time.

“I’m going to Disneyland!” the 59-year-old rocker shouted at the end.

It was a completely different energy than the one offered two hours earlier by Hudson, who made her first public appearance since the October slayings in Chicago of her mother, brother and 7- year-old nephew. Her estranged brother-in-law has been charged in the killings.

Wearing a flowing white top with black leggings and a militarystyle dark jacket, the 27-year-old singer/actress looked apprehensive and took a deep breath before launching into the anthem.

Hudson, who clocked in at 2 minutes, 13 seconds, looked relieved when she was through.

When she returned to her dressing room, she anxiously asked pre-game show producer Rickey Minor “How did I do?”

“I told her ‘Touchdown!'” Minor told The Associated Press after the performance.

“This was such an important performance, because it’s the first time everyone has seen Jennifer. But she’s in such a great place, with such great spirits and time can heal her wounds. She’s on fire right now and totally grounded.”

Minor, the music director for American Idol, has produced numerous Super Bowl pre-game performances, including Whitney Houston’s 1991 anthem in Tampa that’s considered the benchmark for singers. He said Hudson’s two cell phones lit up “like slot machines” following her performance, and she received a moving text message from Jamie Foxx, her co-star in “Dreamgirls.”

“His text said ‘Amazing. It brought tears to my eyes,'” Minor said. “She’s just getting so much love.”