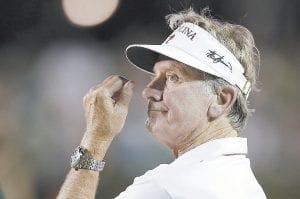 “Kentucky Wildcats are a pretty good team. They don’t look like some of their teams 10, 15 years ago,” said South Carolina coach Steve Spurrier, whose Gamecocks visit Lexington Saturday. (AP Photo)

Steve Spurrier believes South Carolina can still win the Southeastern Conference, so he wants his Gamecocks to quickly regroup from their stunning loss to Missouri last week.

The coach said the SEC’s East Division is full of good teams — including the Kentucky team the two- loss Gamecocks face this weekend — but no dominant one.

“If we can start playing, really playing, I think it’s a good chance whoever wins the East will have two losses,” Spurrier said.

The same thing could go for the Wildcats, who broke a 17-game SEC losing streak by beating Vanderbilt last week and took Florida to triple-overtime before losing their league opener.

Spurrier has beaten the Wildcats 20 of 21 times in his career at South Carolina and Florida. But said this year’s Wildcats are a lot better than the ones he used to beat by 60 points or more while coaching the Gators.

“Kentucky Wildcats are a pretty good team. They don’t look like some of their teams 10, 15 years ago. They are very fast, athletic. I think their defense is actually nationally-ranked in all categories,” Spurrier said.

The Wildcats allowed just 139 yards in last week’s 17-7 win over Vanderbilt and is ranked fifth in the SEC allowing an average of 323 yards a game.

“They are a real talented team, on the rise,” South Carolina receiver Nick Jones said. “We have to get ready for a real grind out battle.”

Meanwhile, South Carolina was being stunned by Missouri. The Gamecocks led 20-7 with 7:25 to go and had forced the Tigers to punt on 10 straight possessions before Missouri scored two touchdowns to win.

South Carolina also got beat up in that game. Spurrier said starting quarterback Dylan Thompson didn’t practice Monday with a sore neck, and receiver Pharoh Cooper, who also takes snaps, missed drills because he banged up. Both are expected to be back at practice this week and start Saturday, Spurrier said.

While a 6-2 team winning the