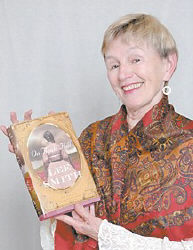 Artist Barbara Smith will bring her stage adaptation of one of Lee Smith’s novels to Big Stone Gap, Va., and Wise, Va., this month.

“On Agate Hill” is adapted from Smith’s powerful new novel.

It will be presented Wednesday, Nov. 28, at 12:15 p.m. at Mountain Empire Community College in Big Stone Gap and at 8:30 p.m. at the University of Virginia’s College at Wise.

The evening performance will follow a lecture in Fred B. Greear Gymnasium by author Lee Smith.

Barbara Smith made her off- Broadway debut in 1991. Playing the character Ivy Rowe, adapted from Lee Smith’s novel Fair and Tender Ladies, led to Smith’s touring of her one-woman shows. She specializes in the work of Southern writers and takes her customdesigned performances to libraries, schools and conferences as well as on stages.