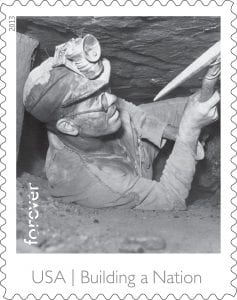 The coal miner pictured above is one of 11 of the stamp images taken by photographer Lewis Hine, who is famous for his work which helped tell the story of early 20th-century laborers.

The contributions of America’s industrial-era workers are memorialized on a sheet of Forever stamps titled Made in America: Building a Nation. The stamps, which feature blackand white photographs of early 20th-century industrial workers, were dedicated at the Department of Labor earlier this year by Postmaster General Patrick R. Donahoe.

“The Postal Service is proud to honor the men and women who helped build this country with their own hands,” Donahoe said. “They mined the coal that warmed our homes. They made the clothes we wore on our backs. Let each stamp serve as a small reminder of the dedication, work ethic, and sacrifices that make America great.”

Joining Donahoe at the ceremony was recently-appointed Secretary of the U.S. Department of Labor Tom Perez, Secretary- Treasurer of the AFL-CIO Elizabeth Shuler, and other union leaders.

“Stamps are like a miniature American portrait gallery,” said Secretary of the U.S. Department of Labor Tom Perez. “They are an expression of our values and a connection to our past. That’s why it’s so fitting that that this series depicts Americans at work. These iconic images tell a powerful story about American economic strength and prosperity. These men and women and millions like them really did build a nation.” 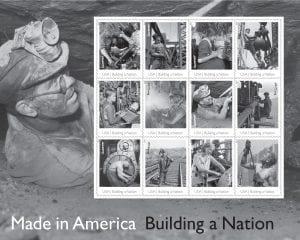 There also are five stamp sheets available, each with a different photo in the selvage area, or area outside the stamps, on the sheet. The coal miner appears again on a selvage, along with three additional Hine photos. A Margaret Bourke-White photo of a female welder is also featured.

The commemorative First- Class Mail Forever stamps are 46 cents each and are offered as a pane of 12 stamps. Customers may purchase the Made in America stamps at usps.com/stamps, at 800-STAMP-24 (800-782-6724) and at Post Offices nationwide. Many of this year’s other stamps may be viewed on Facebook at facebook.com/USPSStamps, or at beyondtheperf.com/ 2013- preview.