Star gets stay-at-home pitch from UK 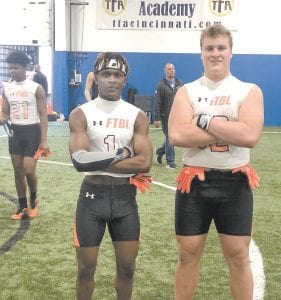 IN-STATE TARGETS — Jager Burton, right, and Frederick Douglass teammate Dekel Crowdus both have a lot of Division I offers, including Kentucky where the pitch is to stay home and help the Cats succeed.

Growing up in Lexington, it is no surprise that Jager Burton says he’s always been a Kentucky football fan. What is a bit more perplexing is that he also grew up an Oregon fan.

“I saw their uniforms and liked watching them when I was little,” said Burton about his fascination with the Oregon.

Now he is a 6-4, 280-pound junior offensive lineman at Frederick Douglass High School attracting attention from a lot more colleges than just Kentucky and Oregon. Others include Clemson, Ohio State, Purdue, Penn State and West Virginia. He’s made a camp visit to Alabama on Saturday and also got a scholarship offer from Nick Saban.

He knows there’s going to be some added pressure on him because of the Division I scholarship offers, but he doesn’t plan to change what has worked for him.

“I got the offers because of all the work I put in. I expected I would get some offers, just not quite this early,” Burton said. “But I have to work just as hard now even though I’ve got the offers to be an even better player.”

His senior teammate, offensive lineman Walker Parks, has been a verbal commit for some time even though UK and others continue to recruit him. Burton says Kentucky coaches have told him what a “priority” it is to keep top in-state players at home.

“They talked about some of the players they have missed out on in state like Jed (Willis), Damien (Harris) and even Wandale (Robinson) last year and how much it could have helped if they had stayed home,” Burton said. “They are really giving me the ‘stay at home and make your state proud’ scenario. I would really like to be close to home but that also will not be a deciding factor in where I go. I don’t care to be away from home.”

He admits Parks, his friend since he was 5 years old, talks to him some about Clemson, a school Burton readily admits he likes a lot.

“But there is no pressure from him to go there because of him,” Burton said. “I would not go just because he is there. It would be a plus having him there but I would not pick a school solely off where he is going.

“Walker has helped me a lot. Some mistakes he made in recruiting by focusing on things that did not matter as much he told me before I did the same thing. I focused more on things coaches are looking at and it helped me know what things would be like.”

He also credits Frederick Douglass head coach Brian Landis, offensive line coach Nathan McPeek and his parents for helping him with his recruitment.

“I have a bit of a support system here,” Burton said.

“He’s a great coach. All the college camps I go to, they teach us the same thing or pretty much the same things that he does,” Burton said. “It’s not like we have to learn different things when we go to camp because he’s such a great teacher on a daily basis for us.”

The entire Frederick Douglass staff apparently is teaching all the right things. Not only do Parks and Burton have high level scholarship offers, but junior receiver Dekel Crowdus has offers from Ohio State, Kentucky, Penn State, Tennessee, West Virginia and others. Incoming freshman T.J. Burton already has a UK offer. Sophomore receiver Dane Key has offers from Marshall and Western. Sophomore safety Ty Bryant likely will get numerous offers this summer.

“Wherever I go I just want to make the people of Kentucky proud,” Burton said. “I hope we are changing the culture of people sleeping on Kentucky football.”

Burton’s plan now is to commit before his senior season so he can enjoy that last high school season with his teammates.

“I want to prioritize high school school over my future my last year,” Burton said. “Last year I didn’t really experience what it might be like to be targeted by teams because of my offers since my first offer didn’t come until after we lost in the playoffs. I want to see what it is like this year but also enjoy recruiting and eventually make the best decision I can that is right for me.”

ESPN analyst Jay Bilas thought Kentucky guard Ashton Hagans was one of the “best defenders” in the country last year as a freshman.

“Certainly I would put him among the two or three best onball defenders at the point guard position along with Tre Jones of Duke. He’s relentless,” Bilas said.

Hagans did not put his name into the NBA draft even to get feedback from NBA personnel. He knew quickly he wanted to stay at UK for a second season to improve his overall game, a move Bilas thinks was the right one for him and Kentucky.

“I think he can improve as a shooter. He needs to become a better perimeter shooter,” Bilas said. “I think he’s capable of improving there and improving his shot consistency. Another guy who is a very good player. Maybe I should be, but I was not surprised that he decided not to come out (in the draft).

“I think he’s got a ways to go to become more of a finished product. That’s not a knock on him. Look how well it went for PJ Washington at the same school. That’s certainly a very good blueprint.”

Former ESPN college basketball insider Andy Katz now writes for NCAA.com. He has Hagans as one of the top five returning SEC players along with Andrew Nembhard of Florida, Skylar Mays of LSU, Austin Wiley of Auburn and Anthony Edwards of Georgia. Katz picked Hagans to be the SEC’s “breakout star” next season.

“Hagans emerged as the leader midway through the season and embraced the role,” Katz posted on NCAA.com. “His numbers in all areas should increase, and as long as turnovers don’t as well, Kentucky will have the lead guard it needs to shepherd in another elite recruiting class.”

Former Kentucky star Randall Cobb is getting ready to start his ninth NFL season — even though it will be with Dallas and not Green Bay like his first eight years were.

What kind of message does he hopes that sends to kids either in his hometown of Alcoa, Tenn., or anywhere else?

“I hope the message is just continue to chase your dreams,” said Cobb, an all-American and all-SEC player at UK. “I was fortunate enough to live out my dreams. It took a lot of things happening for me to get to this level and stay at this level.

“There were a lot of things had to give up. A lot of sacrifices that you have to make to be able to continue to play. But no matter what level you are, every day is still about proving what you can do to yourself and others.”

Cobb still remembers those who doubted him in high school. He didn’t even have a scholarship offer from nearby Tennessee until he had been committed to UK, and he never waviered on his word to play for the Cats. Many wondered about his size going to UK and it was the same when the Packers drafted him.

“Over the course of my career I got doubted a lot from every stage of the game,” Cobb said. “I just think it makes a better story when you are able to overcome a lot of adversity and do more than what people think you can. That’s why I hope kids look at me and see they should chase their dreams because they can come true like mine did.”

Kentucky basketball recruiting target Jalen Green was picked as one of 18 finalists for the USA Basketball Under 19 World Cup team that will play in the World Cup June 29-July 7 in Heraklion, Greece.

He has transferred to Prolific Prep for his senior year. Prolific Prep annually plays at the Marshall County Hoopfest in December and McCracken County Mustang Madness in January. Prolific Prep will be at both showcases again this season as well as possibly one or two other events in Kentucky.

His trainer, Marcus Green, says there is no one thing the player does best.

“He just does a lot of everything, which is one thing the coaches all really like,” Marcus Green said. “He does so many things well. He didn’t just develop one part of his game. He knows he has to be an all-around player whether it is playing defense, shooting, getting to the rim.

“I really think he has the ultimate game. He has improved his jump shot and is working to make it even better. He would stay in the gym forever but me and his mom have to finally just say enough is enough and get him out of there.”

Quote of the Week: “I just needed to step away and find myself and find really what I wanted to do. That was hard to do in such a high-pressure environment away from family. My decision to leave was based off that. I missed Kentucky every day and still do. But finishing the season on a NBA roster and hoping to start on roster next year makes it worth it,” Isaac Humphries on why he left UK after his sophomore year to play professionally in Australia.