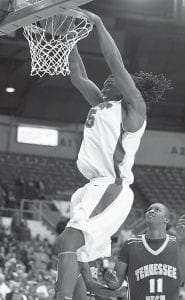 College basketball’s best rebounder just shakes his head wondering how he got to this point in his career.

Kenneth Faried never thought he’d make it this far, at least not at Morehead State.

The 6-foot-8 senior center — who broke Tim Duncan’s modern day NCAA record for career rebounds while leading the Eagles (24-9) to their second Ohio Valley Conference championship in three seasons — shrugs his muscled shoulders when asked how a black kid from Newark, N.J. survived four years in the eastern Kentucky hills.

“If you’re committed to me, I’m committed to you,” Faried said while playing with his trademark dreadlocks. “Morehead State, they stuck with me through the hard times.”

And there were hard times.

He nearly quit during his freshman season, storming off the floor one day as coach Donnie Tyndall put the Eagles through another grueling conditioning drill. Faried called his mother, Waudda, asking to come home. She told him to grow up and get back on the floor.

Bigger schools who ignored Faried as a raw high schooler tried to lure him away as a sophomore after seeing the way his relentless rebounding helped guide the Eagles to their first NCAA tournament appearance in 25 years.

“We had scumbags all around the country trying to pull him away,” Tyndall said.

He toyed with leaving early for the NBA last spring after being named Ohio Valley Conference Player of the Year as scouts flocked to watch him play.

Yet the rambunctious kid with the still thick Jersey accent opted to stick at the modest school with almost zero basketball tradition. One that’s spent decades rendered nearly invisible playing in the shadow of Kentucky, an hour west by the interstate, a lifetime away by reputation.

Not that Faried didn’t want to leave.

More than once he and best friend Demonte Harper, a senior guard, sat in their dorm room as freshmen role players in the midst of a so-so 15-15 season and plotted a way out.

“We felt like we just needed to leave,” Faried said. “We were like, ‘there’s not going to be any success here. We’re not ever going to do anything.’ That’s when we realized we’ve got to put in the work.”

There’s not much else to do in Morehead.

So Faried dedicated himself. Turned his anger of being overlooked into fuel. When Morehead would play in a series of “guarantee” games against big-time schools like Louisville he’d see more heralded players giving half the effort and do his best to embarrass them.

Rick Pitino noticed. So did Florida coach Billy Donovan, who called Faried a “freak.” Donovan compared him to former NBA star Dennis Rodman after watching Faried put up 20 points and grab 18 rebounds in a tough six-point loss to the Gators last fall.

“ There is nobody like him,” Donovan said. “He is totally different. Sometimes people talk about why he’s a great rebounder, athletically he’s at a different level. You add in the fact he’s a relentless pursuer of the basketball and that he understands what he does … there are not a lot of Kenneth Farieds floating around out there.”

Certainly not in the Ohio Valley Conference.

Tyndall believes Faried is a “once in a lifetime player” in the OVC. It’s not just talent. Sure his body has matured — his frame is a chiseled 235-pounds, 50 pounds heavier than when he arrived on campus — but so have his instincts.

“It’s like he just knows where the ball is going to go,” Harper said.

Faried enters the NCAA tournament against Louisville Thursday with 84 career double-doubles, tied with Ralph Sampson for second- most all- time behind Tim Duncan. His 1,643 career rebounds are a modern day (post- 1973) record.

This from a player who couldn’t make a left-handed layup as a freshman. Who still struggles offensively. Who quickly grew winded when asked to play for long stretches as an underclassman before undergoing nose surgery last summer to help him breath more efficiently.

There have been other issues too. His mother has battled a series of health problems throughout her adult life, including Lupus. Getting to watch her son play was an ordeal. Her future weighed on him. More than once he pleaded with her to let him come home and let him take care of her.

When he considered heading to the NBA, the idea of providing his mother with some financial security was one of the motivating factors. But a handful of sobering phone calls helped Faried decide to stay in school.

Tyndall had Faried sit in his office while the coach talked to NBA officials about Faried’s draft prospects. Tyndall would put the call on speakerphone so Faried could hear the details. He can’t shoot. His footwork in the post needs polish. He’s a tweener too small to play center and not skilled enough to play forward.

“I thought I was doing alright, you know, I was conference player of the year last year, and then it was like, ‘man,’” Faried said. “ But you know, I needed to hear that. I needed to know. It keeps you grounded.”

There’s a selflessness to Faried that keeps his teammates at ease. He doesn’t ask for the ball on offense, though his 17.6 points a game leads the team.

Faried’s post-basketball goal is becoming a game analyst. The big man with the charismatic smile is on track to graduate in May with a degree in speech communication.

It’s heady territory for a player whose AAU teammates — including Pittsburgh’s Travon Woodall and Florida’s Mike Rosario — laughed when he told them his college destination.

“They were like, ‘are you serious, no, really, where are you going?’” Faried said. “I got rolled hard for coming here.”