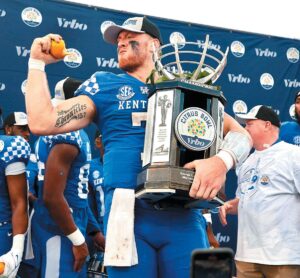 Quarterback Will Levis had a historic season and led UK to a Citrus Bowl win but offensive coordinator Liam Coen says coaching him has some unique challenges. (Vicky Graff Photo)

Four-star receiver Dane Key intended to finish his senior season at Frederick Douglass High School and enjoy one final season of baseball, a sport he’s always enjoyed and thought at one time he might even play in college.

However, the Kentucky signee is now enrolling at UK for the spring semester and it’s not hard to understand his thinking.

“Getting into the system and getting to learn under coach (Liam) Coen early and getting an advantage getting into the playbook early is something I talked about with my family and we thought was in my best interest to get to work early,” said Key, the Paul Hornung Award winner as the state’s top high school player.

What that means is that Key sees a chance to play as a true freshman and realizes getting a full off-season, including spring practice, under offensive coordinator Liam Coen enhances his chances to playing next season.

“Hitting that weight room and getting to play in spring practice is an advantage that can help me play earlier. I get that,” Key said. “Coach Coen told me to stay in the playbook. I will be at the facility and get a lot of work, but the main thing is to get on that playbook.”

Key also admitted being so close to home makes it easier to go ahead and start his collegiate career.

“If I do miss mom and dad, I can drive home 10 minutes away and have dinner. Anything my high school friends do, I can still get with them and do,” Key said.

Coach Mark Stoops is apparently going to give Key, the son of former UK linebacker Donte Key, plenty to keep him busy.

“He’s a guy that I would expect to come in and play just because he has the size, he has that ability to make competitive catches, and the great length that he has, but he’s also very sudden,” Stoops said about Key on national signing day.

Key appreciated what Stoops said but also knows “nothing will be given to me” at Kentucky. The Cats signed four other receivers and also have some receivers off last year’s team waiting for a chance to play.

“I have to come in ready to work. I am going to have to earn everything that comes to me,” Key said. “I am really happy with the other receivers we signed. Just being able to be around other studs makes it a lot better. You can learn from other people, So learning from the receivers we brought in is going to be a big advantage for me.

“A couple of them are really fast and you can’t teach speed. Being around those fast dudes, I will try to learn and get faster if I can.”

Kentucky’s premier receiver this season was Wan’Dale Robinson. Key texts him regularly and would love to think he’ll return to UK for another season.

“He tells me I can do something special here with the offense,” Key said. “I really can’t tell you what he is going to do (about next year). I hope he does what is best for him. If he wants to come back, that will be great. But if he does decide to leave, I am happy for him and whatever is best for him.”

“His work ethic that he did all through spring ball and all season separates him. Getting in that playbook and getting stronger and faster, that’s what gave him an advantage, especially with the skills he has,” Key said. “So I know I have to work and do what needs to be done to succeed in the SEC.” s

On the basketball court, Oscar Tshiebwe is a rebounding machine with a non-stop motor. But what is he like off the court?

“Oscar is super funny. He is like the friendly giant at the end of the day,” UK freshman guard TyTy Washington said. “He is super friendly.

“Every time we go out, Oscar is always making new friends. I don’t know how he does it but he always does. On the court, he is a different type of animal.”

Washington says Tshiebwe can even do a funny John Calipari impersonation that players enjoy.

“We both have fun,” Washington said.

Tshiebwe has tried to teach Washington how to speak French without a lot of luck.

“It’s just hard not to have fun when you are around Oscar,” Washington said. s

Will Levis had a historic season for Kentucky football in his first year with the Wildcats after transferring from Penn State. He led UK to a 10-3 record while completing 233 of 353 passes for 2,826 yards and 24 scores and ran 107 times for 376 yards and nine touchdowns. He directed the game-winning touchdown drive to beat Iowa 20-17 in the Citrus Bowl last week.

Offensive coordinator Liam Coen, also new to UK this year, says Levis is both a fun and challenging player to coach.

“From the improvement standpoint, that’s what we always talk about with Will is every single day of practice is him getting another rep at being a full-time quarterback,” Coen said. “Every single seven-on-seven, every single blitz period, every single team period is an opportunity to get better. He’s still learning how to play the position because he wasn’t used to playing this position in years past.

“That’s why I just think that the ceiling is so high for him to be able to play at a high level and continue to push himself to get better and better. He is not just going to continue to take practice reps to take reps. He tries to practice to get better every single day.”

Levis announced before the bowl game that he would return to UK for the 2022 season. That means he’ll have a full offseason, including spring practice, with Coen — something he did not have before this season.

“You better be on your stuff. You better be ready to go as a coach,” Coen said about coaching Levis. “When you don’t, you can tell he gets bored. That’s something that it’s on me as a coach and us as coaches to challenge him daily, both mentally and physically, with some things.

“That’s going to be a big-time emphasis for us this spring is continuing to challenge him both mentally and physically to get better. He definitely raises the standard in the room, in the offense, and as a coach.” s

Considering the praise that Kentucky’s offensive line got this season — and the job UK did recruiting offensive linemen in the 2022 signing class — there has been very little praise for first-year offensive line coach Eric Wolford.

He not only had to replace tackle Landon Young and center Drake Jackson, two in-state players who anchored the line, but he also had to follow the late John Schlarman.

However, sixth-year senior Luke Fortner, who moved from guard to center, says Wolford made sure the offensive line continued to be a strength of the team and never worried about getting or not getting credit for what he was doing.

“He probably enjoys the fact you don’t talk about him much. But it’s a huge compliment. He’s done an incredible job. Like you said, a new O line coach, new offense, coming off losing coach Schlarman,” Fortner said.

“The job he’s done with getting us ready to play this year has been absolutely incredible and he’s glad you don’t mention his name. We’ve had some young guys come along really well. We’ve had some veterans play really well and I’m proud of our offensive line.”

Quarterback Will Levis said it was incredible how the line adapted to the diversification of schemes new offensive coordinator Liam Coen used compared to what Kentucky had been doing.

“Bringing a new offense to a line that is pretty experienced and used to running certain concepts, it took a few games for us to find our true identity and like what our bread and butter is in terms of what schemes work best for our offensive line. But they just did an incredible job this year,” Levis said. s

Jacob Toppin can produce highlight plays with his athleticism whether it is a thunderous dunk, acrobatic move in the lane or blocked shot. He’s considered the most athletic player on the Kentucky roster but insists he doesn’t get caught up thinking about what athletic play he might make.

“I am going to make hustle plays and do whatever I can do to help this team win. We can win games without me scoring. That is not a problem for me. Hustle plays bring wins and that’s what I know I can always do.”

Toppin says players can bring energy in unique ways even if they are not in a game and Kentucky has started doing that.

“Our bench has been great. On the bench, everyone is bringing energy. Even if someone is not playing a lot, they are still bringing energy,” Toppin said. “That shows how we are connected and want to see everyone succeed.” s

Kentucky fans certainly showed their appreciation to former coach Tubby Smith last week when he had his jersey retired during a pregame ceremony before High Point lost 92-48 to UK.

Smith spent 12 years coaching at Kentucky — two as an assistant to Rick Pitino and 10 as head coach — and won a national championship in 1998. He’s also been head coach at Tulsa, Georgia, Minnesota, Texas Tech, Memphis and now High Point.

The game at Kentucky was his 1,000th game as a head college coach — he has 637 wins in 31 years. Smith recently turned 70 and after the UK game I asked him how much longer he intended to keep coaching.

“My wife won’t let me quit, man. I have been trying to. She likes this lifestyle,” Smith joked. “No, it’s getting — you know, at certain times — I go back to my pops, raised 17 kids with mom and dad.

“He said, ‘Boy, there is going to come a time you’re not going to be able to fight like you used to.’ Stamina. It’s not so much drive. Every coach loves coaching. I mean, Roy Williams, Mike Krzyzewski, all the guys, the legendary coaches planning on retiring, they would still be coaching, but you can only go so long.

“It’s like a boxer or a basketball player. There is a window of longevity. I’m having a lot of fun here at High Point. We just built a new arena, facility, so I’m excited about that. I’d hoped we had won some of those close games and have a better record right now, but it’s a process. We want to finish this journey and then we’ll make a decision about retiring.” s

The 22nd annual All-American Bowl Saturday in San Antonio will have four future Kentucky football players in the game that will be shown at 1 p.m. EST on NBC and Peacock.

Defensive back Alex Afari of Cincinnati, offensive lineman Kiyaunta Goodwin of Louisville, receiver Barion Brown of Nashville and linebacker Keaten Wade of Nashville will all be playing in the game. s

Quote of the Week: “I think about COVID a lot. It changed the entire world. When I am in my room, I think about little stuff like that. I am vaccinated. So is the whole program. When I am on the court I am not worried about COVID because we did what we had to do to stay as safe as possible,” UK freshman guard TyTy Washington on if COVID worries impact his play.