Artists range from Ke$ha and Molly Cyrus to Kris Kristofferson 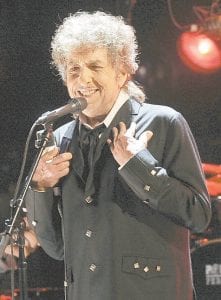 Anyone who ever doubted the transformative power of Bob Dylan’s music need only look to Ke$ha.

The irreverent pop star known for singing about brushing her teeth with “a bottle of Jack” turns poignant while covering a song from one of music’s great lyricists on the new four-disc “Chimes of Freedom: The Songs of Bob Dylan Honoring 50 Years of Amnesty International.” The project features 75 newly recorded Dylan songs by 80 artists, including Adele, Sting, Sugarland, Elvis Costello, hip-hop artist K’naan and others to support the human rights organization. The album will be available internationally on Jan. 30.

Ke$ha is one of the more un- likely stars to contribute to the compilation, released Tuesday. The pop star defined by party anthems like “Tik Tok” and “Your Love Is My Drug” took on Dylan’s “Don’t Think Twice, It’s Alright.” As she found herself alone in her bedroom for the first time in months, the words of the song — about a person bidding goodbye to a lover — took on a new, deeply personal meaning. She realized she was saying goodbye to her carefree, former life — before big hits and world tours brought on pressure and priorities. She broke down as she began singing, and the emotion is captured on the record.

“Everything has changed. It’s amazing, but there are moments that are incredibly lonely. This caught me at one of those incredibly lonely moments, and it really struck home. There’s a line, ‘It’s a long and lonesome road, babe, where I’m bound I can’t tell.’ It’s tragically relevant,” said Ke$ha in a phone interview. “I think these are all positive things for young people to see that you can be strong and you can be irreverent and you can say what you want and you have the freedom of speech, but I’ve learned that vulnerability is actually an asset. It can be just as much of an asset as strength.”

Ke$ha isn’t the only eye-popping name on the compilation: Nineteen-year-old Miley Cyrus does a rendition of “You’re Gonna Make Me Lonesome When You Go.” The project has a wide range of acts, from Maroon 5 to 92-yearold folk legend Pete Seeger, who sings “ Forever Young” with a children’s chorus. Dylan waived the publishing rights to his entire catalog, and all of the artists, musicians, engineers and others involved in the recording process did everything pro bono.

Aerosmith guitarist Joe Perry, who recorded “Man of Peace,” describes it as “thin ice” to cover an artist as iconic as Dylan, because not only are his songs brilliant, but his performances of those songs have become so revered themselves.

“( Artists like Dylan) know where ( the songs) live and breathe and where the heartbeat is. So covering them can be a touchy thing,” said Perry, who recorded the Dylan song “Man of Peace.” ‘’Hopefully you don’t make it different just for the sake of making it different. I just wanted to kind of reinterpret my take on the song and just have fun singing it.”

Legendary country artist and actor Kris Kristofferson considers Dylan a personal friend but says he’s been an inspiration and a hero a lot longer than that. Johnny Cash introduced them while Kristofferson was working as a janitor at Columbia Recording Studios in Nashville in the 1960s. At 75, Kristofferson says he has been around long enough to understand and appreciate Dylan’s impact on music.

“If you look at pop songs before Dylan, none of them were poetry like his are. He opened up the doors for creative writers and made songwriting to me what it is today,” said Kristofferson, who covers “Quinn the Eskimo (The Mighty Quinn).” ‘’Music was a whole lot different when I was a little kid. Pop music was lifted up as an art form by Bob Dylan.”

British pop singer Natasha Bedingfield recorded “Ring Them Bells” in Nashville during her U.S. tour last year. She said she used to listen to it as a kid with her brother and sister.

“To me the song is about freedom, ‘Ring them bells for the blind and the deaf, for the innocent,’” she said. “For me it felt quite poignant, particularly for this album, where Amnesty is all about people who are being unjustly treated.”

“Chimes of Freedom” is a follow-up to Amnesty International’s 2007 collection of John Lennon songs performed by major artists, called “Instant Karma,” which raised over $4 million for their efforts in Darfur.

“Music has been at the heart of so many movements for change,” said Julie Yannatta, who served as the album’s executive producer with Jeff Ayeroff. “Music has a way of reminding us who we are at our essence and what we need to do to live together in a better world, and Amnesty is very much a part of that.”