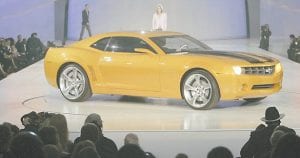 NEW CAMARO – The Chevrolet Camaro Bumblebee was introduced by GM over the weekend in Detroit. (AP Photo/Paul Sancya)

Adam Levine, lead singer of Maroon 5, summed up the reason his hitmaking pop group agreed to appear at the GM Style event on January 12: “They said: ‘There will be hot girls and cars,’ and we said ‘Yes!'”

Maroon 5 were joined on the bill by Grammy-winning R&B songstress Mary J. Blige and rock-rapper and local hero Kid Rock, but the cars were the stars of this show.

While the performers did their thing, General Motors Corp. was giving the stylish set a first look at its Chevrolet E85 Hot Rod and Camaro convertible concepts as well as 17 other offerings.

GM Style was held in a football field-size, climate-controlled pavilion on the Detroit River, just east of GM’s global headquarters. It came on the eve of the opening of the North American International Auto Show’s press preview days.

Blige, who celebrated her 37th birthday a day earlier with a surprise dinner with her father at a Detroit restaurant, strolled into the interview area ahead of the event in an ensemble that included knee-high Alexander McQueen boots.

“I’ve seen the cars, and they are off the chain,” Blige said of the evening’s vehicle lineup.

Rock, born Robert Ritchie in nearby Romeo, Mich., was similarly impressed with GM’s vehicle collection. He owns a 1962 Impala among other vintage autos, but said his everyday vehicle is a Cadillac Escalade.

GM executives mingled during the pre-show period with the likes of NASCAR driver Jeff Gordon, retired NFLstar running back Jerome Bettis and actor and singer Nick Cannon in a cramped cocktail area.

Hundreds of people dressed in casual chic sipped mixed drinks and munched finger food as an oversized clock counted down to the beginning of the night’s festivities.

GM Style kicked off with Blige walking purposefully the length of the runway all the while belting out her new hit “Just Fine.” When she reached the end of the runway, she waved hello to those in the front row – GM CEO Rick Wagoner and Detroit Mayor Kwame Kilpatrick, among others.

Following closely behind Blige was a vintage 1953 Chevrolet Corvette and six leggy models sporting the latest from Marciano.

As the opening guitar riff of Maroon 5’s set began, six sunglasses wearing models dressed in Mark Zunino assembled before Levine and the band, then headed down the runway followed closely behind by a shiny Saturn Astra Tuner concept.

In most fashion shows, the designer ends the show by walking down the runway to applause, and GM Style was no different – in this case Ed Welburn, GM’s vice president of design.