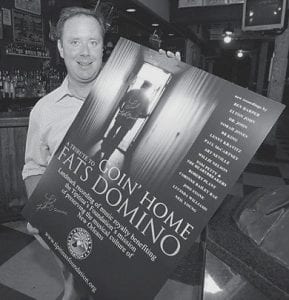 Bill Taylor, executive director of the Tipitina’s Foundation and executive producer of “Goin” Home: A Tribute to Fats Domino” posed for a photograph at Tipitina’s nightclub in New Orleans on Sept. 20. The two-disc album was released this week. Taylor is posing with a copy of the new album along side of a bust of New Orleans music legend Roeland Henry “Professor Longhair” Byrd. (AP Photo/Bill Haber)

Some of the biggest names in music pay homage to Fats Domino on a new album, hoping it will help drive the recovery of the city’s music soul.

Elton John, B.B. King, Bonnie Raitt, Paul McCartney, Lenny Kravitz and other bigname artists joined dozens of New Orleans musicians in recent months to record some of Domino’s most memorable hits. The result is a two-disc album of 30 songs originally recorded by the 79-year-old rock and roll Hall of Fame performer titled “Goin’ Home: A Tribute to Fats Domino.”

Releases worldwide yesterday (Tuesday), the album includes a 1975 recording of “Ain’t That A Shame” by the late John Lennon, “I’m Walkin”‘ by Tom Petty & The Heartbreakers, “Blueberry Hill” by John and “I Want to Walk You Home” by McCartney and New Orleans jazz pianist Allen Toussaint.

“When I saw the lineup for this album, I was honored to be asked to be a part of it,” said Renard Poche, a New Orleans guitarist who in March – with Domino looking on – recorded “I’m Gonna Be a Wheel Someday” with jazz pianist Herbie Hancock and fellow New Orleans musicians George Porter Jr. and Zigaboo Modeliste.

“You could tell he was happy to be there, watching us record his music,” Poche said. “He had that glow, that permanent smile on his face the whole time. I think he’s very appreciative that all these big names are coming together to help out.”

Though Domino opted not to sing for the album, he attended some recording sessions and personally called on King and Willie Nelson to lend their voices to the album. Nelson recorded “I Hear You Knockin”‘ and King “Goin’ Home” backed by Ivan Neville and his band.

Proceeds from the album – which cost only about $50,000 to produce because many artists contributed without pay – will benefit the nonprofit Tipitina’s Foundation, which produced the album. The foundation’s music programs are geared toward getting instruments in New Orleans schools and providing mentors for young musicians.

A portion of the proceeds also will be used to rebuild Domino’s flood-ravaged studio in the Lower 9th Ward, where he rode out Hurricane Katrina in August 2005 and had to be rescued from a second-story window. For more than a year now, he has been living in the New Orleans suburb of Harvey with his wife, Rosemary.

Since Katrina, many local musicians are still living outside the city, traveling farther for work or working second jobs to make ends meet. One of their biggest concerns has been ensuring the city’s musi- cal traditions survive.

Formal music programs like those offered through Tipitina’s have helped unite musicians with youngsters wanting to learn, said Poche, who serves as a mentor for high school music students.

“I’m not just teaching them about the music, I’m talking to them about the business, the emotional side of it, how to build up some calluses and deal with rejection,” he said.

Theresa Andersson, a Swedish born singer and violinist who moved to New Orleans in 1990 when she was 18, said Katrina made her feel an urgency to pass on her musical experience and knowledge. She now volunteers three days a week at a New Orleans school.

“It’s an important role for the musicians,” she said. “Not just to work with the kids but to educate people outside the city about what’s going on here.”

Andersson said the opportunity to record “When the Saints Go Marching In” – the closing song on the Domino tribute album – was an honor and a great way to contribute to the city’s recovery.

While some artists chose to stay true to Domino’s original recording style, such as Petty’s rendition of “I’m Walkin”‘ and Randy Newman’s “Blue Monday, others went with a heavy dose of their personal music stylings.

Robert Plant went spiritual with “Valley of Tears,” recording it with the Soweto Gospel Choir, and Kravitz kicked up the bluesy “Whole Lotta Loving” with the accompaniment of Rebirth Brass Band, Troy “Trombone” Shorty and other New Orleans musicians.

“If you look back at the time when Fats was recording, back in the ’50s, there were not a lot of female artists,” said Bill Taylor, executive director of the Tipitina’s Foundation and the album’s executive producer.