Stars were bright in Bowling Green 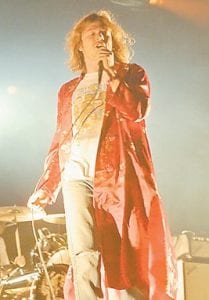 Bowling Green, Kentucky was the setting for the Starry Nights Music and Arts Festival.

This two-day event took place recently on a motocross track on a farm in the south-central Kentucky town. Though the festival only lasted two days, it was packed with several world class acts, including Bowling Green’s very own hometown heroes Cage the Elephant, who returned to curate the festival and enlisted other top acts including Manchester Orchestra and Portugal the Man.

Friday (Sept. 28) marked the first day of the festival, and though rain and heavy fog created obstacles, many people showed up to watch bands that were playing from 9:30 p.m. until 2 a.m. that night. These bands included Technology vs. Horse, Canago, Five Knives, and Samaaa. The front-runner to the Friday night set was by far Bowling Green natives Buffalo Rodeo, the five-piece band that kicked off the festival. Though they were unfamiliar to many, their diverse sound encouraged many fans to make a trip to the merchandise tent to pick up their own copy of the band’s album that was made in their living room the night before.

The festival’s final day featured the headlining acts Manchester Orchestra, Sleeper Agent, Portugal the Man, and the most anticipated group of the night, Cage the Elephant.

Though Cage the Elephant attracted the majority of the crowd to Starry Nights, concertgoers were entertained by 14 other bands before the group was set to play. These bands started playing at 11 a.m. on Saturday morning and included talent like Wild Belle, a band who’s scratchy, vintage female vocals paired with their psychedelic guitar sound, set themselves apart from many of the days other acts. Other bands included The Whigs, a garage rock band from Athens, Georgia who recently released their latest album Enjoy The Company, as well as JEFF the Brotherhood, a Nashville duo whose loud guitar matched with equally loud drums drew many fans to their set on the Little Dipper, the smallest of the festival’s two stages.

As the day progressed several other acts played, including Manchester Orchestra, an alternative rock group from Atlanta. With lead singer Andy Hull’s unique songwriting and unusual voice, which ranges from a haunting whisper to a growling scream, their set was one of the many highlights of the festival. Other highlights were provided by Portugal the Man, a four-piece band that played an hour-long set that was filled with their well known songs spliced together with some mindbending jams. During this set the band’s bassist took the time to address the festival’s next act. After clearing his throat he said, “Now, I understand that you’ve got some hometown heroes playing tonight.” And with that the crowd went wild as the band members wrapped up their set with a cover of The Beatles’ classic “Hey Jude.”

While the sun was setting, a large crowd was gathering around the Little Dipper Stage to none other than Bowling Green natives Sleeper Agent. Though this six-piece band has only been together for three years, Sleeper Agent have received global radio time for their hits “Get It Daddy” and “Get Burnt.” Excited to play for their town of origin, lead sing Alex Kandel addressed the familiar faces by saying, “I don’t know about you, but I’m really proud to be from Bowling Green right now!” The group went on to prove that by playing several brand new songs that had never been performed, including the recently written song “Be Brave.”

After Sleeper Agent’s set, it was finally time for the long awaited return to Bowling Green of Cage the Elephant. Playing on The Big Dipper stage (the largest of the two festival stages) fans packed into the field erupted with applause as the members of Cage the Elephant walked onstage. This applause grew even larger as lead singer Matthew Shultz came prancing out wearing bright red kimono and took on a wild onstage persona as the band opened with “In One Ear.” During this song Shultz, never staying in one spot, jumped staggered and paced side to side, singing the whole time.

Shultz then took off his kimono as guitarist and brother Brad Shultz took the time to acknowledge the high energy crowd by saying, “This is the greatest show all year.” With those words fueling the crowd the band exuberated even more energy through the group next songs as his brother’s smooth voice complimented the group’s garage rock sound. These songs included “Around My Head,” “Tiny Little Robots” and “Aberdeen.” Before continuing the set Matthew Schultz took the time to assess his surroundings and after a brief moment of silence the singer said, “Starry Nights, I just love to say that. Happy Starry Nights everyone!” The band then continued with several more songs including “Shake Me Down,” which featured the shooting of fireworks into the sky to create even more stars to the already starry night.

When “Shake Me Down” had finished echoing through the field and the smoke from the fireworks had cleared, the band left the stage, only to return for an encore. Before playing the show-ending “ Ain’t No Rest for the Wicked,” Shultz took the time to say hello to his family by pointing to the side of the stage and introducing his dad and mom. Then Schultz gestured to the audience and with a smile said “This, this is my family.” Matthew Schultz lept off the stage and finished the song in the midst of the crowd.

Before thanking the crowd, Schultz made his way back onto the stage as the rest of the band was leaving after a final bow. After everyone else had cleared out, Shultz put his kimono on for a second time before prancing off the stage with the pride that comes from a dignified hometown hero after performing an amazing show for the town that helped make him who he is.

•“All The Same” — Buffalo Rodeo

•“Right Hand On My Heart” — The Whigs

•“Six-pack” — JEFF and the Brotherhood

•“Be My Monster” — Sleeper Agent

•“Shake Me Down” — Cage The Elephant

•“Ain’t No Rest For The Wicked” — Cage the Elephant